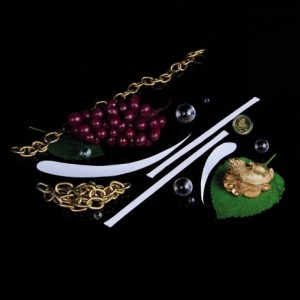 Is there any word more bastardized in contemporary culture than “ecstasy”? A concept that dates back to the Ancient Greeks, ecstasy as an overwhelming euphoria that renders time, space, and surroundings irrelevant — “the culmination of human possibility” — was pondered by everyone from Christian mystics to Existential philosophers, long before being co-opted by gurners on MDMA.

Divine Ecstasy, the second album by Chicago duo Supreme Cuts, takes its title from the traditional meaning of the word, rather than stoking the flames of the molly-obsessed zeitgeist. Similarly, the album eschews the conventional wisdom of what a full-length musical experience should feel like in 2014, be it electronic, experimental, dance, or pop.

The group’s first album, Whispers in the Dark, favored skittering percussion, a fog of filtered synths, heartbroken piano melodies and the mere suggestion of vocals, with rhythms that ran the gamut from Burialish garage to mile high hip-hop to hardcore-meets-footwork hybrids. Divine Ecstasy builds on this foundation, but with a newfound emphasis on live vocals. Rather than the stunt-casting found in some dance-pop albums, the vocalists here exist intrinsically and organically in the songs, their vocals weaved into the fabric rather than simply wearing it.

The music of Supreme Cuts has always fallen into a genre-agnostic mélange often described as post-everything. The term isn’t perfect, but on Divine Ecstasy, the pair continue to bound from R&B and hip-hop to house, rave and footwork, often in the same song. The glistening ‘Cocktails’ begins with a 4×4 heartbeat before it disintegrates into something appropriately woozy; on the piano-laced ‘Gone’, what starts as gently swaying R&B turns into a rat-a-tat club pulse, with ebbing and flowing synth stabs that tease a drop that never comes. (Singer Mahaut Mondino alternates between sultry and wispy on both ‘Gone’ and ‘On My Mind’; she’s the pair’s best discovery.)

The album’s finest moments flirt with the ecstasy of its title. The house groove on ‘Envision’ pumps adrenaline before revealing a widescreen sonic landscape; by the breakdown, the song threatens to drift into the atmosphere, but is built back up, one foot after the other, with a newfound exuberance. The spaced-out ‘Down’ wraps the booty bass of So So Def jams in layers of gauze, as JODY vocalists The GTW, Khallee and David Ashley contemplate the meaning of love, each in their own way. On ‘Faded’, the duo reach the pinnacle of their frenetic approach to percussion as an off-kilter beat quickly reaches the intersection of jungle, footwork, and club music, girding the divaesque machinations of underrated London vocalist Py.

As the album nears its end with ‘It’s Like That’, an Auto-Tuned Yen Tech sings “say the magic words / I don’t want to wake up, ” underscoring one of the album’s defining features. Often, the vocals are down in the mix, imbuing the proceedings with hypnagogia; the lyrics are just out of reach, like the details of a waking dream. And while that fits the hazy, transcendent tone of the album, some of the performances and lyrics would benefit from a cleaner presentation. But by the time the inspirational narration of ‘Epilogue’ fades out, it’s a minor quibble with an album that often reminds you of the true meaning of ecstasy.