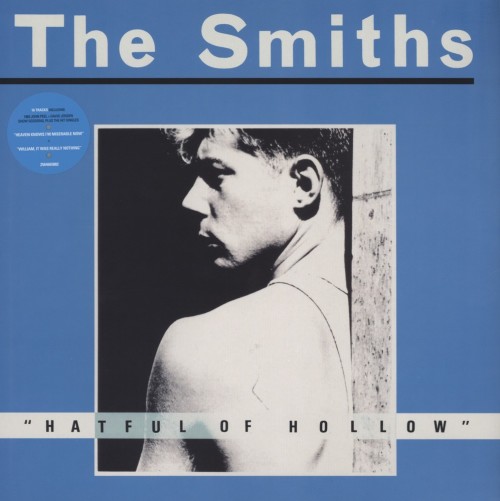 My Favourite Record is a new weekly feature, where we ask musicians we rate from across the spectrum to pick their most cherished album – a development of our occasional On Record feature, and a chance to take a peek at the albums that maketh the artist. Today’s entry:

“Like most things, The Smiths were something that my older brother adopted long before I found myself embracing them. I was initially reluctant; it wasn’t love at first listen. There was a lot to be reluctant about when first listening to a lad from ’80s Manchester who seemed to grieve his way through entire albums. But that was my view as a pre-teen, and it wasn’t until a couple of years later that I really immersed myself in their (criminally short) back catalogue. Their music is genius, namely for Marr’s unique guitar and Morrissey’s lyrical flair; a pairing so made for each other that it rivals Lennon and McCartney (though not quite with the same universal appeal).

“Hatful of Hollow was one of the last Smiths albums I bought, and at the time of discovering it, despite having exhausted all their studio albums, I had no idea Hatful existed. In a nutshell, the album is a collection of prior BBC Peel Session recordings, B-sides and singles; some of which were released on their first LP, but with the band not caring for the original album production.

“For the most part, this album benefits from the inclusion of the looser Peel Session counterparts (the only exceptions in my eyes being ‘What Difference Does It Make’ and ‘You’ve Got Everything Now’, though they’re close calls). What really makes Hatful, however, is the addition of tracks previously unreleased in album format, namely ‘Handsome Devil’, ‘Girl Afraid’, ‘These Things Take Time’, ‘William, It Was Really Nothing’, ‘How Soon Is Now?’, and ‘Please Please…’; all some of my favourite Smiths recordings. I have found myself listening to this album on more long journeys, have spent more so-called ‘alcoholic afternoons’ (coined in ‘These Things…’) bellowing along to Morrissey’s lyrics with peers, so as to render it my favourite album by default.

“There are arguably better all-round Smiths albums (The Queen is Dead), but Hatful has accompanied me further and on more occasions than any of their full studio efforts, or any other album for that matter. Ultimately, Hatful of Hollow bled its way into my life so gradually and naturally that I didn’t realize until writing this feature just how big a part of me it is. It’s funny and melancholy; delightful and heartbreaking; and it’s not for everyone. It’s The Smiths at their best.”

Heckle’s excellent Desolate Figures LP is out now on Tabernacle 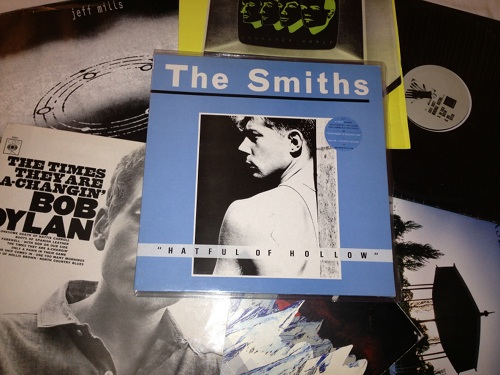 Heckle’s copy of Hatful of Hollow, “seen pictured amongst some other favourites”