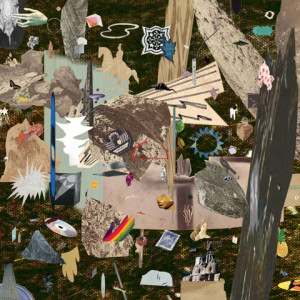 “Hierarchy is illusory. Concrete value systems cloud thought and block experience.” So declared patten in response to a pretty straightforward question about the context in which his second album should be heard. I find myself increasingly fascinated by this London producer’s interviews – more so, perhaps, than his music. In that Fader piece he comes across a bit like the class smart aleck who, bored by the pace of the curriculum, decides to make life difficult for everybody else. The press drive around 2011’s GLAQJO XAACSSO yielded diverse but similarly unusual responses.

Even though we know little about patten (his face remains partly obscured in press shots, and his real name is given only as “D”), in these moments a strong personality shines through: that familiar web-age archetype of the Wiki autodidact, the tireless overthinker, the maximalist. This is just one of the things that makes patten and his music so thoroughly, admirably modern. Another is the level of grammatical control he exercises over his output (his name, we are told, is strictly lower case; his album and EP titles all caps). After all, these faintly pathetic vanities of presentation suddenly become quite important when all music discourse is web-(i.e. text-)based. Yet another, of course, is the character of the music itself: dense, hyperactive, relentlessly hybrid. Like Actress played at 45rpm, patten’s gnomic beatloops form, flicker and then dissolve, leaving us entranced but, mostly, none the wiser.

In many respects ESTOILE NAIANT is how Warp’s catalogue ought to be sounding in 2014: not beholden to the aesthetics of ’90s IDM, but to its spirit of acceleration and abstraction. Source styles and rhythmic disciplines are detectable in places – ‘23-45’‘s molten synth-smears, for example, recall vintage Oneohtrix, while ‘Pathways’ sounds like half-assembled grime, its dusty lasergun peow!s carrying a surprising amount of pathos. But patten collides his materials at such high velocity that they tend to fuse into entirely new compounds. Grooves are somehow both slow and fast at once (opener ‘Gold Arc’), or they twitch and convulse in an asymmetrical manner (‘Winter Strobing’, ‘Key Embedded’); sounds are combined in unexpected, unstable ways.

Unfortunately, this tireless small-scale invention comes at the cost of the bigger picture. As with its predecessor, this album is relentlessly, exhaustingly dense, even when it shouldn’t be (the mostly beatless ‘Here Always’, for example, is as overloaded as the rest). Central to this is the fact that, for all his facility with texture and rhythm, patten’s handling of structure is fairly simplistic. Ideas don’t develop or change, they simply accrue. A thing appears and becomes, over time, more cluttered. In some places this works – as with the strangely alluring ‘Winter Strobing’. But most tracks exceed a threshold of tolerable density somewhere around the midpoint, and from there each successive layer of micro-detail just adds to the sense of fatigue.

All of which seems a pretty good analogue for patten the interviewee, whose bootstrap theorising doesn’t appear to reflect a concern with clarity of expression. In patten’s world the fizz of intellect is an end in itself, rather than a means to some sort of insight. Which is enjoyable in moderation, but mostly just frustrating.