Premiere: watch Clark’s video for ‘Superscope’, produced by Vincent Oliver with an oscilloscope 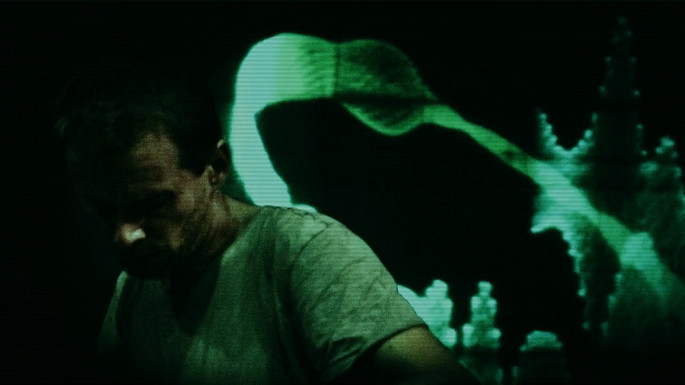 On March 10, Clark will release a new 12″ for Warp titled ‘Superscope’.

Today, we premiere the video for it, which was produced by Adoxo‘s Vincent Oliver and centres around the use of an oscilloscope that was discovered in a skip — “a type of electronic test instrument that allows observation of constantly varying signal voltages — in this case a stereo audio signal.” The technology is also used on Clark’s new Phosphur live show.

Confused? Yeah, we were a little too. We sent Clark an email to find out exactly what this all means (man): scroll down to read his unedited answers and to check out the video.

So first off, how did you find the oscilloscope? Did you find it in the skip, or did someone else and you bought it off them? And if you did find it, what were you looking for in the first place?

We didn’t find it inside Lars Ulrichs ego. Or in a brothel in Greenland. Or in the orbit of Saturnz Ringz. We found it in a skip. Why would that be relevant though? Where did you buy your computer that you write with for FACT magazine?

It’s certainly no retro fetish thing. Vincent paints elegant future-bound geometry on it. Oscillators have got this visceral upfront quality when projected, having a laptop playing prerecorded visual material just wouldn’t fit with this show.

This is live, analogue. As is alot of the music. Glove/Hand/Fitting/Nicely etc.

We’re told the video relates to your live show – so is the live show these ideas expanded, on a different scale, or what?

It relates to the live show because it’s proper molten luminous Swarfega. I want it to freshen up peoples minds from gunk in the way that Swarfega liberates the flesh from grease.

It needs to match the sounds coming out of the speakers. Blowtorched plastic. Steel turning into wood then turning back into steel and then being drenched in peak-rave-swarfega again. Ad infinitum. For precisely 60 minutes.

The press release describes your new record as “a return to the classic techno sound with a progressive angle” – what exactly does that mean? And what should we expect from it?

I guess one way to see it would be in a parallel to certain movements within drum and bass. It’s like Photek doing his version of a jump up Krust tune or whatever. ‘Superscope’ is a basic acid tune but framed with a spaced out saturated glint in its eye. There is more dynamic, less emphasis on that upfront brittle 303 squawk, and more focus on the intervals that go between the events. The form is consistent and sure there are rules that dancefloor convention still maintains as relevant, but there’s plenty of fluid space to explore around that.

‘Superscope’ was an impenetrable loop that haunted me for ages. It seemed to hide every time I tackled it.

It’s always the ones that hide eh.

So I spent about 3 days on the hi hats that creep in,  I thought ‘I’m on to something here’.  Then I was jammy and made that huge slab of granular noise that comes in at the end, total accident. I thought ‘oooooooooooh-yuuummmmmm’ animal noises eclipsed language.

The rest was peachy, effortless. It’s a fun thing; loving hi hat patterns to an excessive degree can turn a little live show loop in to a full track. It’s unashamed to linger too, I’m sick of writing short tracks.

‘Riff Through The Fog’ I finished in Brussels, my friend was doing a residency thing there. After some exceptionally strong Margaritas I was banging on to her about how fog would appear with strobing beacons of light periodically torching through it, monoliths of white light breaking up the dense mist sort of thing, it was an inspired rant, I enjoyed myself anyway.

And then white light/white noise visual/sonic parallel fed into the noise shards that punctuate the end of ‘Superscope’. I think that’s what coined it as a 12″. It was watertight, conceptually, sonically, and even though it’s only 2 tracks it took ages to get them to this point, I certainly prefer it to my old techno 12’s.

I’m glad you didn’t shove a dictaphone in my face and interview me about my music then anyway. Cheers for not doing that, heh.

It’s weird cause it’s a modest little ascending holding tune for quite a while and then it goes all widescreen and sorrowful/knarly at the end.

It would be weird to do it the other way round.

Climax is still important, after all these years. I reckon someone should invent a form of MDMA that gives you the comedown first, and then the peak. Lars Ulrich might be on that now…he’s Dutch isn’t he?