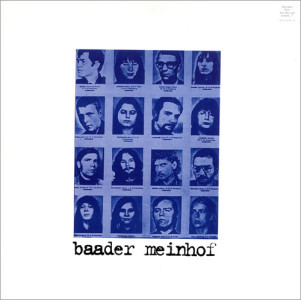 In October 1994, in the Spanish seaside resort of San Sebastian, Luke Haines, then midway through a European tour with his band The Auteurs, throws himself off a 15-foot wall onto solid concrete, shattering both ankles, fracturing his vertebrae, and necessitating a lengthy period in a wheelchair. The tour is finished, and soon enough this line-up of The Auteurs will be too. Over the course of the next two years, though, Haines writes and records a pair of records which seem conceived in a similar spirit to this drunken night-time leap. You could call it self-sabotage, perhaps, but that would be to overlook their continuity in an idiosyncratic sort of career trajectory.

The first of these two albums is The Auteurs’ 1996 album After Murder Park. Recorded with bone-dryness by Steve Albini, it collects a number of feelgood ditties like ‘Unsolved Child Murder’ and ‘Light Aircraft On Fire’, and is released in a week where Oasis’ (What’s The Story) Morning Glory stands vainglorious at the top of the charts. The second is, to all intents and purposes, Haines’ first solo album, but it goes by a different name: Baader Meinhof by Baader Meinhof.

How a man at the periphery of Britpop came to write a morally ambivalent concept album about a West German terrorist gang demands a little context. Baader-Meinhof – or, as they called themselves, the Red Army Faction – were born out of the German student protest movement of the late ‘60s, a dissolute group of young militants convinced the modern state was riddled with the remnants of Nazism, and had to be taken down by any means possible: bombs, kidnapping, political assassination, that sort of thing. Haines, meanwhile, had been hailed in the UK music press as one of the architects of Britpop following The Auteurs’ 1993 debut album New Wave, but loathed the movement and all of its participants, and decided to use his knowledge of the blueprints to take the whole thing down. Come the making of Baader Meinhof, he wasn’t bothered if his career went up in flames at the same time.

It didn’t quite pan out that way, though. Baader Meinhof might have been conceived as “sonic terrorism”, but by the time Haines had assembled a group of session musicians and a studio of equipment – an odd assemblage of tabla drums, cello, bass synths, a clavichord and a Vox Univibe apparently once used by Joe Meek – it was plain this record was coming to occupy quite different music territory. Minimal, strummed acoustic guitar is backed by sweeping strings, handclaps, and occasionally – as on ‘There’s Going To Be An Accident’ and ‘Kill Ramirez’ – squelching synth-funk riffs that owe a debt to Funkadelic, Parliament and KC And The Sunshine Band. Sonically speaking, it’s all quite sunny, actually, save for Haines’ voice, a thin and cruel thing that curls like a scorpion’s tail.

Baader Meinhof succeeds, chiefly, because Haines had clearly done his homework. Pitched somewhere between a crime serial and a hallucinogenic West End show, its lyrics are a collage of news reportage, revolutionary rhetoric and biographical exposition. As a piece, it eludes any clear sense of narrative, but Haines’ careful, detailed writing proves curiously evocative: a portrait of extreme minds in extreme times. ‘There’s Going To Be An Accident’ is dedicated to Petra Schelm, an RAF martyr, shot dead by police at the age of 19 as her BMW crashed through a police roadblock. The slyly funky ‘Mogadishu’ is themed on the 1977 hijacking of a Lufthansa aircraft. On ‘Meet Me At The Airport’, a veteran revolutionary and a new recruit talk commitment: “So we talk for hours/and we talk religiously/and he said ‘Could I take out every woman and child in a border town?’” One song is titled ‘… It’s A Moral Issue’, although for Haines, it really isn’t; this is an album high on ideological fervour and damn the consequences.

This extended reissue collects a handful of extra tracks, including lost B-side ‘I’ve Been A Fool For You’, where Middle Eastern strings and ringing gongs are employed to service a wickedly beautiful dedication song restating the album’s militant themes: “These are violent times indeed…” Then there’s a number of remixes, including the Muslimgauze-like ‘Baader Meinhof (Confrontation Remix)’ and a rebuilding of ‘There’s Going To Be An Accident’ by Mike Paradinas that slices up the original and recasts it as choppy avant-jungle.

Baader Meinhof, as it happens, didn’t kill off Haines’ career. On the contrary, just a few years later, he was back on Top Of The Pops with his new band Black Box Recorder. Baader Meinhof, too, would prove a sort of template for future thematic excursions, such as Haines’ self-explanatory 2011 LP 9½ Psychedelic Meditations On British Wrestling Of The 1970s And Early ‘80s. Baader Meinhof, though, still sounds like a highlight of the Luke Haines canon. Sonically adventurous, morally unconscionable, fastidiously executed; you couldn’t recommend it on good taste grounds, but you certainly can’t doubt its devotion to the cause.