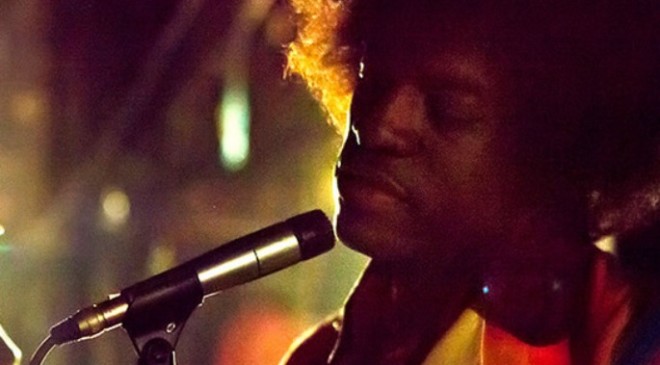 Jimi: All By My Side producer says he “bet the house” on the Outkast star in the title role.

The producer of the forthcoming Jimi Hendrix biopic has revealed that Andre ‘3000’ Benjamin spent six hours a day rehearsing for his role as the iconic guitarist.

“The idea of anyone playing Hendrix, let alone a right-handed guitarist, was one of the greatest challenges of the project, Danny Bramson told Billboard. “We bet the house on our one and only choice, Andre Benjamin.”

He added: “I found a really patient teacher and put together a regimen for Andre when he came out to Los Angeles. He sat in a small studio, six hours a day, putting in dedication [to learn how to play left-handed]. His guitarmanship had to carry the idea of grace and fluidity. John [Singleton, the film’s director] and I declared that we didn’t want to have the camera cropped on his face and not the guitar. He kept working in a rehearsal room throughout the production.”

Because the Hendrix estate refused to give permission for the use of any Hendrix songs, the filmmakers were forced to get creative in presenting the guitarist’s legendary skills.

“The most serious of the challenges,” says producer Danny Bramson, “was the responsibility of creating and recording new and original material that puts you in the environment of interpreting Hendrix. I needed a guitarist with the skill and dexterity, but also that X factor of malleability where you can transcend your ego and personal styles and licks and let the musicology of Hendrix shine.”

Guitarist Waddy Wachtel was picked along with bassist Leland Sklar and drummer Kenny Aronoff to create original music interpreting Hendrix’s evolution as he entered the spotlight in 1966 and 1967. The film also includes dozens of recordings from the likes of Dylan, Buddy Guy and T-Bone Walker.

Watch a clip of Andre 3000 in the role, alongside Imogen Poots as Linda Keith: