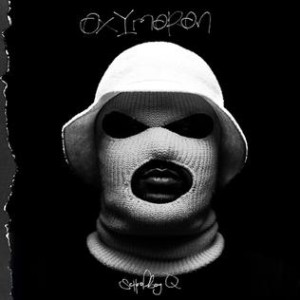 Black Hippy is one of the most innovative and exciting collectives to happen to rap in the last few years, and ScHoolboy Q, in many respects, is its most unadventurous member. In the context of Kendrick’s knotty dramatisations, Jay Rock’s thug boasts or Ab-Soul’s paranoid, insular meanderings, his druggy gangsta rap feels almost old school, his formula – street raps smoothly delivered over top-of-the-range beats – giving execution precedence over original ideas. In keeping with that relatively predictable nature, Q’s debut major label record is everything you’d expect, an album where expensive beats are a perfect fit to the excellent rapping and star-studded guest cast. And, again as you’d expect, that’s no bad thing.

The opening bars (“Gangsta, gangsta, gangsta, gangsta”) make Oxymoron’s themes all too clear, setting the tone for its tales of Crip life. Q’s default state is one of barely contained rage. Fuelled by gangsta hate, his grainy timbre and forceful cadence make even the most innocuous lyrics sound vicious. Take ‘What They Want’, a track that’s lyrically unambitious (“This the shit that they want / This the shit that they need / Tell me where are you from / Drop your pants to your knees, girl I’m capital G”) but full of menace thanks to Q’s snarling flow. ‘Hell of a Night’ is a twisted DJ Dahi banger, but the predicted drop never materialises, and the effect is weirdly disorienting as Q’s rapid-fire raps cut through oohing vocal samples.

Q has a great ear for beats, and the production on Oxymoron is every bit as impressive and ranging as on Good Kid M.A.A.d City – and proof that he can rap his ass off over just about anything. The heavyweight producers on Oxymoron bring their A-game. It’s not quite ‘Suicide’, but Pharrell’s sparkling synthy beat on ‘Los Awesome’ is miles from his recent poppy schlock, and ‘What They Want’ is golden Mike WiLL Made It, the drank-bleary beats a perfect fit with 2 Chainz and Q rapping at the bottom and top of their ranges. Alchemist’s piano-led beat on ‘Break the Bank’ is top-of-the-range stuff too, with an old-head vibe that ‘Blind Threats’ shares, with a mournful vibraphone sample that works beautifully with Q’s sober, reflective mood and Raekwon’s vengeful verse.

With its mix of party songs and downbeat, druggy tracks, Oxymoron’s closest current thematic counterpart isn’t Good Kid M.A.A.d City or Control System, but Danny Brown’s Old. And like Brown, for all the ebullience of ‘Collard Greens’ or ‘Man of the Year’, with its endlessly catchy “Titty, ass, hands in the air” hook, the best tracks are dense and thorny. Q’s on best form not when he’s spitting rage but when he’s reflecting: ‘Hoover Street’ is a warped street song with an ‘It Ain’t Hard To Tell’ sample and straight-talking lyrics: “Since a young n***a I admired the crack sellers, seen my uncle steal / From his mother… Think about it, the smoker ain’t got shit and everyday he still get a hit / Whether jacking radios or sucking dick.” ‘Prescription/Oxymoron’ is a clear highlight, Q revealing a touching vulnerability and regret with confessional raps — “My daughter calls, I press ignore… the karma’s worse / I cry when nothing’s wrong” – over a mournful beat peppered with samples of a little girl asking, “What’s wrong Daddy… wake up!” It’s heartbreaking stuff, all the more so for being so anomalous.

The album’s length – an hour and a quarter including the extra tracks – and uninspired sequencing means moments of brilliance, like BJ the Chicago Kid’s hook on ‘Studio’ or Kurupt’s verse on ‘The Purge’, just get lost. Its stock lyrical themes wear a little thin, too, so while Oxymoron is never dull, thanks to Q’s indisputable skills as a rapper and beat selector, by its conclusion you’ll wish he’d given less of its runtime over to his gangsta persona and more to exploring his own identity.