“I can’t compare this Madlib shit to anything else”: Freddie Gibbs on new album Piñata 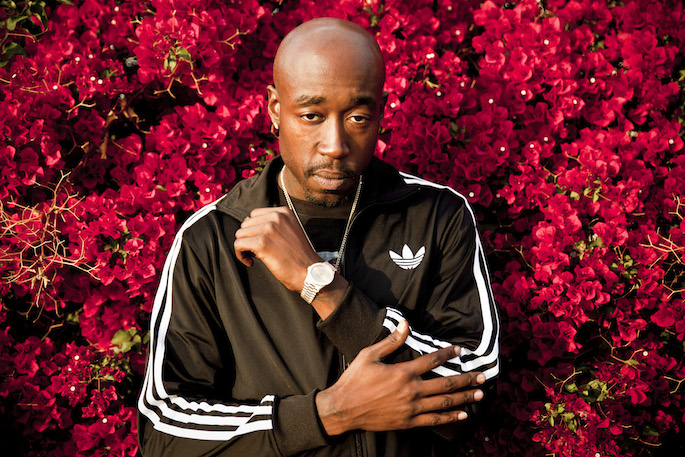 The world’s preeminent gangsta rapper talks about his long-awaited collaborative album with Madlib and more.

Los Angeles-living, Gary, Indiana-repping rapper Freddie Gibbs has been at it for nearly a decade, carving out a niche as an unapologetic hustler with a tried-and-true style unlike anyone else in hip-hop.

Since 2011, some of his best material has seen him paired with crate-digging producer nonpareil Madlib. The duo’s long-awaited album Piñata (formerly Cocaine Piñata) is finally out, and it expands the ‘Thuggin’ template for over an hour of dusty, modern-age Blaxploitation soundtrack material, with features from both veteran mafioso rappers (Raekwon, Scarface) and hip-hop’s new class (Danny Brown, Earl Sweatshirt, Ab-Soul).

We spoke to Gibbs about working with Madlib, lessons from a decade in hip-hop and his plans for 2014.

How did you first connect with Madlib?

You know what man? We just got mutual friends; it was nothing crazy, we just respect each other’s work. I wasn’t hip to his shit before, but I was grateful for the experience and it definitely helped me expand myself musically.

What did you try to do with Piñata?

I didn’t want to make no bullshit, I just wanted to make some cool shit. We did a couple songs, and people wanted to hear a full project. He’s from a different world, and I’m the best rapper to rap on his shit. I’m the best rapper on a lot of shit [laughs] so I was happy to have the opportunity to do it and set myself apart.

“I’ve lived longer in LA than Tupac did.”

This is his album, I just did my thing. He’s definitely the star of the album; his fans are definitely gonna love it. I’m just glad I was on it. It’s just gonna be one of those classic records. I can’t compare this Madlib shit to anything else; this shit is off the wall, I dunno.

You’ve been in LA for a while now. What is it about California that has kept you there?

Cali just breathed new life into me, when I was struggling in Gary. Between my musical experiences and my experiences in the street, I’m practically an LA native now. I owe a lot to this city, and that’s just me paying homage to it. I pay homage to Gary all the time, but home is here now — I’m ingrained in the streets here. I got love for everywhere in LA, I’ve got love and respect for the culture out here.

The Tupac sample on ‘Lakers’ is interesting, because while most people associate him with California, they might not know about his East Coast roots.

I’ve lived longer in LA than Tupac did [laughs] and he’s West Coast to the fullest. I feel the same way, from LA to the Bay, too. I’m with the West Coast all day.

Along with Atlanta and Chicago, it’s definitely having a good moment, whether it’s TDE, DJ Mustard, or even Odd Future.

A lot of people here to be doing their thing — it’s the best place to be making music.

Like you say on ‘Robes’, it’s clear that rappers are gonna need more Master P record deals than TLC ones. What was your takeaway after your major label experience?

Shout out to my partners at Empire for helping to turn ESGN into a label — a working, functional label. The numbers we do independently, keeping costs down… I’m doing pretty good. I’m out by my pool [right now]. I’m straight, my girl’s straight, my mom don’t have to worry no more. I’m not in the same place I was a few years ago. I’m not in the same struggle, but I still relate to it and respect it. When I rap, you’re getting it from a different perspective, but that hunger and struggle, even on the Madlib album, is still there.

I’ve gotten richer in the process, but I’m still thugging, doing what I gotta do. Thats what we were doing that week [when ‘Thuggin’ was recorded], robbing something that week, cooking crack that week. That’s why people fuck with me, for one, you’re not gonna find too many authentic guys. I can respect that, it keeps me going. That’s what my fans want.

I read an interview where you said you’re trying to be the new Master P. Between that and acting on The Hustle, are we going to see something like No Limit Films?

ESGN Films is coming soon, that’s a real deal thing. I’m working with Dame Dash to put some things together film-wise. We’re working with Jonah Schwartz and he’s the best director in the game; we put together the ‘Thuggin’ and ‘Shame’ videos with him. We definitely gonna have a film and start shooting soon.

If you could give yourself some advice back in ‘04, what would you say?

Stay true to yourself. Don’t fuck with no rappers. Don’t fuck with Jeezy; I know you love him, but don’t. Stay focused, stay headstrong, remain you. I probably needed somebody to tell me that shit.

I’m just glad I’m at where I am, and that’s from God. I don’t really do the organized religion thing with fake ass people, I just do my thing, and try to find something positive out of every situation.

I’m doing a tour with Tech N9ne, dropping [second solo album] Eastside Slim. I’m blessed to have rap be my real job — a lot of motherfuckers wish it would be their real job.