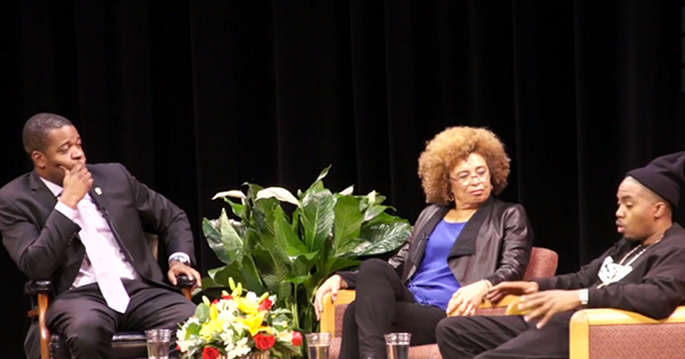 Earlier this month, Nas took part in an eye-opening discussion on the state of the US prison system.

The talk took place at Lehigh University on March 10 under the aegis of the university’s Martin Luther King Jr. planning committee. Moderated by James Peterson, the university’s professor of English and director of Africana Studies, the talk centred around “Mass Incarceration: The Prison Industrial Complex.”

The discussion saw Nas share a stage with major civil rights campaigner Angela Davis – professor at the University of California-Santa Cruz, author of a string of books on prison reform, and Nas’ personal “hero”.

Running to well over an hour, it’s a meaty, engrossing discussion, discussing the genesis of the US’s active prison system – around 2.5m people are incarcerated in the US in present – and the possibility of abolishing the prison system altogether.

Head here to watch; skip to 33:30 for the start of the discussion in earnest.

Nas has made regular cameos in FACT’s news section this week: he contributed a Bedtime Mix to Annie Mac’s Radio 1 show this weekend, and an unreleased track from the forthcoming reissue of Illmatic has also hit the web.