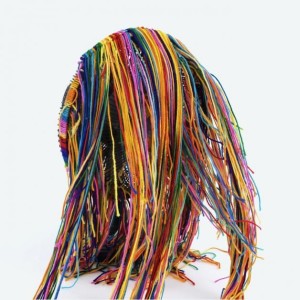 When Liars announced that they were going full electronica for 2012’s WIXIW it seemed only a matter of time before we’d be treated to the first proper Liars dance album. After all, you arm a trio of one-time disco-punks and craven hedonists with big fucking machines and there’s only ever going to be one outcome. But because Liars’ music has been repetitious and rhythm-led from the start, the transition to dance is a logical one – and once WIXIW‘s all-out techno rinser ‘Brats’ emerged, it always seemed like a likely one.

Mess is precisely the dance record you’d expect Liars to make: dirty, death obsessed, corrosive and in each respect, gleefully so. Suffice to say, it’s light on the whole Dalston deep house/beige bass side of things. The majority of the tracks build on the ‘Brats’ formula of distorted FX, industrial dance, metallic beats and pounding tempos. Openers ‘Mask Maker’ and ‘Vox Tuned D.E.D’, a couple of the most lairy, over-the-top and all-out vainglorious examples of hard dance music you’re likely to come across, mix mid-’80s disco and brittle EBM to marvellous effect.

Doom and camp debauchery exist hand in hand on Mess, especially on the symphonic power-tool-disco of ‘Vox Tuned D.E.D’, apt to bludgeon you with Russian steel one minute and shake its cute Eurotrash tush the next. ‘Pro Anti Anti’ merges Hacienda house and digital hardcore for an oddly euphoric strain of Northern European nihilism. When Liars assured us that they intended to have fun on this record they weren’t kidding, and with all this devil-may-care revelry finally the tenor of angst that’s forever underscored their sound has melted to nothing.

Though it’s the blueprint, changes have been made to the ‘Brats’ formula. Most significantly, now the dance tracks come with added rhythmic swing. While ‘Brats’ was a funkless foot-stomper in the DAF/Skinny Puppy vein, on the likes of ‘Vox Tuned D.E.D.’ there is accent and syncopation aplenty. Tracks like these demonstrate just how far the trio have come – no longer do they sound like indie boys coming at programming from an indie boy standpoint. Though purists may see it differently, the band could easily could pass as card-carrying dance producers on Mess.

That said, every now and you can still detect the beating heart of a rock band. ‘I’m No Gold’, for instance, has something of the rave-rock trappings of ’90s big beat about it, while ‘Mess On A Mission’, though by definition a techno track, vaguely resembles a kind of sped-up Nine Inch Nails. In both texture and construction, specifically the track’s tip-of-the-tongue reference point is Reznor’s recent industrial cover of ‘The Immigrant Song’.

But not only is Mess Liars’ first ‘dance album’, it’s also their most pop – the Liars’ sound distilled to a motorcade of hook-after-hook insta-gratification events. Throughout, set-up follows massive pay-off follows set-up, and as a result, though the pace slows in its latter half to make way for more thoughtful fare, this is undoubtably the least subtle record of Liars’ career. But then shallowness was always the plan. On Mess, surface is meaning, with the album’s vacuous hedonism merely another expression of the theme of spiritual oblivion that Liars have explored ever since their debut.