“What if your kid was a werewolf?” Animal Collective’s Avey Tare on haunted houses and Sesame Street 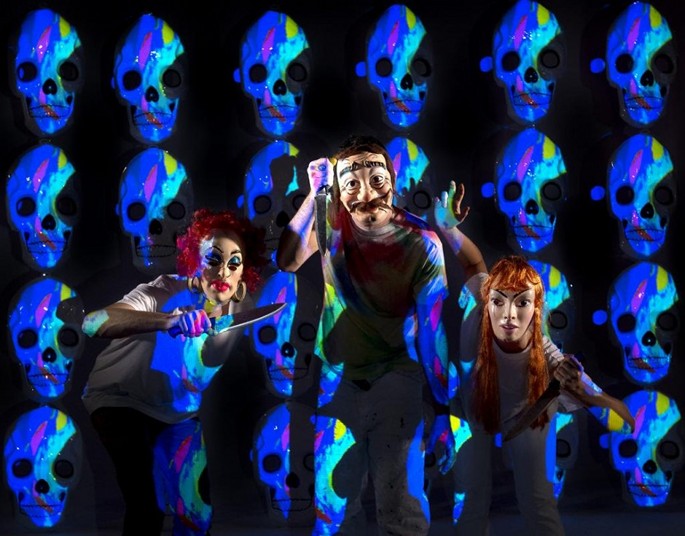 Dave Portner, aka Avey Tare, is most celebrated as a member of Animal Collective, the hippyish Baltimore-bred art-rock group who hit it unexpectedly big in 2009 with the release of the rave-flecked Merriweather Post Pavilion.

“A group of three hippies on a road trip through the backwaters of 2013’s rural music scene fall prey to a murderous cannibalistic band,” goes Portner’s billing. But there’s no post-Death Waltz giallo synth creepiness here. Instead, their debut album Enter The Slasher House, out April, sees Portner’s playfully twisted conceptual pop songs play out against an endearingly dynamic backdrop, given life by Deradoorian pulpy keyboards and Hyman’s wild, free drumming. FACT caught up with Portner to talk haunted houses, horror cinema, and the Jim Henson-assisted video to their new single ‘Little Fang’.

Where did the Slasher Flicks name come from?

Well, I’m definitely a fan of horror films. I’ve always liked the idea of haunted houses, abandoned houses – I used to love exploring those kinds of things. There’s an element to making a record that’s kind of like exploring a haunted house. It’s sort of exploratory. You get startled by things. And as we were writing these songs, and starting to record them, the idea really stuck in my head.

Did you go to a lot of funfairs as a kid?

There was this travelling state fair that would come to Maryland every summer. Even when we were in high school, it’d be a cool place to go and hang out. I always liked those cheesy funhouse vibes. My dad is from the shore, from the New Jersey, Atlantic City area, and when I was growing up we used to go to the Ocean City boardwalk. They had tall these old funhouse rides, and there was this old haunted house ride there that they’d closed down. But it stood there for a while, and it had this really ominous vibe. It burned down, in the end.

As this stuff ages, and gets decrepit, it develops a second degree of creepiness.

Yeah, for sure. You’re not allowed inside of it, which creates even more mystery around it. People start telling stories about it, gossiping about why it burned down, and did someone die in there?

Of course, Animal Collective have already made their own horror movie, of sorts – your gory, oozy visual album ODDSAC.

Yeah, but that was a little bit more of [director] Danny Perez’s vision. While I love horror movies, I don’t actually really gravitate towards the slasher movies or the gore movies. I’m actually more of a ghost person, I think.

What are your favourite films along these lines?

The old House On Haunted Hill, that’s a classic. The Shining is one of my favourite films of all time. There’s a lot of great Japanese ghost movies – there’s a collection, Kwaidan, which is wonderful. I feel like the Japanese come from a traditional ghost story background that don’t really have here in America. You have it in Britain too, I guess. The Japanese ghost story was kind of resurrected in the late ’90s and early 2000s, with films like Ju-On. But there’s a lot of really good older ones, dating back to the 60s.

Have you had supernatural experiences?

I haven’t really. I thought I saw a ghost once. Josh from Animal Collective and I rented a house upstate from New York that he lived in and I just stayed in for a while. A guy had died in there, from cancer, and there was that sense his spirit was still there. I had the sense that he was there, sitting on my bed one day, when I woke up. Like, a really brief glimpse of it. Growing up, my brothers used to tell me all these stories about the house that I lived in, and I was never really sure what to believe, because it never really happened to me. My good friend and former roommate Eric [Copeland, Black Dice] grew up in a haunted house, and I feel like I know people who have had direct ghost experiences, so I feel like I kind of live vicariously through them.

On the video to your single ‘Little Fang’, you worked with your sister Abby Portner.

Yeah, she kind of took the reins on that one.

I was wondering how far back your creative partnership went.

We’ve worked together going back a really long way. Even growing up, we both did art and music together – we used to make videos together all the time. We had this window in our house that was like a stage, and we’d film each other lip-syncing to songs. What we do now, it really feels like a continuation of that. When she was at art school in New York, she did and installation, and we worked together on music for that. The next time we worked together, I had an idea in my head for how I wanted the cover of the Animal Collective album Sung Tongs to look. Like, do you think you could do this? And what she made was close enough to exactly how I imagined it. From then on, she started working with us more and more. She’s done T-shirts, album artwork – when we were doing Merriweather Post Pavilion, she did a video for ‘In The Flowers’. She’s really grown into it.

And she worked for Jim Henson’s Creature Shop?

Yeah, she worked at their studios in Hollywood for a short time.

So what’s the song ‘Little Fang’ about?

Well, I started with it being about our cat. Angel and I have two cats. The two cats have an older brother, younger sister relationship – the older one picking on the little one. Nenuk is the name of the ‘Little Fang’ cat. She’s a scruffy, longhaired little thing, and we’ve had her since she was a baby, three months old. Growing up, she was kind of out of proportion, she had these fang things that made her look kind of awkward, and it took her a little while to grow into her body. All my bandmates have kids now, and so I hear all these stories about preschool, how they might get picked on, what the teachers might say. It got me thinking about what a big challenge being a parent must be. So the song began as being about a parent having to stand up for their kid, or stand behind their kid, whatever they might be. Then it got me thinking, what if your kid was a werewolf? [laughs] Music tends to become that kind of fantasy world for me.

So we started talking about the puppet being this representation of the cat, and Abby got back in touch with the Creature Shop to design it. I wanted it to look sort of black and white – a sort of art nouveau pattern, not that exactly, but that sort of thing. And I think Abby got really into that, the film having a kind of black and white look. But because the music is quite psychedelic, we ended up filming in colour in the end, and because the colour looked so good in the funhouse scene, we blended some of it in.

Did you grow up with Jim Henson’s stuff? The Muppets, or Sesame Street?

I definitely grew up on Sesame Street. The Muppets was before I was born, but the reruns make it kind of timeless. The Muppets is just genius. It’s totally chaotic, it had a real comedic side. But also, if they had a host who was really dead on, up for it, it just comes across so well. It’s such a good way for an artist or an actor to promote their work. The way Jim Henson worked is pretty inspiring. It was really grassroots – he would do a lot of the voices, he was so hands on. On Sesame Street, I always really liked the animations. I really like art using numbers and letters – it’s something we’ve always referenced in Animal Collective.

You say that the songs on Avey Tare’s Slasher Flicks come from “a place that is not human”. What do you mean by that?

I think just while I was growing up, what I started liking about music was how it could be an environment to me. I would get really into a record, and the listening experience would present a new environment to escape into. A lot of the time, I didn’t really think about the lyrics. Music, to me, isn’t about Bob Dylan, that singer-songwriter thing – purely on personal taste grounds, I’ve always veered away from that. Sometimes that gets taken into a world of like, the last Animal Collective record, which we wanted to sound really alien, foreign to people. Other times, it’s like creating an escape. I think it’s cool to take people away from their daily thoughts, their daily lives.