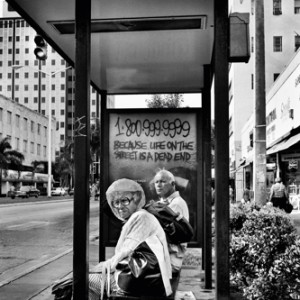 After four years dormant, something has set Millie & Andrea off again. Officially outing themselves as Miles Whittaker (of Demdike Stare) and Andy Stott, the pair have returned via a surprise debut album and a whole new (and old) set of considerations. Drop The Vowels is essentially a mongrel breakbeat album, built all wrong and full of off-kilter asides. But while stuffed full of familiar drum loops chopped in blocky, messy ways, it manages to be individual and different, mainly due to its wild production.

Only two tracks have the same crystalline, dubby rave quality of early releases: ‘Spectral Source’, whose dancehall bounce is run through a nest of cymbals and glassy bubbles; and, obviously, the 2009 single ‘Temper Tantrum’, whose HATE-like hardcore donks and whipped snare cycles are included here too. The rest of the record is as wide in style as their previous run of singles, but now purposefully overloaded and blown-out, a densely compacted sound with a different purpose and character.

‘GIF RIFF’ opens the record with a foreign folk song and deep resonant skin drum, thumb pianos and clattering metallic percussion set deep within a resonant chamber. ‘Stay Ugly’ is woodshop Gescom, a splintered baseball bat. For those unfamiliar with Millie and Andrea’s individual projects, ‘Back Down’ is what someone may have expected from their collaboration; slow, grinding washes of techno from filtered, red-lining bass, ethereal vocals and a buzzy 909.

Two particularly varied moments don’t quite fit. One is the finale ‘Quay’, as strange as it is lovely – somewhere between Badalamenti, Danny Elfman, and the orchestral warping of The Hers – but simply feeling out of place. The other is ‘Corrosive’, the duo’s scuzzy take on trap. With 8-bit arpeggios and hi hats zipping at 160bpm to match jungle breaks, it’s fun but sticks out by not really exceeding the sum of its parts like the rest of the album or its preceding trap single ‘Stage 2’.

But it’s a surprise – and to the duo’s credit – that Drop The Vowels doesn’t have more of these ‘x genre meets y genre’ moments. And despite being predominantly made from breakbeats everybody knows, it’s difficult to pinpoint how the pair keep the listener’s attention so well. Three quarters of the way through the record, as ‘Drop The Vowels’ opens with a lonely, stringy Hot Pants jungle break, their efforts finally seem to waver. But then a counter loop is chopped against it in absurdly simple fashion and the track is shocked into life, now low slung and prowling, suddenly one of the record’s best.

However they manage it, this album is a good example of how to revive twenty-year-old sample relics and construct new, wildly dilapidated material from them like they were so much reclaimed timber.