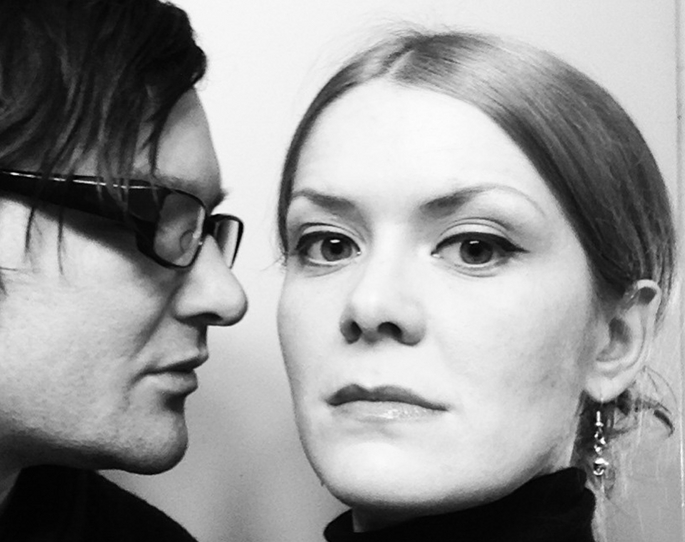 Even the name Clay Rendering evokes the principles of birth and growth that guide Mike and Tara Connelly’s new band.

Tara and Mike have been involved in countless other projects, both separately (The Pool at Metz, Wolf Eyes) and together (The Haunting), but it’s a drive to create something new that characterises Clay Rendering. To the husband and wife duo, it almost feels like their first band.

Clay Rendering have just released Waters Above the Firmament, their second EP for Hospital Productions. Its four immense songs take in ambient and pop as well as black metal and heavy rock – cathartic and intense, but underpinned by a touching vulnerability that foils the heaviness. Given that Clay Rendering is such a personal project, it’s unsurprising how excited Mike and Tara are about the huge scope it offers for them to explore new ground together.

What are you up to?

Mike: We’re playing a show in New York tonight. We’ve been loving touring. We did a bunch last year and we already have a lot more lined up this year. We’re a self-sufficient, highly mobile touring unit that can play anywhere!

Are you carrying on with The Haunting or focusing only on Clay Rendering?

Mike: Yeah, it’s kind of on the back-burner. We still love doing that stuff, and I think we’ll develop stuff that might fit The Haunting a bit more, but we’ve been focusing exclusively on Clay Rendering for a little over a year now. There’s a lot of cross-influence between all the projects, and they all kind of keep growing along with each other, especially The Haunting, or a lot of Tara’s projects. We’ll work on something in one project and apply it to the other one.

Tara: Mostly, we just enjoy playing together and being able to jam wherever we are, every day. It’s a lot less stressful! And we find a lot of strength working together. It’s nice to be completely honest with somebody and work on collective goals together.

How has Clay Rendering gone from an idea to the all-consuming project it is now?

Mike: In a lot of ways, we treated Clay Rendering like the first band we’ve ever done, but still using all the things we’ve learned over the years. We’re letting it grow and evolve. That’s kind of why we’ve been doing the first two releases as EPs, and we have a 7-inch coming out in a month or two. We’re excited about the stuff we’re just writing now, and we’re just trying to continue to develop and take our time developing that.

One of the themes that stands out for me on the Clay Rendering EPs is of rebirth and regeneration, so it’s interesting that you say that it’s like your first band. Does going into the project brand new, as it were, inform that very cathartic sound?

Mike: Absolutely. I think that’s very much what we went in to the band with — hitting the restart button, and being like, let’s do something completely new. You learn everything and then you throw it out the window and start over, and we’ve just enjoyed starting fresh and building this new thing.

Tara: You still use all of the skills that you have, you’re just putting them together in new ways.

Was there a particular event that acted as a catalyst for you forming Clay Rendering?

Mike: About coming up on two years ago, Tara had to have hand surgery for carpal tunnel [syndrome].

Tara: I’m a very strong right-hander, so I can’t do anything with my left hand.

Mike: She was recovering for about 8 weeks, but in that time she literally couldn’t use her right hand at all. So while she was recovering it was like we re-met each other because we were together 24 hours a day. I had to button her pants for her. I even learned how to put her eyeliner on! In that time, Tara was using her left hand, her good hand. She started banging out these sounds on a piano we have lying around, stuff that sounded really cool. I was like, let me try and add something to that and see what happens, and from there we just started growing.

Tara: A lot of time I’d be in a cast, sitting on the couch and playing piano with one hand, with Mike on the other side.

“I had to button her pants for her. I even learned how to put her eyeliner on!”

Of course the music’s very heavy in its way, but there’s a vulnerability to it that makes it even more powerful.

Tara: It was amazing! I’ve never had to be dependent on anybody so this was a really great learning experience, to depend on somebody else for all your needs. I’ve always been very, very independent, and this revealed a side to myself that I didn’t know I had. In a way, it kind of softened me and made me realise that it’s okay to need something from somebody else, and it’s okay to depend on somebody. I think that only made us stronger in the way that we work together.

Mike: For me, it’s something that I’ve always kind of shied away from, and I enjoyed breaking that and showing vulnerability. It was nice.

You said it’s great that you can be honest with each other. Apparently these four songs were written over two seasons, so are you quite ruthless with what you come up with and choose to include?

Mike: We thought some of the very first songs we wrote sounded great, but I can’t remember those songs any more. We’re constantly writing and cutting songs and moving on, because an idea’s just not good any more, or it’s just not where we’re at any more. With this EP, we had a lot of ideas, half ideas, and were like, what should we flesh out, what would be cool to take slow. And it turned out to be these four songs. But where we live, the seasons really affect everything.

Tara: This winter’s been so cold and we had two feet of snow, so everything became so introspective, because we were housebound by the weather.

Mike: The weather here is pretty drastic, so sometimes the only thing to do is to go inside and make music. This winter’s been the longest we’ve had in a long time, but we just stay in and write. We record at home but we’re in talks to go and record in other places, which is something I’ve never really done either. You know everything I’ve done has generally either in a house or a basement, recording to a four-track — very self-done. We love the idea of working with someone else and somewhere else, going somewhere for X amount of time and staying there.

Has this idea of a new start has informed your decision to release vinyl EPs rather than cassettes and CD-Rs and so on?

Mike: It was absolutely a conscious decision. Again, it was like, how can I do something in a way I’ve never done it before? On the first two records the text is black writing on white background and the entire time before I’ve done white on black. But now I wanted to make even that different, and put pictures on that record, which is also something I’ve never done before. It’s how bands used to do it —  a lot of EPs leading up to the first record. We like that model right now. We’re happy to take our time to flesh it out rather than rushing in.

The music draws on a lot of different styles; it’s not really one thing or another.

Mike: It’s one of those things that comes naturally, so every time we sit down and think too much, or aim to write this or that type of song, it never works. We seem to think it will, and it never does. It works when just by accident one of us will start playing guitar, or accordion or piano, and almost when we’ve given up, we’ll start picking things out. The best songs are written in a really short time and then fleshed out, and we’ll often combine songs —  one part of one song, one part of another. We don’t want to limit the way we end up writing but we always begin the best stuff by banging it out.

Now you’ve kind of established Clay Rendering as your main project, how do you plan to maintain that excitement of the new?

Tara: I think it’s just who we are. We’ve been together through art school and college since  thirteen years ago and since then we always just create and do things together. We’re really into aesthetic pleasure, like art and food and listening to things, and really just enjoying our lives, so I think that no matter what we do, we’ll be creating and trying to make the most of each other and our lives, and enjoy ourselves.

Mike: It’s just so cool to be in a band that’s just at the beginning. We’re just so psyched about all our ideas, and all we want to do is work on new stuff. It’s going to be a good year.