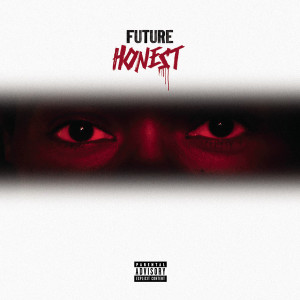 Here are the first four singles that preceded Future’s Honest: the controversial synth-blasted ‘Karate Chop’, the twinkling ‘Honest’, the menacing fuck-the-club-up bow-thrower ‘Shit’ and ‘Real and True’, a piano ballad featuring Miley Cyrus and Mr. Hudson. While two of those ended up as bonus tracks and one ended up in the bin, one thing was clear: if there’s anyone that can mix — with equal efficacy — rap and R&B, bangers and ballads, the street and the bedroom, it’s Future.

On Pluto, Future mostly told drug-fueled tales of conspicuous consumption, with heavy doses of Auto-Tune and astronaut metaphors. Apart from the romantic outliers, Future seemed content to play the part of hustler-turnt-rapper, only hinting at something more personal on songs like ‘Permanent Scar’ and ‘Truth Gonna Hurt You’. On the latter, he juxtaposed the usual boasts (“I live the high life, sexing, syrup and money”) with a confession: “Feel like sinkin’, I’m in sand / Some things you wouldn’t understand.”

On Honest, he’s ready to make the listener understand. The album starts strong, with Future oozing confidence on the full-throated boasts of ‘Look Ahead’ and ‘T-Shirt’. “Put the pussy on a nigga tongue / ‘Til the pussy juice runnin’ down my lungs,” he shouts on the lead cut, “Ain’t another better feelin’ / Like the feeling when a nigga make it out the slums.” This is a man who’s made it it, and on the next pair, the industrial-tinged, Mike Will-produced street tracks ‘Move That Dope’ and ‘My Momma’, he turns self-assurance into a sneer: “Godzilla ain’t got shit on me, nigga.”

And that’s when things get interesting, as Future pulls back the curtain and reveals the centerpiece of the album: four midtempo, sensitive-thug jams. A tribute to his ability to straddle genre, mood and themes, the title track toasts his rockstar lifestyle from within a humblebrag ballad, his Auto-Tuned coos in the background. He’s joined by Kanye on a (somewhat problematic) celebration of his love life, and by Drake on a too-short admittance that not everything is perfect on Pluto: “My pain still runnin’ deeper than the ocean,” he admits. The album’s most revealing song, ‘I Be U’, is also the most romantic and touching: “I’m naked, you naked, and neither one of us tryna look for a blanket” is less a boast than a poignant detail.

Future’s lyrical sensitivity wouldn’t work without the album’s pitch-perfect production. The sonic palette on Honest leaves behind most of the synth-bathed extravagance of Pluto as Mike Will Made It, Metro Boomin, Nard & B and company push the boundaries of the trap template, from the sinister gurgle on ‘Move That Dope’ to the acoustic guitar melody on ‘Special’. However, not everything breaks new ground: ‘Covered N Money’ is a banger, but it’s very reminiscent of something like ‘Bugatti’.

The exception to some of the production wheel-spinning and puzzling feature picks (Wiz Khalifa?) is ‘Benz Friendz (Whatchutola’)’, a Dungeon Family reunion that bounces over an Organized Noize-produced trunk rattler and sees André 3000 in classic form. Future steps up his game to go toe-to-toe with Andre; they sound at ease trading verses, and when the track cuts out and Dre goes elastic (“Throw a nigga one on the strength, then we might could talk / Til’ then, I will ride my fuckin’ bike, or walk”)? Chills.

“The album that you gonna get when it comes out is not the album I was working on when I first started recording,” Future told Elle (of all places) earlier this year. “The beats were slower, had more guitar riffs, just playing around with the piano more and with different instruments.” ‘Blood, Sweat, Tears’ hints at what an earlier iteration of the album could have sounded like: a swaying, orchestra-backed power ballad guaranteed to get lighters and cell phones in the air. “All I ever wanted for you was to believe in me,” he sing-raps, echoing the album’s main theme: “I came, I struggled, I made it, I conquered.” It’s a fitting close to an album that mostly sticks to its hustler-with-a-heart-of-gold narrative.

The deluxe edition bonus tracks are a bit confounding. After the spoken-word ‘Big Rube Speaks’, there are a pair of synth-kissed tales of devotion that sound like Pluto offcuts (‘I’ll Be Yours’ seems like it was stripped down and reworked into ‘I Be U’) and a trio of tracks that have been around the block. It might be quibbling, in an age when the listener can digitally decide which songs make up an “album,” but relegating the world-beating ‘Shit’ to a bonus track is a head-scratcher (especially when Future has described ‘Shit’ as the song that “flipped the whole album”).

Honest doesn’t have the shock-of-the-new that Pluto offered during its finest moments, which is understandable: Future’s Auto-Tuned weirdness has quickly become part of the Southern rap fabric. Future is no longer “a rebel amongst conformists,” moving in his own “eccentric orbit,” as Pluto‘s ‘The Future Is Now’ maintained: he’s the sun at the center of the Atlanta solar system, and on Honest, he knows it.