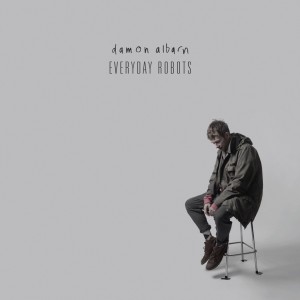 There have been clues that Damon Albarn has been moving in the direction of a solo album for some 15 years now. In this time, there have been concepts aplenty: cartoon pop stars, monkey operas, African cultural exchanges and albums about Elizabethan alchemists. Concentrate on signal rather than noise, though, and there’s been the sense of the sometime Blur frontman refining his voice, packing away the laddish yob-rock and arch caricaturing of Blur and working his way towards something mature, melancholic and adult.

Everyday Robots is Albarn’s first solo album proper (Democrazy, a collection of Think Tank-era demos which we probably ought to discount, aside). It was made with Richard Russell, MD of XL Recordings, with whom Albarn has struck up a fairly fruitful creative relationship, working together on Bobby Womack’s 2012 comeback album The Bravest Man In The Universe. It feels personal, in the way solo records often do – reflective, confessional, autobiographical – and while containing traces of Albarn’s cosmopolitan music interests – a steel drum here or a flurry of African percussion there – the music is relaxed and unobtrusive, mixing languid electronics with softly applied guitar, piano and strings.

There is a subtle concept, of sorts: modern technology, the world of touch screens, social media and interconnectivity, which Albarn appears to believe increases, not decreases the distance between us. On the title track, we’re “Everyday robots in control / In the process of getting sold”. “It’s hard to be a lover when the TV’s on / And nothing’s in your eyes” he sings on ‘The Selfish Giant’, backed by Natasha Khan of Bat For Lashes, while ‘Hostiles’ is a portrait of two lovers distracted by the wink of LCDs that warns “it’ll be a silent day between me and you”. It’s a theme that’s clearly there, albeit not that developed, and while Albarn may even have a point, it feels fogeyish and banal. This is what rock stars write about when life isn’t really that interesting: a vaguely jaundiced view of modern life in quiet, sepia decline. It’s that Banksy of a couple embracing, but checking their Facebook over each other’s shoulders. It’s Jack fucking Dee.

Luckily, that’s not all there is to Everyday Robots, which improves immensely when it veers towards autobiography. Albarn’s harsher critics have tended to paint him as a sort of grasping cultural tourist, but he’s more interesting than that, his best work infused with a rootlessness and class anxiety that probably speaks to anyone who grew up in that gulf between working class and middle, or in London’s outer orbit. The excellent ‘Hollow Ponds’ is a life story made of drifting signposts: his boyhood in Leytonstone sailing boats on the marshes; a snapshot of time spent in Turkey spying spiny urchins in the Black Sea; his move out to Essex, and the day “‘Modern Life’ was sprayed onto a wall / In 1993…” ‘You And Me’, as has been widely reported, makes reference to Albarn’s post-Parklife heroin use (“Tin-foil and a lighter, the ship across / Five days on, two days off…”), although it’s hardly a lurid commercial or plea for contrition; more an abstract sketch of a way a man at the height of his fame can find ways to fade from view, disappear in the London fog. Albarn’s voice, incidentally, has weathered nicely – a cracked and soulful thing with shades of Terry Hall or Robert Wyatt.

By and large, this is a downbeat record, one suggesting maybe Albarn recently had a listen to ‘Mr Robinson’s Quango’ and decided never to do ‘whimsical’ again. Still, there’s a couple of more upbeat numbers that work in neat counterpoint. ‘Mr Tembo’, a song about an orphaned baby elephant Albarn met in Tanzania, is sweet ukulele soul backed up by the Leytonstone Pentecostal City Mission Church Choir, while the closing ‘Heavy Seas Of Love’ is a gospel-tinged duet with Brian Eno that succeeds through its total lack of anything approaching irony.

So is this the real Damon Albarn? If so, do we like him? It’s true, there are moments on Everyday Robots where you wonder if, without the cartoon characters, the courtly scryers and the Chinese dragons, this 46-year-old dad has an awful lot of import to say about life in 2014. But in a recent interview with The Quietus, Albarn explained that making the album was like “an archaeological dig”. Taken on those terms – as an audio memoir, wending through the terraces of a storied past – Everyday Robots feels pretty satisfying. Solo career on track, then.