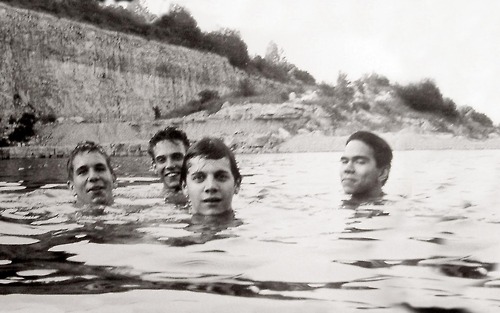 Miss the recent reissue of Slint‘s crepuscular classic? Not to worry.

The Lousiville band’s 1991 LP (our third favourite album of the decade, no less) can still drop jaws at will – spindly, dysphoric alt. rock, suffused with dread and threat. Last month, Touch and Go put out what surely counts as the definitive version of the record: a gorgeous deluxe box set, freshly remastered, and bulked out with 14 unheard demos and outtakes from the album sessions, plus the requisite coffee table tome.

Cheery news for those who missed the first pressing: on June 24, Touch and Go will give their souped-up Spiderland a non-box set reissue. The album will be available in LP and CD editions, with both accompanied by Lance Bangs’ Slint documentary Breadcrumb Trail on DVD. Both will also include a download code for all the alternative takes and demos previously buried in the box set, plus a scaled-down version of the book.

A limited run of green and black swirled vinyl versions will also be pressed. Earlier this year, we spoke to Slint about the album; head here to listen to Spiderland outtake ‘Pam’.