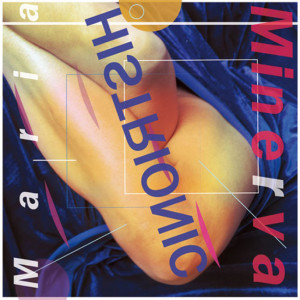 Available on: Not Not Fun

Since releasing her first record Cabaret Cixous in 2011, Maria Minerva has carved out a small but unmistakable niche at the leftfield end of bedroom dance music, coming to embody the idiosyncratic DIY aesthetic of labels Not Not Fun and 100% Silk. But her sound has always been more distinctive than the bedroom disco tag implies, as likely to draw from Indian and Middle Eastern musics as from Chicago house and Arthur Russell. Her newest album Histrionic, written following a move from London to New York, turns to current club music for inspiration, and although Minerva largely eschews the tape hiss and fuzzy sound of earlier albums, it also feels like one of her most densely packed records to date, each song teeming with activity and fizzing in a dozen directions.

Much of Minerva’s appeal has always lain in the fact that nobody sounds quite like her. In keeping with that, the airhorns that punch holes through the mid-range mulch of ‘Spirit of the Underground’ and her marriage of house rhythms with half-spoken vocals and rave synths on ‘Wolves and Lambs’ sound less like pastiche and more as though Minerva is cherry-picking the best bits of club music to fold into her own style. It works largely because tracks have space to breathe, a decision that means ‘The Beginning’ and ‘Runaway’, with their shuffling beat and stop-start boogie rhythm, are among Minerva’s best songs yet.

Minerva’s comparatively unpolished voice can lend interest to even the simplest refrains. On ‘Ivory Tower’, vocal layers are twisted into thick beds of sound, and lines like “You fooled me once / And then you fooled me twice” and “Bridges are burnt” take on a vulnerable, profound quality quite at odds with the banal lyrical content. But it doesn’t always work; in contrast, her dispassionate delivery makes lyrics about love and dancefloor romance on ‘The Beginning’ feel bland and generic. Elsewhere, lyrics take a backseat to overall effect, as on ‘Galaxy’, which pits layers of leaping vocals against thick treacly synths. The impact is tense and thrilling – and a refreshing change from the syrupy reverb overload of previous albums.

But even with a more varied palette of sounds than ever, and without much of the tape murk and reverb that clagged earlier releases, Histrionic makes for a rather dry listen. The dynamic range is narrow, and none of the beats hit hard enough to make any lasting impact. Admittedly, the low end is fuller here than on other records, but given that ‘Wolves and Lambs’ and ‘Endgame’ sound like they’re being played out of speakers covered with pillows, it still feels like Minerva’s songwriting talent is being sold short. More powerful production could make Histrionic a truly exciting album; as it stands, it’s an enjoyable bedroom curiosity rather than a high achievement.