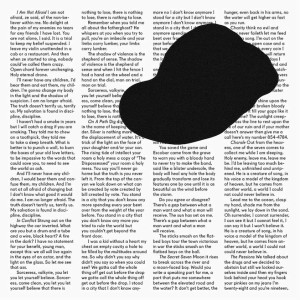 Just prior to the release of In Conflict, Owen Pallett – singer, violinist, composer, in-demand arranger, Hollywood soundtracker – wrote a number of widely-shared blog posts in which he used his formidable musical training to dissect some popular hits of the day: Daft Punk’s ‘Get Lucky’, Katy Perry’s ‘Teenage Dream’, that sort of thing.

He wasn’t just showing off. The impetus was some bullshit piece of rockist journalism in a broadsheet newspaper – you know the sort, moaning about manufactured pop hits, whatever happened to ‘real’ music, that kind of thing. But nor was Pallett coming from a straightforward poptimist position, that slightly apologetic ‘but pop music can be great too!’ Instead, he was out to demonstrate that good pop music can be both complex and innovative along formal compositional lines. Like Carl Wilson’s excellent, recently updated 33 1/3 title Let’s Talk About Love: A Journey To The End Of Taste, Pallett gets a kick out of scrutinising, testing and blurring the familiar boundaries placed around so-called high and low culture: to show both up as being largely created and artificial.

Pallett’s own solo music is what you might call art music: gleaming, fastidiously arranged neo-classical compositions, made from complex lattices of piano, violin and brass, eddying electronics and sparkling loops. His fourth solo album (the second under his given name, the first two released as Final Fantasy) gently subverts stuffy highbrow conceits. Once, his songs dwelt in fantastical lands – see his 2010 fable Heartland, or 2006’s He Poos Clouds, with its songs themed around schools of magic in Dungeons & Dragons. But In Conflict feels like Pallett in candid mood, offering glimpses of personal moments others might keep discreetly hidden. “My fingers locked behind your head/You had your pinkies on my jeans/I’m 28 and you’re 19,” he sings, over eerie, meandering keys on ‘The Passions’, the tale of a tryst gone awry. On ‘Infernal Fantasy’, meanwhile, we find him and a lover “hallucinating as we try to make each other come”. Pallett has denied that In Conflict is “more personal” record than his previous – although if it seems otherwise, perhaps that’s because these songs seem relatively free of conceptual trappings.

I say seem free, because there is a concept of sorts. In Conflict, broadly, is an album celebrating what Pallett jokingly calls “insanity”, but what you might define as human imperfection – not because imperfection is a desirable state per se, but because to be imperfect is to be human. It’s a theme explored beautifully on ‘I Am Not Afraid’, where to minimalist violins and gurgling modular synths, he brings his clear, choirboy tones to bear on childlessness and gender dysphoria (“I’m gonna change my body in the light and the shadow of suspicion… my salvation is found in discipline, discipline”). But there is a sense of fluidity here, of shifting perspectives. At its midpoint, the song suddenly morphs, and we suddenly hear something more akin to a moment of a weakness outside a bar: “I haven’t had a smoke in years/But I will catch a drag if you are smoking…”

In Conflict sounds pristine. Pallett’s compositions are filled out by the Czech FILMharmonic Orchestra and Brian Eno, who adds layered vocals throughout, as well as occasional guitar and synth. The result can be spectacular: see ‘On A Path’, a song about falling out of love with your hometown, its melancholic displacement lifted on pizzicato strings. At times, though, perhaps, it’s a little too pristine. ‘Chorale’ and ‘The Sky Behind The Flag’ feel somewhat cloistered, and the rare diversions from good taste come as splashes of viscera: the refrain of “pick up the bayonet/and run it through, run in through the stomach of your brother” that jumps out of ‘Soldiers Rock’, or ‘The Riverbed’, a stormy march that crackles with self-doubt and self-loathing. Am I the only one who longs for a little of the Pallett that froths over the pop fireworks of Katy Perry’s ‘Teenage Dream’, that goes weak at the knees for Taylor Swift? In Conflict is an impressive record of worthy content, but the day he finds a way to reconcile his musical chops to his pop ear, then Owen Pallett will surely make his masterpiece.