“I didn’t grow up in a musical family, I grew up in a drug family”: Cam’ron talks Paid in Full, A-Trak and the cult of Dipset 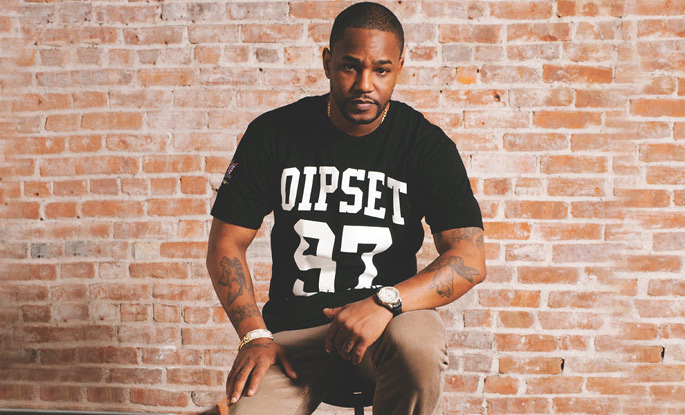 With his blistering A-Trak collaboration ‘Dipshits’ still fresh in the memory, Cam’ron will play his first UK show in a decade at London’s Forum tonight.

After an early stint in mid-’90s group Children of the Corn (also featuring Mase and Big L), Cam’ron rose through the New York hip-hop ranks, eventually signing to Roc-a-fella in 2001 and releasing two of his best solo albums, Come Home With Me and Purple Haze. It was during this period that Cam’s crew Diplomats reached their creative peak, releasing two Diplomatic Immunity albums and a slew of mixtapes and DVDs, and building a cult following that’s still strong today.

Ahead of tonight’s show, Cam’ron talks to Tom Lea about the cult of Dipset, his ear for new producers and why even though he’s in the movies, you’ll never see him playing a florist.

This is your first show in London for a while, right?

Was that when you got driven around by Westwood?

If you’re counting the Children of the Corn stuff as your first material, then we’re coming up to 20 years of Cam’ron. When you look back, how do you view the younger, mid-’90s Cam?

Viewing myself? I’m ecstatic, I think it’s a great thing. A lot of people do one song and leave, or one or two albums and leave. For me to be around this long… I mean, I did my first deal in ’97, and to be around 17 years on, that’s a great thing. A lot of people are one hit wonders, or one album wonders, or they come in and come out. To still be around, and have people interested in what I’m doing? I think that’s dope.

If you could pick one particular highlight, what would it be?

It probably wouldn’t be musically-related, it’d be doing a movie, Paid in Full. Dame Dash gave me the opportunity to do that movie, and it’s a big Harlem story, you know? Everybody in Harlem knows that story, so to be picked to play that part, I was really honoured. That’s one of the highlights of my career.

Did you always want to get into movies?

It kinda just came my way. I used to think people who did movies were suckers when I was young. I just thought it was wack and whatever, but as I got older I realised it’s really dope. And the parts that people picked me to play were pretty dope too. I get offered a lot of roles, I [often] don’t really like the offers that they want me to play – like a florist, or a gardener, or something like that – but if I like the part I’ll do it.

How did the collaboration with A-Trak come about?

I didn’t know who A-Trak was. He reached out to Dame Dash and wanted to do a song with me, and Dame told me how big he was in his world of music. And Dame was like ‘we don’t need to just do a song, we should do an EP’. Five, seven, eight, nine songs – make some money off it. And that’s how it came about, he came to my house, three different days, did eight or nine songs, and that was it. It wasn’t like a big scheduled thing.

You’ve always had this ear from producers, whether that’s Heatmakerz, or AraabMUZIK, or whoever. Which producers are you really feeling at the moment?

I still got in-house producers – my man Skitzo, Rod Rhaspy, BKREK, Instarek, ADM [Beatz], YH Zombies. A lot of the time, with beats, people wanna get a beat off so-and-so and they go off the person’s name, or their prestige, but those guys might not be as dope as they used to be. I like working with underground guys who’ve got heat.

Have you managed to boil down what it is that catches your ear about a beat, like ‘shit, I gotta work with that guy?’

It isn’t one particular sound that I like, I can work with anybody. But I think a lot of people hear the old samples in the beats and relate that to Dipset, we like samples in the music – those high-pitched samples, real soulful beats. I love them beats.

You’re playing with Skepta tonight, are you aware of him and grime?

I just got familiar with him about a month ago. One of my buddies, DukeDaGod, he travels a lot with AraabMUZIK, he put me onto him, he said he’s really dope. So I googled some of his stuff, and yeah, he’s tough.

Dipset had a real following in the UK, like it was way more influential to grime and UK rap than a lot of people realise. Were you aware of that?

Well like I said, I haven’t been here. What’s really dope now is that through social media you can appreciate the love. I was telling somebody a little while ago, that when you put something out years ago you never really knew if they liked it until you got to the show and saw people’s reaction. Now you can see where people are from, and how much love they got for you.

I think one of the reason’s Dipset resonated so much with people was that it wasn’t just a bunch of tracks – like you had the style, you had your own slang, you had the DVDs, it was this whole world that people could totally buy into. Did you always have that kind of vision for it?

Well we’re kinda the last organic group. You got all these groups where this guy’s from this part of the country, and this other guy’s from that part of the country, but we’re the last organic group. We all grew up with each other, everybody know each other mother, everybody know each other’s kids. It wasn’t planned out, it was always just like ‘yo, come to my house’ or ‘yo, let’s go to the studio together’. We were just basically living our lives, it wasn’t manufactured. What we were talking about was what people on the streets of Harlem were talking about. So we didn’t really have to go out our way to do anything, we were just being ourselves and people were receptive to that.

What crews or groups were you guys looking up to at an early age?

Like I said, we didn’t so much form a crew – we just hung out every day. No music, just hung out. Jim [Jones] didn’t rap, and I was like ‘if we gonna rap, you gonna rap’, and Juelz [Santana] was our lil guy who hustled with us and all that. If we did look up to anybody it would be Roc-a-fella, ’cause we came through under Dame Dash, he was my big homie who helped me get money when I was young, in high school, and stuff like that.

Did you grow up in a musical family?

Nah, I grew up in a drug family.

We talked about Dipset’s cult fanbase, what’s the craziest thing a fan’s ever done for you?

Strangest thing I’ve seen… well, I don’t wanna say strange, but I see a fan with a Cam’ron tattoo on one side [of her body] and a Dipset tattoo on the other. Like her whole torso, on both sides. That was strange to see. You appreciate the love, but at the same time it’s kinda Stan-ish.

Wait, was this a guy or a girl?

That was a girl. I seen a guy with a Cam’ron tattoo too, but… [shrugs]

What, your face or just your name?

Nah, my name. I was hoping it was his name. That’s a little too far.