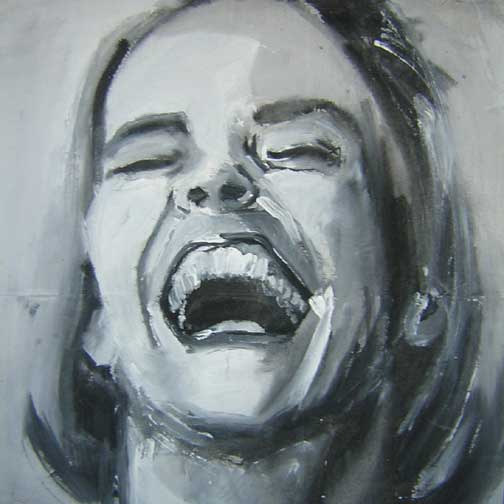 “House isn’t so much a sound as a situation,” Terre Thaemlitz says on the ‘Intro’ to Midtown 120 Blues. It’s worth quoting Thaemlitz, the transgender person behind the DJ Sprinkles alias, as fully as possible. “House is not universal. House is hyper-specific… The contexts from which the Deep House sound emerged are forgotten: sexual and gender crises, transgendered sex work, black market hormones, drug and alcohol addiction, loneliness, racism, HIV, ACT-UP, Thompkins Square Park, police brutality, queer-bashing, underpayment, unemployment and censorship – all at 120 beats per minute.”

Much is made of the sense of community dance music engenders, but Thaemlitz advances that that community made up of isolated people. In the text accompanying the release, she details a period of her own life: “Each and every day [I faced] verbal and physical harassment as queer-fag-pussy-AIDS-bait… from within my isolation I saw others isolated like myself. One of the places we met, in our self-containment, was the dance floor.” Few recent subcultural movements have been so important for minorities as early East Coast house music, and Thaemlitz’s nuanced argument makes the case for both the affinity between the individual and the music, and the formation and cultivation of relationships at the rave. As such, on Midtown 120 Blues she eschews the euphoria commonly associated with deep house in favour of the pervasive melancholy of isolation, the blues of the album’s title. It’s in the rolling minor-key piano figures, gentle groove and a plaintive, muffled vocal refrain of “sisters, I don’t know what this world is coming to” on the track of the same name. It’s in the wailing flutes, watery synths and subtle piano-and-clap groove on ‘Brenda’s $20 Dilemma’.

Thaemlitz deploys vocals largely in the form of voice-overs. Purely instrumental pieces, such as ‘Brenda’s $20 Dilemma’ or ‘House Is A Controllable Desire You Can Own’, offset the hyper-specificity of the vocal tracks with a hint of ambiguity, and the combined result is an album that’s instructive without being didactic, where the social commentary is as deeply ingrained in the music as in the verbal signifiers. As the ‘Intro’ puts it, “most Europeans still think ‘Deep House’ means shitty, high energy vocal house”, whereas on Midtown 120 Blues even the absence of vocals has political import. The outcome is an instrumental blues that aims to empathise with rather than merely appropriate its subjects’ experiences of racism, sexism and gender crises.

‘Grand Central, Pt. I (Deep Into The Bowel Of House)’ and ‘Grand Central, Pt. II (72hrs. By Rail From Missouri)’ are especially effective in that regard. The former builds into a deep groove from a keening synth figure, sharply isolated claps, and bleeps and pff-beat percussive hits. The power of the track lies not in a breakdown, but in subtle dynamic shifts and the movement of elements in the mix. Part II of ‘Grand Central’ is its counterpart, with no groove but vaporous synth contrails, a thin layer of crackle, and mournful piano figures. Even though this is a CD release, the pop and hiss of a record’s run-out groove at Part II’s close further deepens the sense of isolation.

Midtown 120 Blues is far from ecstatic or escapist in the sense of an “oasis from suffering”, but it does have a deeply soothing aspect. In a recent interview with FACT, Thaemlitz spoke of the concept of dance floors “as possible places of refuge… [that] function as safe spaces.” Melancholy is entwined with comfort, brought to a head on the album’s only explicitly euphoric track, the closing ‘The Occasional Feel-Good’. Its luscious piano groove is the most upbeat thing here, a fascinating example deep house’s dual capacity for ecstasy and malaise.

You might wonder why DJ Sprinkles might reissue an album released only five years ago. It’s testament to the fluidity of culture how different the mainstream dance music landscape looks now. EDM and the kind of “deep house” that’s crossed over into the mainstream, which Thaemlitz lambasts so thoroughly in ‘Ball’r (Madonna-Free Zone)’ as “the decontextualised, reified, corporatized, liberalized, neutralised, asexualised, re-genderized pop reflection of this dance floor’s reality”, couldn’t be further from house’s origins. In 2009, the “deep house” revival was already underway; in 2014, the mainstream has entrenched dance music as a global commodity, an artistically bereft, multi-billion dollar industry that erodes house’s hyper-specificity and whose biggest actors are – unsurprisingly – straight, white, cisgender men. Even in the leftfield underground, men whose club excursions are far removed from the origins of house currently predominate. More than ever, the underground needs a voice to reclaim dance music from the soullessness of Radio 1 playlists, deep-house-by-numbers mix CDs and superclubs, cultural entities that seem intent on whitewashing house’s rich history and recasting it as a contextless, pleasure-centred confection. Few people are able to deliver the social commentary dance music so desperately needs quite so elegantly as DJ Sprinkles.