Cathedral of Weird: Joe Muggs on the best and worst of Sónar 2014 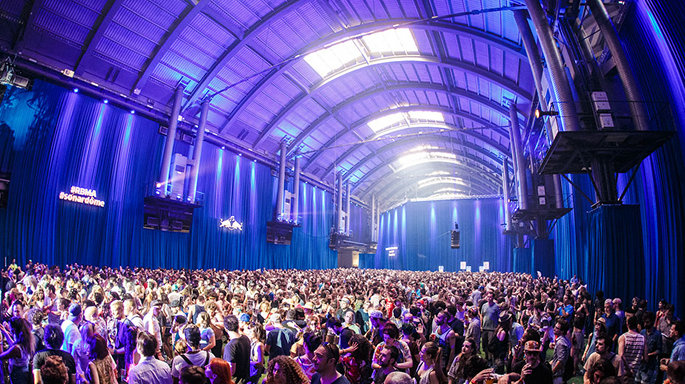 Sónar festival is full of women.

It shouldn’t even be a thing that’s worthy of comment, and it possibly sounds a bit creepy to point it out, but it is relevant: I can’t think of any comparable festival or event that I’ve been to anywhere in the world, which deals quite substantially in experimental / arthouse / noisy / electronic music but consistently has such an even gender split as Sónar.

And when you’ve grown up into music that you’re constantly being told is the preserve of inevitably male geek or academic or headbanger culture, it feels like a glorious vindication to have demonstrated that it ain’t necessarily so.

That’s not the only thing about the audience that makes Sónar great, just the most obvious. Also working in its favour is a great balance between wreck-heads and geeks – so even the most “out” music will have a reasonable contingent of people in the audience who’ve been drinking and drugging for days on end, and with weed now practically legal the whole place reeked of it, preventing chin-stroking becoming the dominant mode – and the fact that it feels like a very Spanish festival. I don’t know what the attendance figures are, but this year more than ever it felt like it was dominated by locals more than any other group, so it definitely wasn’t a UK ravers/industry busman’s holiday like some Euro festivals can be. It felt like part of Barcelona.

Sónar By Day was much bigger this year than the last time I’d been, three years ago, and on arrival I feared that the cavernous new venue had lost some of the character of the modern art gallery where it was held before. I needn’t have worried. The production values were on-point as ever, and the new space was so well used that the festival felt more joined-up, logical and easier to navigate. Off-piste parts like the exhibits of music-tech toys and gizmos, and various hacker and industry discussions, were better incorporated into the whole rather than hidden away up staircases and down museum corridors as before.

The only thing I really missed from the old venue was the beautifully dark, air conditioned basement hall of the MACBA gallery, which felt like stepping into a different world from the sunlit outdoor part of the festival. But no matter, the cavernous new SónarHall was impressively dressed up in gigantic red drapes and provided some of the best moments of the weekend.

A properly grooving set from Matmos, built up from the sounds of metronomes ticking and sellotape being ripped off the roll by Martin Schmidt as he taped himself to his chair, had a thousand-odd ravers doing without question the freakiest dancing of the weekend. And Simian Mobile Disco’s new ‘Whorl’ set was one of the best examples of how it’s still possible to something rooted equally in techno, house and cosmic disco without descending to lowest-common-denominator discoey tech-house. 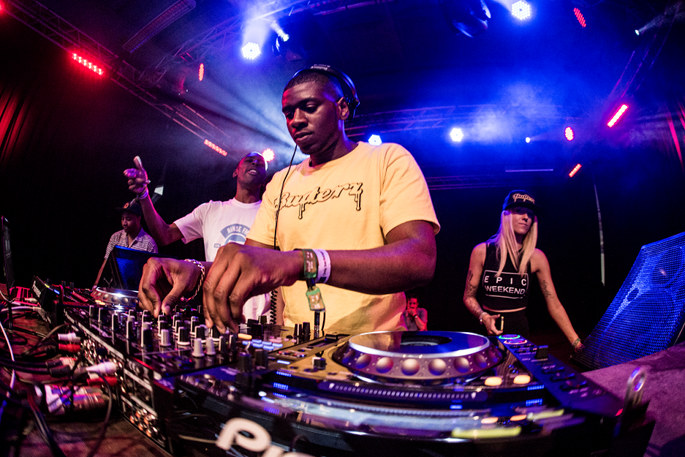 It also provided one of my favourite transitions of the weekend, after an absolutely beautiful set by Bee Mask, a true ambient gem full of swirling strings and trippy chirps which had practically the entire hall – geeks, wreck-heads and the rest – lying on their backs on the cool floor in various states of bliss. Stumbling from that directly into Red Bull Music Academy’s SónarDome area where Flava D was right in the middle of tonking out no-compromises bassline house to a thoroughly receptive crowd, I almost laughed out loud at the vertiginous difference between the two.

The RBMA area provided some of the weekend’s most direct dancefloor moments, entirely from alumni of Academies past. In no particular order, they included: TOKiMONSTA bringing hefty chunks of ODB and Missy Elliot in among her own tracks (especially when she rapped along to ‘Shimmy Shimmy Ya’); Débruit & Alsarah blending Sudanese song with wonky MPC beats and skull-crushing bass; Dengue Dengue Dengue packing the arena with locals bang into their Peruvian cumbia chug; Elijah & Skilliam dropping Jodeci; brilliantly-named Japanese producer Emufucka frazzling brains by bringing in flagrant happy hardcore riffs over his beat-head constructions; Chris & Cosey turning the whole place into a cathedral of weird; Dâm-Funk falling over on his back and making love to his keytar (although admittedly some of his longer rants and slow-jam sections did baffle the crowd, despite some faultless runs of uncut funk).

There was a thread somehow joining all this: a sense of the celebratory. This was not the internalism of minimal techno or deep dubstep, nor the blurting exhibitionist rowdiness of EDM styles, but something tied up with big chords, hefty bass and deep appreciation of the funk. That same sense followed through into the best of the nighttime activities too; for example, my one trip “off-Sónar” was to a Numbers party where we saw live sets from Redinho (starting with Zapp-clone songs then brilliantly broadening out into true 21st century funk) and SOPHIE (a whole set of really quite extraordinary sounds and beats piled up into a bit of a mess; it was fascinating to see a club full of cool young things continue dancing to something that wouldn’t be out of place next to Venetian Snares at a Planet Mu rave).

The biggest and best bits of the Sónar By Night mega aircraft hangar rave continued the thread: Nile Rodgers and Chic of course were unalloyed joy from beginning to end, organised stage invasion, copious slap-bass, sax player who looked like Max Clifford and all. Todd Terje was as good as I’ve ever seen him, extemporising funk keyboard solos and massive piano parts over everything, and ending – of course – with a massive ‘Inspector Norse’ that prompted a singalong to almost rival Glasgow’s. And Caribou – ahhh Caribou. Under a gleaming full moon, Caribou delivered a set easily as intoxicating as the first couple of times I saw the project live ten years ago. Double drummers, huge rising tides of shoegaze noise, disco grooves and an overwhelming finale of ‘Sun’ blown up to preposterous proportions that served as a reminder that stadium-sized ambition is no bad thing.

My one major numpty moment came one afternoon where I waited in the SónarHall for Ben Frost to come on, wondering at the vast size of the audience and how much anticipation there seemed to be. “Ooh”, I thought as a dramatic synth intro started and three figures came on silhouetted in smoke appeared, “this all seems a bit conventional for him.” Then some goth guitar and a steady beat came in, the whole place cheered and started dancing, and I grew even more puzzled – until I realised that I was actually in the wrong place and was watching Trentemøller. 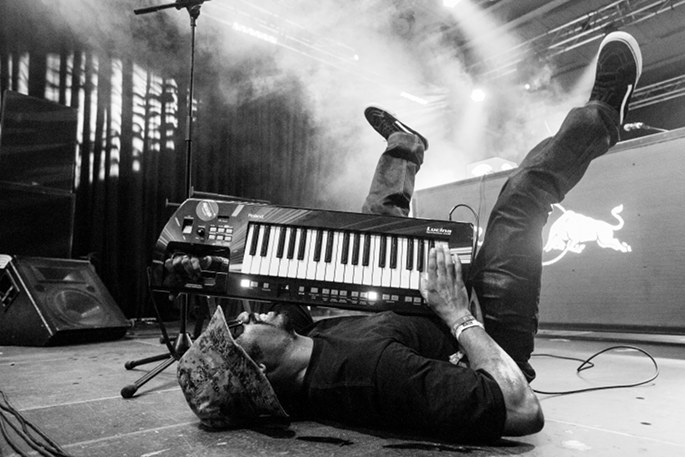 Hey ho. I jogged over the luxurious all-seated SónarComplex auditorium just in time to find Frost starting, only to wish I hadn’t. Funnily enough, it wasn’t even that different to Trentemøller – the intro and entrance of the musicians was every bit as portentous, and there were even some very similar goth guitar sounds – with the glaring difference that it was complete bollocks. I love Frost on record very much, but having his electronics dominated by two drummers deliberately playing clunky, clattery beats completely out of sync with each other on every track? Just… WHY? It didn’t evoke any kind of the natural chaos of Frost’s interview rhetoric, it just sounded like someone making a Big Statement by having two sets of bad prog rock playing at the same time. People left in droves, and eventually so did I.

The SónarComplex provided one of the finest moments of the festival too, though, in Oren Ambarchi’s set. An hour-long-piece of feedback drone, a 15-piece string ensemble, a close-mic’ed spring reverb being tickled with a brush and improvised drums: it could so easily have been the kind of up-its-arse clatter that Frost indulged in, but no. Ambarchi’s conductor played the ensemble like an instrument, coaxing the subtlest of sounds out of it; his drummer played around the abstract sounds with the sort of close listening I’ve only ever seen before from Dirty Three’s Jim White; his own sounds, though sometimes ear-splitting, rolled around the harmonic series like the music of the spheres and the whole thing sounded like a bizarre inversion of Boredoms’ drum-circle jams, their let-it-all-hang-out grooves replaced by composed precision but their sense of the infinite sill present and correct.

I snapped back to reality at the end of the hour feeling completely refreshed: the whole piece, for all its artsiness, was as celebratory and life-affirming Chic or Caribou or Flava D. And as with Bee Mask previously, even the crowd’s wreck-heads may have giggled at the beginning or end, but when the music was playing they dived into it with absolute commitment, listening with pin-drop silence. And that’s Sónar in a nutshell: there’s no division between the party and the recital, between the academy and the rave. I may have been there this year with a press pass and RBMA hospitality, but I would pay – and regularly have in the past – to be there.

I even tried and failed to be cynical. I didn’t get round to going to the special Despacio Soundsystem room that was running for six hours every day because a fellow journalist and I had talked ourselves into the idea that it would be like an old man’s folly: your uncle showing off his hi-fi equipment. I hadn’t been encouraged by reports from the London show a couple of months back that said “great tunes, but completely full of blokes.” I should have known better: this was Sónar, and of course when we finally got to it, right at the end of the final Sónar By Day, through long queues, the dark arena was packed with girls, boys, dweebs, mess-heads and all the rest, dancing to the very best disco and house on the very best soundsystem imaginable.

Chastened, we danced too, missing quite a few key acts, because this was the right thing to do – until finally they ended with the ultimate end-of-disco slowie, 10CC’s ‘I’m Not in Love’. It was as monumental as Chic, as transcendent as Oren Ambarchi – as good as festivals get.