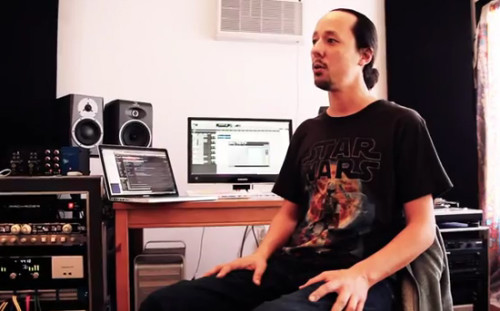 Daddy Kev is one of underground hip-hop’s most respected engineers, as well as the founder of Los Angeles’ Low End Theory clubnight.

He’s currently dishing out a stack of mastering and production advice on Twitter, which should make essential reading for budding musicians and anybody interested in the mastering process.

Here’s those tweets compiled [thanks to Martin Clark for the tip]; it’s also worth checking out this Gearslutz thread to read Kev talking about mastering Flying Lotus’s Los Angeles and more [via Brian Kedzorski].

The golden rule of audio mastering: every action affects the whole. Touching the lowest bass affects perceptions of even the extreme highs.

Mastering is ultimately about compromise: recognizing what’s possible and impossible, and prioritizing the most important frequencies.

It’s important to respect the Fletcher-Munson equal loudness contour – simply, the human ear does not have a linear response to bass energy.

Fact: The louder you listen to a song, your ears are tricking you into thinking that the song has more bass energy than it really does.

Long story short, no matter how good your monitors are, if you turn them up too loud, you will end up putting too little bass into your mix.

The human ear judges loudness by the average level, not the peak levels of the music.

By using gentler compression (high threshold, low ratio) you can let the transients through while the continuous sounds still punch.

Excessive subharmonics can drain unnecessary energy away from total loudness. Excessive sub can also cause compressors to noticeably pump.

Bass instruments sometimes sound clearer when filtered below 40 Hz. I have high-pass filter engaged on 70% of songs I master nowadays.

Update: And some more:

The most important settings on a limiter (for mastering) is attack and release.

I personally use the fastest attack, in almost all cases. In rare instances the transients might be so subtle, then a slower attack is best.

The release setting determines your destiny. I’ve noticed 1 ms gives maximum loudness but usually at a heavy cost (in distortion). Not good.