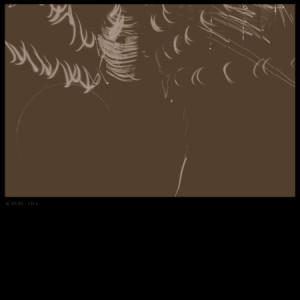 Acteurs’ output to date has felt slight – and not just in terms of length (last year’s debut was an album, but only just, clocking in at less than 35 minutes). The six synth-led numbers that made up Acteurs were taut, refined and highly theatrical, every gesture laden with sinister meaning. But in their extreme sparseness, it felt like they left many avenues unexplored. Still, this is excusable, given how busy the band’s members must be. Jeremy Lemos is an in-demand sound engineer and one half of White/Light; Brian Case is the frontman of the Kranky-signed Disappears, who recently put out their fifth LP. In their day jobs, both lean towards music of the guitar-and-drums variety – Acteurs, it seemed, was a lower-pressure outlet for exploring electronic textures.

I W I isn’t much of a step on from its predecessor. As before, its five grimly hypnotic tracks are centred around Case’s deadpan monologues. The similarities with early industrial and post-punk figureheads – particularly Ike Yard – are clear, though Case and Lemos bring an impressive poise and refinement to bear on the style. But this time around, that tendency towards extreme concision reaches even greater heights – and again, the record’s brevity (five tracks; 26 minutes) is only part of the picture.

Acteurs had at least one long-form indulgence, in the form of 11 minute closer ‘Freezing Fog’. The closest we get here is ‘Pride Of Classes’, and its creeping crescendo feels far more necessary; placed at the record’s opening, it provides a preparatory ratcheting up of tension. Elsewhere, it’s the subtlest of gestures that stand out. ‘Ewe’’s unassuming scrambled groove doesn’t do all that much to catch the ear. What does, though, is Case’s characteristically deadpan monologue, which feels like it’s slyly building to a single phrase. When that phrase appears – “yoo hoo”, echoed by a chorus of distorted voices – the effect is surprisingly camp, lending the track a pleasingly droll edge. ‘Honey Bear’, meanwhile, sounds like we’re eavesdropping on some machine-age prayer service; its delicate, swirling synth textures are so absorbing that the closing minutes’ descent into viscous noise feels almost unnecessary.

We shouldn’t forget that Acteurs are capable of more direct moments too – their debut opened with the almost-pop one-two of ‘Cloud Generating’ and ‘Lowow’. But you may not realise I W I was missing these moments until they arrive. The trudging title track isn’t bad, but the showstealer is ‘River Card’, whose nonsense title Case recites over pummeling deadweight kickdrums with absurd conviction. It feels like some equilibrium between oppression and silliness has been reached; one that, in fact, we’ve been striving for all along. Frustratingly, the thing is a scant two minutes in length. As with Acteurs before it, this record is positively begging for expansion.