Sky Ferreira: “If one more person has the nerve to tell me that I’ve fucked Terry Richardson, I will slit their fucking throat.” 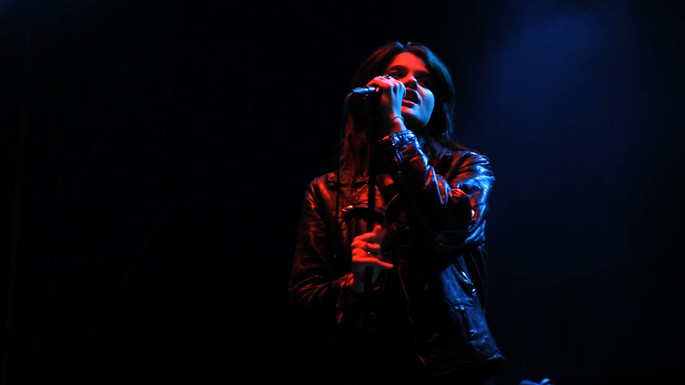 Richardson, who shoots regularly for GQ and others, has been accused of taking advantage of models on several occasions (see this Jezebel piece for a summary). Earlier this month, footage emerged of a scrapped Lady Gaga video directed by Richardson and featuring R. Kelly alongside Gaga, which, it’s alleged, promoted sexual abuse.

Sky Ferreira, as well as experiencing both the world of major label music and modelling from a young age, has been open about suffering sexual abuse as a child. In her Facebook post, she talks about working with Richardson (“Terry has been a caring friend to me for a long time”, “I have never felt uncomfortable with Terry and had 99 percent of the creative control [in shoots]”) and at the end of the post, addresses some of the issues she’s had to deal with as a model and pop singer.

As someone who has worked very closely with Terry Richardson on many many many occasions since I was 17 years old I would like to say… from my OWN personal experience: I have never been forced or manipulated into anything. I made a music video with him and I have never felt uncomfortable with Terry & had 99 percent of the creative control. This was before I was “famous”.

Allegations are one thing but completely blaming the director isn’t fair aka the Lady Gaga video. It doesn’t matter if you want to be a “role model” or not, it’s your responsibility to be AWARE of what you’re doing. When you’re making & selling pop music for 14 year olds that is just a straight up fact. I’m not against/doubting people that have said they’ve encountered things with him (it’s not my place to say so) but the media acting as if Terry Richardson manipulated Lady Gaga into making a video about getting touched by R-Kelly or whatever is a whole other thing. She is 28 year old woman & fully capable/aware of what she was doing. If she wants to do it is HER choice. Whether I agree with it or not.

I’m REALLY insulted that my work is somehow getting dragged into this mess (this is the only place I can actually write about this). Terry has only been a supportive & caring friend to me for a long time. I actually find the whole thing upsetting & have for a while. To say I support sexual abuse beyond hurts me. I’ve experienced it from a very early age until I was 16 years old & have been VERY vocal about it. I am a feminist & work with foundations globally w/ children & women that are victims of sexual abuse. I fight for it every day. To discredit me because I’m friends of someone or my music videos/photos make you feel certain way is YOUR problem. Not mine. Your opinion of someone doesn’t make them who they are I am NOT saying the women who have publicly spoken are at fault or wrong or lying. I hope they get help. I’m disgusted that people use others (victims) pain for $$$$$$$$$$$$$$$ or someway to help themselves climb the ladder of whatever they are trying to get to. The media & the fucking peanut gallery/trolls on the internet can paint any picture they want of you. They never have the full details. They can manipulate & project an image/persona that benefits them. There are lots of details that we DON’T know about it.

There are many reasons & FACTS why I support Terry Richardson that media (basically) refuses to acknowledge. If it were up to the world I would be a racist/heroin addict manufactured robot. Which I’m far from either of those things. Before you judge people off of some article you read off a newspaper or some blog just remember: They are selling you something. The story is to benefit them somehow. It’s only half truth. If that.Basically if one more person has the nerve to ask/tell me that I’ve fucked Terry Richardson, I will slit their fucking throat.People fail to mention the 8,000 men he’s also shot. I had a topless album cover. So fucking what? I don’t necessarily expect people to understand why I did it or like it. The fact that I still have to explain myself or be publicly shamed every time I speak to a journalist about it EIGHT months later is disturbing. Also, if I was using my “tits” to sell anything, my body is worth more than any cash on the entire planet. Not to mention most musicians don’t MAKE ANY money off of fucking sales. There’s a lot more damage being done to the world than the female body. Get a grip.

Read Lauren Martin’s review of Ferreira’s debut album Night Time, My Time (which ended 2013 as FACT’s #2 album of the year) and watch her go record shopping on FACT TV below.