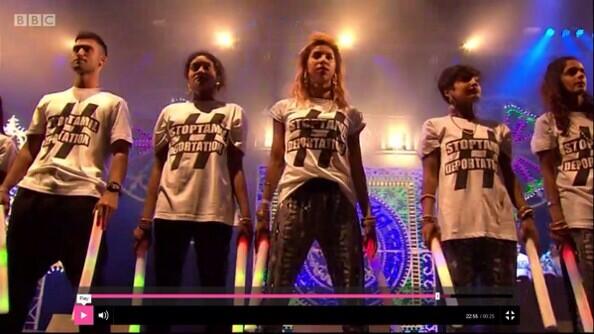 Singer claims the BBC won’t broadcast her set just as the BBC is, in fact, broadcasting her set.

M.I.A continued her bizarre approach to politics as she took to the stage at Glastonbury yesterday.

Some of her dancers and band members wore t-shirts with ‘Stop Tamil Deportation’ slogans on them, leading the singer to tweet before her appearance that the BBC – who is broadcasting the festival in the UK in more or less real time – was censoring her show due to the slogan:

BBC WONT BROADCAST MY GLASTONBURY SHOW / COZ MY T SHIRT IS TOO POLITICAL. BOOOOO

She then repeated the claim during the show:

“This is a political announcement, The BBC have banned M.I.A at Glastonbury. It’s because of these T-shirts that say ‘Stop Tamil Deportation’. But we don’t give a fuck and you know why? We are going to do the best fucking show tonight and it ain’t gonna be on TV. I’m here, you’re here and that’s all we fucking care about. Hashtag freedom motherfucker.”

All of which was clearly news to the BBC who tweeted, as did the official Glastonbury account, that her performance was in fact being broadcast – as you can tell from the image above which is a screenshot from the BBC’s own iPlayer.