Glastonbury is a rabid, filthy, depraved hypercapitalist clusterfuck – and an absolutely staggering achievement

“It’s a bit bloody big”, says a certified old geezer, sheltering under a pie-stall awning from the rain.

“I only came because my kids got me in. They know Mumford & Sons. In the days when I used to go it was only about fighting and drugs – now look at all this.” He gestures around generally at the line of stalls disappearing to the horizon and the untold thousands of people in their polythene pac-a-macs shuffling purposefully towards who knows what musical destination. There’s no judgement in his voice, not even really bemusement as such. More, it’s just a sort of stoic acknowledgement of the inevitably of passing time and the death of youth’s bright dream of a punch-up and a bag of cheap whizz.

I nod sagely – after all, while not as old as him, I am old enough to remember when Worthy Farm was more the province of murderous new age travellers and scallies on the rocks than hair extensions and spray tans (no seriously, there is a proper hairdresser and spray-tan booth on site), and I’ve not actually been for nearly 15 years, so I too am still processing a degree of culture shock. Also, nodding sagely is what you do when you’ve been on the cider for three days and are talking to a stranger at a pie stall, right?

Let’s not get nostalgic, though: Glastonbury Festival is still essentially a pit of depravity. Only now the most intense depravity is surrounded in amongst the hordes of only moderately depraved, so you might not even see it unless you’re looking. In fact, I don’t think I even saw anyone properly stack it walking through the mud, let alone passed out in a ditch as was standard in the mid-nineties. Nobody’s lined up on the bridges yelling “rocky black” and “E-Speed-Acid” on a loop, either.

But people were certainly getting stuck in. One lunchtime I notice two young lads, probably about 19, in matching suits, one purple, one green, swaying impressively as they try to get a light off someone. “That’s nothing,” says my mate. “I just went to the bogs; the one in the green had to hold the purple one up so he could piss, but even so purple lad had his head bent back looking over his shoulder. Then I had to help them both down the steps, and as purple lad walked off, pointing and thanking me, he just went ‘I am fucking slaying it right now, fam’”. So we all laugh, realising we have a new catchphrase for the next 18 hours or so.

And the further you go into the glorious badlands of Shangri La and Block 9, the more you realise that a very good proportion of the old grizzled Glastonbury vets from the DF118 and tent-burning days are still here tucked away in various corners, and having a plenty good time even if there is no public blood-letting any more. And, well, the vibe is good, and what can I do but get stuck in too (or at least as much as a 40 year old journalist with childcare duties to return to can)? 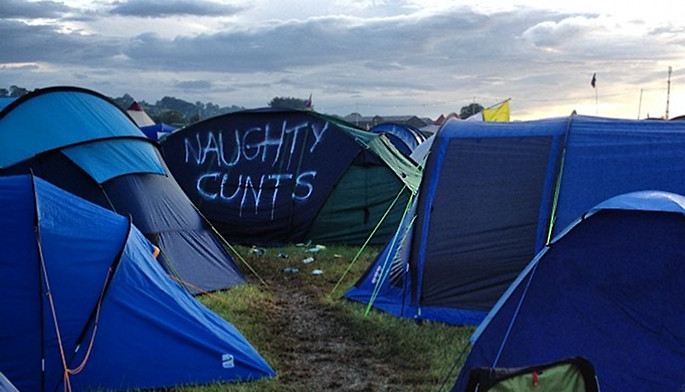 “Try and tell me ‘Gotta Get Through This’ is not an absolute tune while watching 10,000-odd people shout in joy in a beautiful hillside”

So I spend the weekend doing my very best to see as few bands and do as much hanging out as humanly possible. I hang out in the Shangri La diner listening to rockabilly, I hang out with a grizzled Devon party crew as they play acid house and Axel F to a lean-to shed full of inexplicably hot women, and I hang out under a giant flaming spider with the same Devon boys, mocking Jack Beats’s inability to work a crowd with anything more impressive than a snare rush as we wait for EZ to come on so we can hang out “doing garage elbows”.

I hang out with my friends who run the Beat Hotel, listening to their disco DJs, consuming their shockingly good pulled pork and ox hearts and drinking cocktails with a sausage in them. I hang out with Four Tet for a high-speed geek-out about the Radiophonic Workshop as we stride between fields. I hang out in the small hours laughing ’til I hurt at the phrase “acid wank”, in the morning doing the same at a local farmer telling me “fuck OXFAM and fuck their bollards,” and in the afternoon laughing even harder at a scabrous celebration of wonkiness embraced from Tourette’s Hero and Captain Hotknives. I hang out with a gay Scouser who got married to a lady “for a laugh, like”. I hang out in the Despacio tent mid afternoon as the old men play Belgian New Beat. I hang out by a ping-pong table at 5am with a burning dawn hanging over us. I hang out with old friends and with people I’ll never remember in five minutes let alone see again.

There is music, obviously. And almost all the best music I hear all weekend is old, or sounds old. I expect you could probably find something with a bit more edge if you wanted, but that’s not what it feels like Glastonbury is about, not for me anyway. It’s about instant good times, whether that means Justin Robertson playing posh trance, EZ dropping Daniel Bedingfield (try and tell me ‘Gotta Get Through This’ is not an absolute tune while watching 10,000-odd people shout in joy in a beautiful hillside when they hear it), or Joe Goddard drawing for ‘Original Nuttah’ and having 100 people on stage with him going completely spare.

I see Metallica. They are good times too for a bit, as you realise what a proper band they are and marvel at the big sound they all make together, then after about a song and a half it became clear how boring they are going to get if they keep insisting on playing all the notes and explaining all the feelings. After two and a half songs I just enjoy the lights for a bit, and after three and a half, hanging out somewhere else seems a better option. Nothing in my life has ever given me so much confirmation of the value of simplicity and passion over earnest virtuosity than the contrast between ESG – who play one of the best sets I have ever seen – and Metallica.

Mind you, the Radiophonic Workshop play all the notes too, but they do it with such palpable joy to be doing it, and in the pursuit of such an utterly sublime set that we let them off. And so do the excellently hairy neo-Balearic baggy yacht-rock band Paqua, who are, I think, the only new (to me) discovery I make all weekend. And thinking about that, slowly it becomes apparent that for all the initial culture shock seeing the size and organisational intensity of the festival, I feel right at home there; picking up a scrumpy and sinking into another damp hay bale, I feel so comfortable that any urge to seek out the new is gone.

There are plenty of other places and times for that, but Glastonbury as an institution – as a giddy, fuck-witted, nonsensical temporary city of 200,000 people – is not built on competitive cultural indulgence, it is genuinely built on hanging out. No more, no less. The fact that it’s there at all is a monument to human excessiveness, but also to our fundamental social nature, to the ties that bind. That doesn’t make it a utopia, because it’s still a rabid, filthy, depraved hypercapitalist clusterfuck. But it does make it an absolutely staggering achievement, and some of the best fun it’s possible to have anywhere in the world. Pac-a-macs, spray tan booth and all.