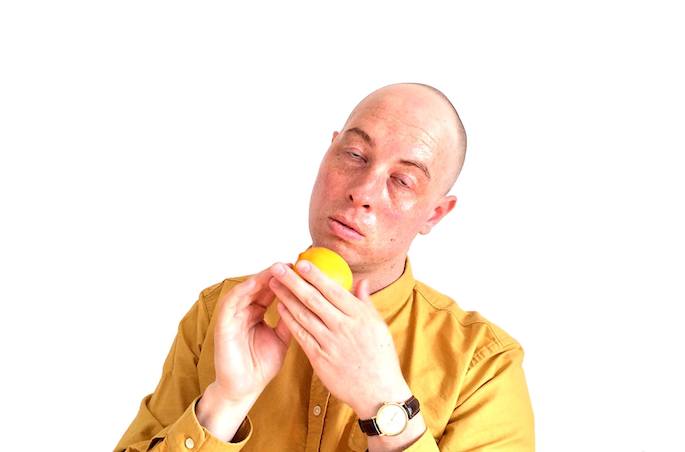 Plus, we spoke to Cameron Reed about what inspired the album.

Reed emerged as Babe Rainbow in 2010 on Warp Records with a pair of, uh, warped records: Endless Path and Shaved toyed with glitchy electronica, tweaked hip-hop beats and uneasy ambience, as did his productions for Main Attrakionz and Lil B.

There hasn’t been a new Babe Rainbow release since 2011, as Reed spent time on the road with Battles, oOoOo and as part of How To Dress Well’s band. That will change next week, when he’ll release Falling Apart, his first full-length project — and a gentler, warmer exploration of emotional electronics.

We spoke to the producer about the delay between releases, moving from “brutal anxiety to pop melancholy”, and the influence of Twin Peaks. In addition, we’re premiering the full album before its July 7 release via Kinky Beggar — stream it below.

Since the EPs, we hadn’t heard much from Babe Rainbow. What were you up to in the meantime?

In 2011, I was laid off from my job in advertising a couple months before the release of Endless Path. It was a blessing in disguise. I was able to tour the record in US, Canada and Europe, I started a company with my friends, moved from Vancouver to Toronto, joined How To Dress Well’s touring band and toured US, Canada, and Europe even more. I was producing most of the time with a pretty long gap in 2013. Eventually, I left How To Dress Well to take a job at an indie record label. Having finally settled down in the last year, it allowed me time to focus on my music again.

You’ve said that you’ve moved from “brutal anxiety” to “pop melancholy” — can you expand on that?

It’s really my own emotional movements expressed in my music across 6 years. While writing my first record Shaved in ’08, I was aimless and unemployed in my mid-20s (like many people that couldn’t find work in the wake of the recession). I believe the insecurity and uncertainly I was experiencing was reflected in the music I was writing. I felt suffocated and that came out in what I was producing.

“Between then and now, I’m happier, and I’ve become more secure, but there’s always the sense of uncertainty.”

Between then and now, I’m happier, and I’ve become more secure, but there’s always the sense of uncertainty. Change is constant and sudden. Everything is always coming together and coming apart. So though I’m happy, I also feel a sense of melancholy caused by that uncertainty. And I think that feeling is apparent on Falling Apart: it’s upbeat, but maybe a little depressing.

How did you approach the album differently than your previous work? What was your process like?

On some tracks I wanted to be purposefully minimal. Airy and spacious. I wanted to make something that seemed like it was building a falling apart at the same time. I try to force myself into a different direction every time I write. I don’t want to be saddled to a style or genre, but rather a feeling. And so in that way, it’s likely that the gentler, warmer sounds simply came from how I was feeling that day and the tones that spoke to me in that moment.

Making electronic music, it’s very easy to keep doing the same thing over and over. Either out of laziness, or because the vast possibilities in front of you are daunting. One thing my A&R at Warp suggested to me years ago was to make the music my own first and experiment with genre second. Make a house track but make it my own, make a dancehall track but a Babe Rainbow dancehall track. I did, and I think it was a way to push me to not fall into a pattern or style. It stuck with me.

There’s so much music that draws direct or indirect inspiration from Twin Peaks, including a song titled that on your album. Why do you think it has been such a lasting influence?

I originally wrote ‘Twin Peaks’ trying to use similar “sounds” from the theme song to Twin Peaks. I had the plucked bass sound and everything. It evolved from there but I think it maintained a similar vibe. It’s my ode to the grey, rainy west coast.

Where’d you get the idea to release the ‘Dub Music’ sheet music and commission the violin performance? What else could you see yourself “outsourcing”?

I had been wanting to make an a cappella version of one of my tracks because I thought it’d be funny. I had actually reached out to a couple people on YouTube. Then a friend introduced me to Fivver.com, I thought it’d be equally as funny but it really turned out kind of beautiful. Now I just really want to get all my music arranged for a chamber orchestra and recorded. I’m actually looking into it.

I hope to outsource as much of my life as I can so I cease to exist in this temporal world and can truly reach an enlightened state. I will begin by getting someone to write the rest of this interview.

Apart from music, what are you most looking forward to in 2014?

A number of my best friends are getting married this summer so I’m looking forward to celebrating with them. I’ll likely get drunk and make a bad speech, but ultimately it’s nice to be reminded of the conviction of love and the belief in permanence.