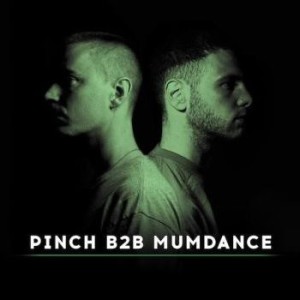 The producers behind Pinch b2b Mumdance seem well aware that they’re in the thick of something. Bristol’s Pinch describes this mix as “part of the next step” in an aesthetic lineage which includes drum’n’bass and dubstep, while London’s Mumdance likens the current moment to the “93/94 ‘Proto’ era” during which hardcore was morphing into jungle. But although Pinch b2b Mumdance is an attempt to crystallise an aesthetic, it’s not the definitive statement on that aesthetic. So far, there isn’t one; as with any burgeoning dance music movement, the sense of purpose which has been growing for the past year or more is diffuse, shared between several different loci of activity – though these loci seem increasingly interconnected as the months roll by.

As such, this mix doesn’t draw on one world, but several. There are ties to the dark UK techno of Pinch’s Cold Recordings and, through the presence of Logos, Keysound’s related but distinct ‘nuum reboot project. Mumdance’s recent single with Novelist (the B-side of which appears here) highlights his links to the Boxed grime movement, while his collaborations with Logos are close cousins of the post-Club Constructions set. A couple of tracks from Livity Sound’s extended family, meanwhile, tip a nod to another of Bristol’s techno strongholds. So while there is a unified feel to Pinch b2b Mumdance – the pair’s vision for UK music tends to be stiff and combative, all paranoid textures and bulldozing subbass – there’s also a healthy diversity to its contents.

The best moments come when this diversity is foregrounded. Early on, the bludgeoning intensity of new Pinch production ‘Obsession’ is mixed into a Shed remix of the same track; the feeling is of ever-narrowing tunnel vision, until Mumdance’s ‘The Sprawl’ barrels into frame, its shattered rhythms causing utter discombobulation. From there, the lurch back into four-four for Pinch’s ‘Down’ feels all the more rewarding. This 10-odd minute segment strikes an excellent balance between disjunct and continuity, and it’s probably the highlight of the mix.

As the stylistic purview narrows, things become less satisfying. Most of the latter half of the mix is given over to Mumdance’s collaborations with Pinch and Logos. Whilst there is plenty of meat to these tracks – unusual rhythmic configurations, stark textures, outre sonics – placing them in beatmatched sequence mostly serves to expose their weaknesses. The overall impression is of a staccato barrage of high-intensity moments, many of them bookended with a bar or two of silence (an age-old dance music trick to make the moments of non-silence seem more banging than they are). Mixed in quickfire succession (as in, say, grime), this might work. At a more leisurely technoid pace, it’s a bit like being on a rollercoaster that stops to pick up new passengers every 500 yards – unedifying, in other words.

Perhaps it’s unfair to leave things on such a negative note. After all, context aside, many of these tracks are gems (the opening and closing Logos productions, riffing on the more meditative parts of Cold Mission, are particularly exquisite). But celebrating an era of experimentation involves acknowledging that, by their nature, not all experiments are successful. Pinch b2b Mumdance suggests that a few tweaks to the formula might be in order.