A beginner’s guide to snd 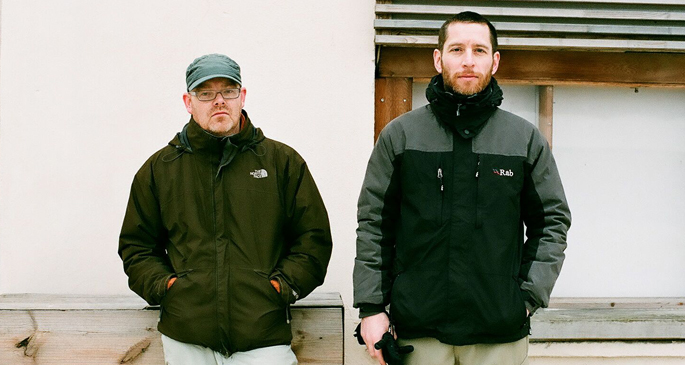 There’s minimal, and then there’s snd.

Named after a Macintosh file extension, snd were founded in Sheffield, by ex-art students Mat Steel and Mark Fell. It was August 1998, and the two quickly set about deconstructing club music that, at the time, was almost impossible to ignore. It wasn’t cynical though; Steel and Fell dragged the rhythms from garage simply because they were feeling them, and wanted to take them to their natural conclusion. They were just as intrigued by complex sound design, and their first record, 1998’s genre-bending Tplay (which is finally available again), was a softly-spoken collision of minimalist restraint, virtuoso processing and Midlands club energy.

They never expected that the sound would catch on – the 12” (and its two followups) was hugely limited, and was blessed with very little info – there was just Mat Steel’s home phone number (he didn’t have a mobile) hand-stamped on the back of the sleeve. As the scarce pressing made its way around the globe, it slowly gained traction and reached the ears of Mille Plateaux boss Achim Szepanski. Szepanski called the number, and asked Steel if he could nab a track for the label’s upcoming compilation Modulation & Transformation 4, which inadvertently positioned the duo in amongst a growing throng of experimental music heavyweights – from Alva Noto to Ryoji Ikeda.

The successful Clicks + Cuts compilations followed, and though they were typified by a certain beardy seriousness, snd were somehow able to inject the sound with the grit and grime of the British urban club scene, almost without trying. As the bespectacled eyes of the experimental electronic scene were squinting at almost everybody capable of generating a glitch in Max/MSP, Fell and Steel simply operated at their own pace, dropping album after album and avoiding the following series of fads (micro-house, click-hop, glitchy dub) without so much as a stumble.

snd have continued to work in the shadows to this day, and their records are just as crucial and, weirdly enough, just as out-of-time as they were when they first dropped. As they embark on a comprehensive reissue campaign this summer, we thought it would be a good idea to put together some of the duo’s defining moments, from the skeletal garage of their early material to the ear-bending DSP of Atavism.

It’s hard to describe exactly what it was like hearing these tracks back in the late 90s. Minimal music wasn’t out of the ordinary – Plastikman, Pan Sonic and the UR crew had primed us well – but what snd offered was even more fractured and miniscule. On the surface, it’s 2-step – distinct and no doubt informed by the pervasive sound in ’98 (the year Doolally released the defining ‘Straight From the Heart’ and Lovestation dropped ‘Teardrops’) – but listen closer and you can hear just how Steel and Fell have dissolved the sound into its crystalline base elements. It’s almost beautiful, and it’s still peerless.

By Travelog (the third of their initial trio of EPs), the Berlin influence in Steel and Fell’s sound could be heard much more distinctly. The 2-step shuffle was still present, certainly, but beneath the pinprick percussion and throbbing bass snd’s unmistakable pads resided, giving more than just a casual nod to the Basic Channel stable. 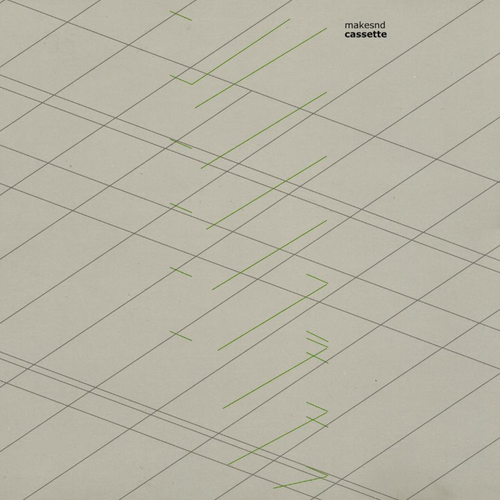 Makesnd Cassette was the duo’s first full-length statement, and explored their unhappiness with the way music was (and still is) structured. Instead of working around specific time-based changes, Steel and Fell would instead come up with a loop and allow it to play out, making only a few tweaks. This meant no developing melodic flourishes to speak of, and certainly no lofty compositional twists and turns. Instead their method highlighted minute rhythmic tics and put all the focus on what would usually be incredibly subtle elements. 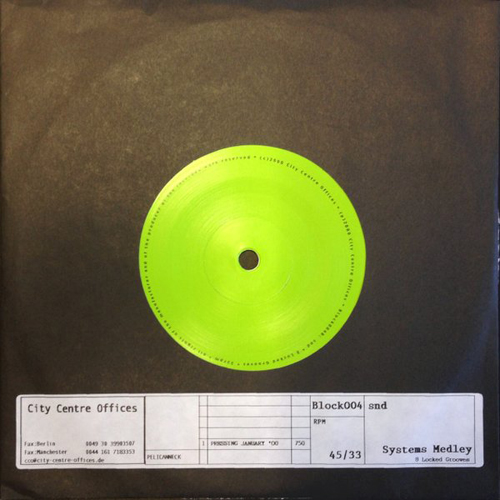 Released as part of the City Centre Offices label’s memorable 7” series, ‘Systems Medley’ is a high point in snd’s catalogue, and not just because it was backed with a generous nine locked grooves. The lead track itself concisely shows exactly what’s good about the duo, with a cool, suspended drone underpinning an uncharacteristically jaunty rhythm. This is the kind of track 7”s were made for, but good luck finding a copy now – you might have to console yourself by listening over at the terminally shady Grooveshark.

It’s hard to explain how a double CD compilation of music that sounds, to an outsider, like someone scratching on glass, managed to achieve so much notoriety and influence. Within a few years every producer with a cracked copy of Soundforge was making microsampled crackles and pops, and for whatever reason, Clicks + Cuts became the glitch ground zero. snd’s contribution was the second track on the first disc, and was a surprising foray into techno(ish) territory, inhabiting a pitch-black space not a million miles from the kind of druggy, austere 4/4 you’d expect to find haunting the shelves of Hardwax. 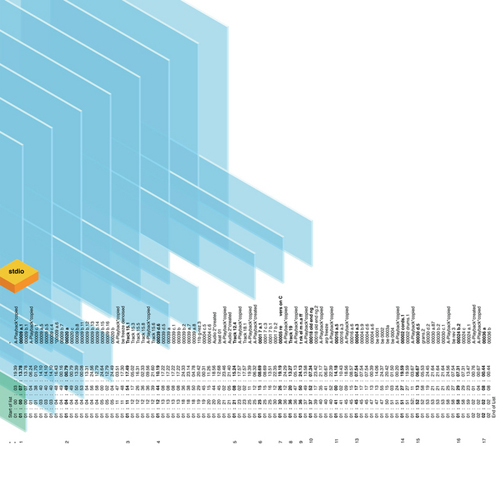 Stdio found Fell and Steel in a decidedly more confident mode, even adding what might be confused for melody, at times. The tonal elements didn’t progress at all (heaven forbid), but added a level of lounge-y oddness that only helped to accentuate the duo’s unease with the rapidly growing “glitch” obsession. It’s worth noting that if you have a vinyl copy of this, it sounds almost as good at 33 1/3 rpm.

While snd may have battled against compositional change in their productions, Tender Love marked something of an about turn for the duo when they decided to embrace it for the first time. The 2-step rhythms that made their early releases so crucial were back in full force, and arrived blessed with (gasp) actual melodies. ‘4’ (thankfully they stuck to their mercilessly blank naming convention) is maybe the album’s finest example, sounding as slippery as anything you might have found backing the silken tones of Craig David et al, and was blessed with an unashamedly glorious set of twinkling melodies.

After a long hiatus, no doubt assisted by Mille Plateaux’s bankruptcy and closure in 2004, snd returned with a trilogy of records in a move that smartly mirrored their three debut 12”s. Originally intended to be released as three separate records, they were eventually bundled as a triple-pack, and while it’s almost impossible to get hold of now, 4, 5, 6 contains some of Fell and Steel’s finest material to date. ‘PUSH 01’ sounds like a Chicago house 12” thrown into their algorithmic blender, and boasted some of the duo’s most confident sound design to date.

Moving to the Raster-Noton imprint, snd surprised many long-term listeners with Atavism, which was markedly more jagged (and in many ways progressive) than the duo’s previous compositions. They had touched on the themes on ‘08’s 4, 5, 6, but now all traces of the horizontal lounge of Stdio or the slinky nu-garage of Tender Love had disappeared entirely. ’04:29:59’ is an absolute belter, and in a better world might have broken out the dancefloors of the world. It’s still snd, certainly, but kicked up to 11.

Touching down on Bill Kouligas’ esteemed PAN imprint, Mark Fell and Mat Steel made a move back to the almost anti-melodic rhythmic explorations of the Makesnd Cassette era with ‘15/16’. Clocking in at almost 16 minutes, it’s one of the duo’s longest tracks, allowing the complex rhythmic twists and turns to inform the length and direction rather than anything that you might mistake for a “tune.”

Now, a couple of years later, the lads have reissued their debut 12″ Tplay (with the requisite suite of bonus material, of course), and have gone full circle, wrapping a neat bow around 16 years of experimentation. Here’s to the next 16.

The 10 greatest Prince albums (that are finally available to stream)

13 essential records by Joe Gibbs, the record producer who brought reggae to the punks

Reggae superheroes Sly and Robbie made 200,000 songs – these are their 16 greatest

Niney the Observer’s lucky 13: The greatest tracks of an unsung reggae hero

Get Low: The Best of Lil Jon

A beginner’s guide to Tectonic