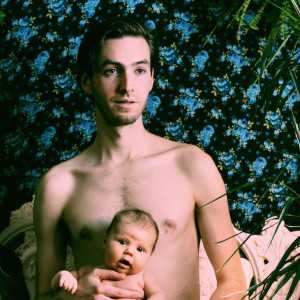 Since his debut on Flying Lotus’s Brainfeeder label in 2011, Matthew McQueen has been prolifically releasing material on cassette through his own imprint, Leaving Records. It seemed to be the ideal medium for his work: the limitations in quality and length giving some structure to his experiments with ambient and drone. Partly for this reason, McQueen’s compositions didn’t translate as well on his first album, Outmind. As the title suggests, it was something akin to an out of body experience: a flight through LA’s smoggy skyline, tuning in and out of the city’s radio channels while cruising above. An unfortunate side-effect of this hallucinatory concept was that the album seemed to wash over you, leaving you without a distinct impression of it.

Where Outmind was an interiorised and individual perspective of urban space, In My World by comparison is an album about shared experience. On the opening title track, McQueen’s crooning reverb-heavy vocals entice you to join him in his imagined utopia. ‘Cosmic Caller’, continues with this idea, transforming the conventional telephone pop song into something much weirder by playing on the spiritualist and supernatural associations to telecommunication. The track itself, with its harmonies panning between channels and sweeping synths, evoking the sense of being lost in transmission.

‘Birds in Flight’, the album’s final track, envisions an even more abstract form of communication: “we can feed of each other’s minds tonight,” promises McQueen. One of the many moments on the album that raises the question of whether In My World is a parody or pastiche; more often than not feeling closer to the latter than the former. When played for laughs, the fortune cookie mysticism of lines like “We can only dream a dream that’s dreamt from the Mind’s Eye” works. But on other tracks, like the sickly ‘Next To You’, the gnostic spoken word becomes an altogether less appealing addition. McQueen might claim “this rap is only a fraction of what I can give”, but it’s a fraction too much.

Although his beat tapes have flirted with the aesthetics and sounds of New Age in the past, McQueen’s transformation on In My World into a half-singing half-rapping New Age guru is nevertheless unexpected. Behind all the references to third eyes and meditations on the power of love, McQueen once again demonstrates his skill in building layer upon layer of mind-bending instrumentals. It’s unfortunate, then, that the album’s vocal-led tracks are also the least interesting in terms of their production. ‘Perpetual Moon Moods’ – in which Noah Lennox’s (of Animal Collective and Panda Bear) vocals filter through a dense arrangement of bass, snares and a sleazy brass motif – the only exception. Following Outmind, McQueen’s cassette releases allowed him space to experiment while checking the excesses of his full-length releases. In My World is a counterpoint to McQueen’s recent work: while the introduction of vocals reveals another side to Matthewdavid, the humour – too often overplayed – is its weakness element.