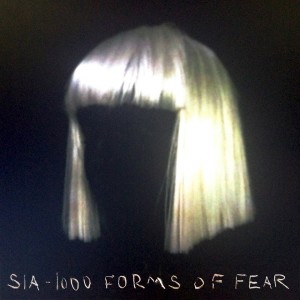 When an artist who has come to prominence writing hit songs for popstars releases their own music, it raises the inevitable question of where the difference lies between a song they would want to pass on and a song they would nourish themselves. Australian singer-songwriter Sia had already had a long career before she began penning songs like ‘Diamonds’ for Rihanna, ‘Pretty Hurts’ for Beyonce and ‘Titanium’ for David Guetta, releasing five albums that roamed from jazz to art-pop to piano ballads between 1997 and 2010. But the real intrigue with her latest, 1000 Forms of Fear, is the fact that it sounds closer than ever before to the arena-filling world of major artists she now works with – and yet, there’s a bittersweet taste to the songs she chooses to hold on to that rings through her vocal and her lyricism in a way no one else quite matches.

‘Elastic Heart’, the stand-out anthem on this record, is a particularly great example of how only Sia can truly rock a song written for (rather than by) Sia – The Weeknd was upsettingly allowed to ruin it when he appeared on the initially released version on the Hunger Games: Catching Fire soundtrack late last year. It’s not only that his “ooh baby”’s sound too clean-shaven alongside her gravelly howl, but that when placed next to a vocalist like Sia, it becomes apparent just how much of what he does is about performance and character – and in turn, it becomes apparent how intensely Sia lives through her music. In the version of ‘Elastic Heart’ that appears on 1000 Forms of Fear, where Tesfaye is nowhere to be found, Sia provides the emotional crux of the whole album as she sings the lines he flumped: “I walked through fire to save my life,/And I want it, I want my life so bad.” In the middle of a pop song that bounces like rubber, she sings – near-screams – about the overwhelming strength she needed to convince herself that life was worth living after coming out of a crushing relationship, and every word is felt.

It’s an old formula – tragicomic pop music that attempts to dance away the pain – but it’s one that Sia carries off to perfection. Lead single ‘Chandelier’ is intercut with the childsplay refrain of “one two three, one two three, drink”, and a verse that drawls “sun comes up, I’m a mess / Here comes the shame, here comes the shame” – lyrics that provide the depressing morning-after flip-side to the shallow Live For Tonight™ attitude artists like Guetta churn out for the club. On ‘Elastic Heart’, she provides what is ostensibly a straight-up feel-good anthem about how good it feels to come back fighting and loving yourself after a bad break-up. And yet, where the likes of Ariana Grande and Ciara keep things firmly either firmly focused on a positive future or a present moment of rose-tinted confidence in the club, Sia lets the past fracture through. “Let’s be clear, I trust no one,” she declares, unafraid to show that her new strength wasn’t earned without scars.

Another striking difference between the pop songs Sia gives away and the ones she keeps for herself is a violent overtone. It’s an unflinching approach that harks back to ‘Breathe Me’, the ballad about addiction and self-harm that launched her to global attention when it was used in the finale of Six Feet Under back in 2005. But where that song was a soul wallowing in plain sight, 1000 Forms of Fear wraps up physically threatening imagery in drum fills that hit like collisions and choruses that swell with the force of a Top 10 hit. Their impact is somehow harder and cushioned: “Kill me like an animal…hit me like a baseball” she demands on an unlikely power pop chorus for Free The Animal, before her voice is brutally chopped and stretched out into an inhuman glitch. On Fire Meet Gasoline and Straight For The Knife, the titles tell you all you need to know about her grim metaphors for the ways lovers can impact and harm one another.

The thematic tightness is matched by a smoothness in sound that Sia hasn’t gone for before. While her voice is as much a living thing as it’s ever been – there are squeaks, yells, sighs, screams and an unfathomably powerful high register – the production is clean, sounding closer to the usual music that her longtime collaborator and co-producer Greg Kurstin usually works on with Katy Perry and Lily Allen. This makes for a listen that can be a little tough to swallow whole. Chorus after chorus, bridge after bridge, Sia pulls back and punches with the same lyrical bite centred around an off-key metaphor and the same stadium pop formula.

But whether or not stadium pop is to everyone’s taste, this is it in its smartest and most human form. Alongside the violence, there are touches of quiet anxiety in lines like “I come home / on my own / check my phone / nothing, though” and the admission mid-chorus on ‘Chandelier’ that although she’s flying high, she “won’t look down, won’t open my eyes.” On any other popstar’s album, the closing moments of ‘Eye of the Needle’ – Sia wailing alone at a piano –  would read like a grab for authenticity, a glimpse of the “real” artist. But the genius of Sia is that, stadium-filler or no, she’s herself through and through on every single track.