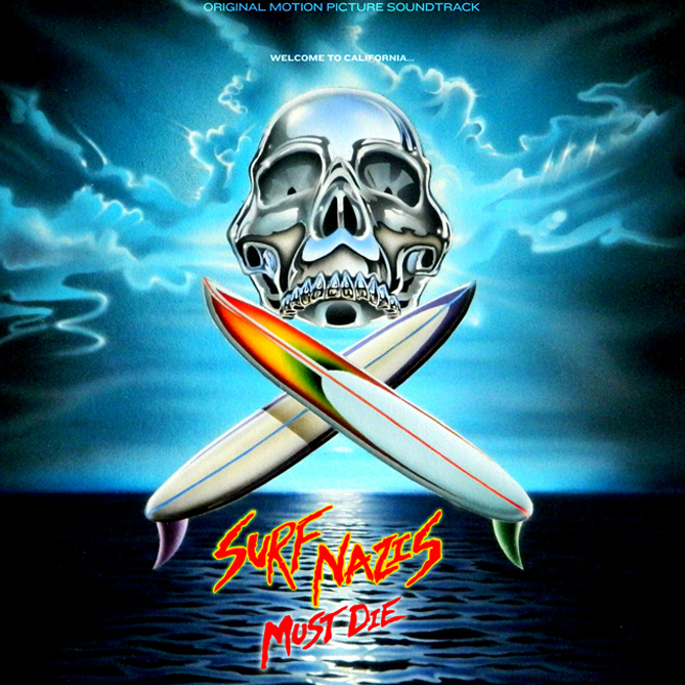 If you know much about Troma, you’ve probably come across the notorious Surf Nazis Must Die.

The title alone was enough for schlock fans to go rifling through VHS bins in search of a rare ex-rental copy of this 1987 gem, and understandably it’s gone down in history as one of the b-movie world’s oddest movies. The film really does exactly what you’d hope – set in a post-apocalyptic future, neo-nazi surfer punks are running riot, and of course, a gun-toting grandma seeks to wipe them out after they kill her beloved grandson. Seriously.

Even if you’re not into this kind of thing (but we don’t believe that for a second), Jon McCallum’s synth-laced score is a thing of beauty, and thanks to the fledgling Strange Disc imprint, it looks like we’ll be seeing its first proper vinyl release. Packaged in a deluxe gatefold sleeve (you can peep the awesome artwork above) and bundled with a set of enlightening liner notes from McCallum himself and director Peter George, it’s a low budget horror nerd’s dream – we shouldn’t even need to mention that some lucky buyers will clap their hands around a randomly-inserted “blood in the water” colored vinyl disc, should we?

Pre-orders for the record are kicking off tomorrow on the Strange Disc site, and the record is expected to be released on September 2. Take a look at the clip below for an example of just what you’ll be getting. [via JoBlo]