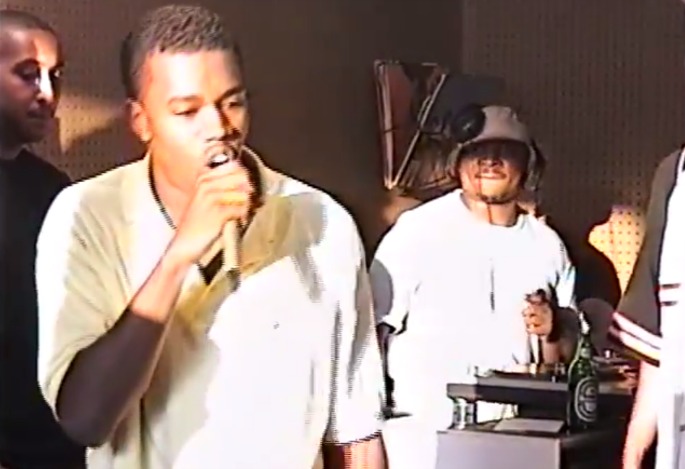 Once upon a time, a 19-year-old Kanye West journeyed to New York City for the opening of the Fat Beats record store on 6th Avenue, hub of the city’s underground hip-hop scene. Former store manager DJ Eclipse recently unearthed some footage from the day and shared this clip of the future Yeezus delivering a tight verse.

Eclipse told Complex he was surprised to discover the then-unknown Kanye among regulars like iLL BILL, Lord Finesse and Xzibit:

“The original location of Fat Beats launched on July 14, 1994 which means FB just turned 20 years old! Business was doing so well 2 years in that Joseph Abajian decided to move the store from it’s small 9th St. basement space into a 2nd floor location on 6th Avenue. August 1996 (day?) was the grand opening of the 406 6th Avenue location. It was also the beginnings of our independent movement which had recently started bubbling about a year before.

Yesterday I started converting old Hi8 video tapes to DVD and came across some interesting footage from that day. Now we had a lot of the usual suspects in the place that day such as ILL BILL, Arsonists, Lord Finesse, Adagio, Breeze Brewin, A.L. Skills, Percee P, J-Live, Mr. Live, Chino XL, Al Tariq, Black Attack, Xzibit, Shabaam Sahdeeq, Rawcotiks, Ak Skills, Rob Swift, Roc Raida, DJ Spinna and many, many more. But what took me by surprise was the appearance of this 19-year-old kid who at that time nobody knew. At least in NYC.”

Kanye’s verse includes a reference to Alanis Morrissette and the very Yeezy-esque line, “It ain’t original because I stole it from the future.” Watch it below.