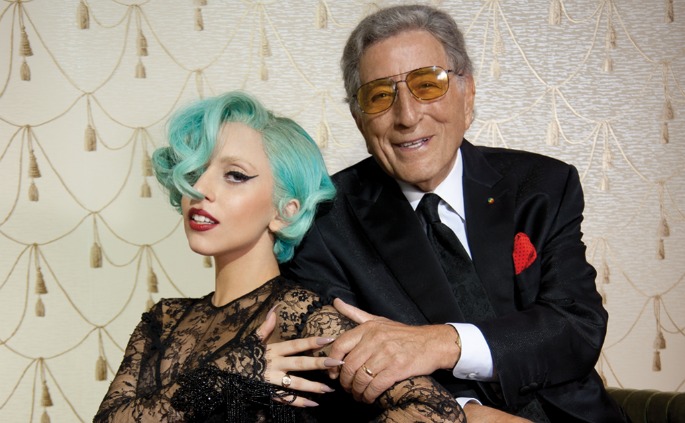 The ARTPOP diva apparently got a tattoo of a trumpet to celebrate.

They’ve been working on it for the past couple of years, but Lady Gaga and Tony Bennett’s album of jazz standards is finally set for release this autumn. While their version of ‘The Lady Is A Tramp’ from his Duets II album has been floating about since 2011, a song from the Cheek To Cheek sessions has now surfaced – a version of Cole Porter’s ‘Anything Goes’.

As is alway the case with these side projects, Gaga says jazz is her first love and she’s been singing it since she was 13 years old, yadda yadda. As you can hear, her jazz voice is totally different to the rawk-inflected stadium-pop voice of her usual stuff.

“She phrases like I phrase,” Bennett told Rolling Stone. “She’s a wonderful singer. Everybody knows and loves her very much. I think when they hear this album that we’re doing, they’re going to say, ‘We had no idea that she sings that well.'”

Listen to ‘Anything Goes’, which is on sale via iTunes today. Meanwhile, Gaga’s former assistant has just signed a deal to publish a tell-all book about her time with the singer.