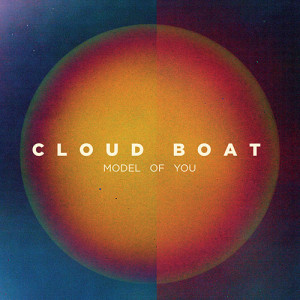 Cloud Boat’s beards aren’t the only things that have grown. The newly acquired facial hair might be the first thing that leaps out of the Blue Steel press shot that accompanies the group’s second album, but what’s really disarming about it is that unwavering stare of sincerity. By now it’s a pretty common trajectory: melancholy electronic artists post a few tracks online with no image of their faces, eventually follow these up with a release that shows them partially obscured by fog, shrubbery or some other form of distortion, before dramatically “stepping out of the shadows” to mark a turning point in their maturity as artists.

Like How To Dress Well before them, Cloud Boat are in tune with the anonymity-shirking (as well as beard-growing) mood of 2014, keen to make eye contact in their new glitzy portrait. And like How to Dress Well’s What Is This Heart?, Model Of You has outgrown the bedroom in sound as well as looks. This glossy fine-tuning is presumably due to the recruitment of Andy Savours, producer to The Horrors and My Bloody Valentine, whose presence weaves its way through a much more cohesive statement than Cloud Boat’s patchwork 2013 debut Book Of Hours.

That first LP collected snippets from the thrash metal of Cloud Boat’s youth, the folk songwriters they admire and obvious post-dubstep influences from the pair’s time as session musicians for James Blake and Mount Kimbie. Live, this translated into a mellow performance that revolved around an illuminated full moon, both members seated while one got into some serious headbanging and the other tapped into a vocal register that soared elegiacally. Hands went in the air for the gravelly surge of ‘Amber Road,’ while mournful, vocal-focussed tracks like ‘Youthern’ had the room captivated in silence. It made for a set that was thrilling in its shapeshifting, contrasting elements, like watching driftwood emerge from the tide and never quite knowing what would come up next. It was, also like driftwood, pretty aimless.

If Book of Hours was driftwood, Model Of You is more like a pebble, slowly sifted into shape on the beach under gradual pressure of the waves. Lead single ‘Carmine’ signalled an album more focused on guitars and traditional verse-chorus structures, blending electronics into the overall shimmer. Clarke’s vocal delivery has shifted gears dramatically, seeking less to jolt and disturb with pitch-shifted ad libs and instead sitting on a more-or-less even keel for the whole album. On the heartbreaking centrepiece ‘Bricks Are For,’ his voice barely moves above a low, listless tone as the music swells overpoweringly into view, while ‘Portraits of Eyes’ builds to an insistent chorus via verses that are practically mumbled. Everything flows with the easy certainty of a story being told, rather than scraps being stuck into pages.

If anything, you might say it’s too easy. There’s definitely a sense of something having been lost here: there was an unpredictability to Cloud Boat on their debut that has softened into something so comfortable that it may have gone too far in the other direction. Like Clarke’s vocal, the guitars rest evenly on repeated motifs and minimalist progressions, while the speed oscillates between slow and a mid-tempo shuffle with the constancy of the tide. When the duo do bring in big moments, they often feel cheesy in its contrast to the understated elegance of what surrounds sounds them, such as on the album’s self-consciously anthemic second single ‘Hideaway’. There are, however, moments where Cloud Boat manage to take a left turn without derailing the track, such as the second half of ‘Hallow’, which piles increasing heaps of anger on the crucial line “I’ll build a model of you.”

The album’s flaws shouldn’t take away from the fact Cloud Boat have chosen to do something pretty brave. Previously riding on post-dubstep’s coattails, they meandered their way through an album that was fun but made no real statement; this is their attempt at drawing a line in the sand, marking out their territory and telling a story within in. On ‘Bricks Are For,’ Clarke sings about the barriers erected inside “broken hearts”, when a person feels long gone from a relationship or a situation before they’ve physically left. That kind of subtlety of emotion is conveyed with a new subtlety in sound, and that’s where Cloud Boat have truly grown – there’s no pandering to musical tastes, no whimsical experimentation, but instead real unity between a song’s musicality and meaning.