Lists I By Paul Nickerson and Francis EnglehardtI 06.08.14

The Month in House and Techno: August 2014 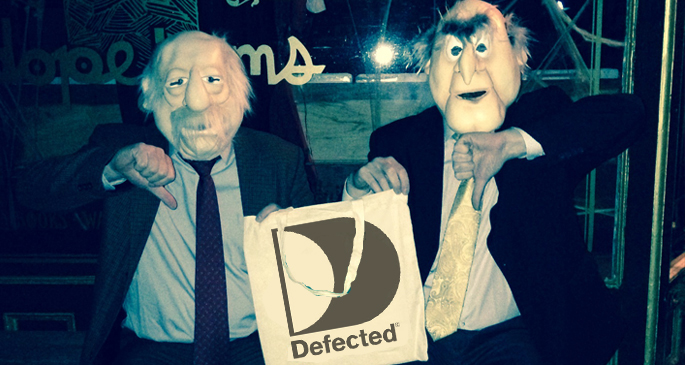 Slow to Speak, the duo behind New York record store Dope Jams, have taken over FACT’s house and techno column.

For almost a decade now, Francis Englehardt and Paul Nickerson have run dance music’s most iconoclastic record store, and are as enthusiastic and enlightening with their recommendations as they are ruthless with their takedowns – just ask any of the high-profile DJs who’ve found themselves in their line of fire.

Every month Slow to Speak will be rounding up the best new 12″s around – or at least, that’s the plan. In case you haven’t noticed, these dudes march to the beat of their own drum – so this column has records from 2014, 2013 and 2012. It also has an old Legowelt track, because Legowelt is great and deserves to feature whether he’s released a new record that month or not.

They’ve also included a free mix, celebrating eight years of Dope Jams. You can stream it below, and check out Slow to Speak’s picks of the month over the next 13 pages. Slow to Speak will also be taking over London’s Dance Tunnel on September 6 – for tickets and info, head here.

These days, records that spark the imagination are few and far between. This record actually reaches forward into the unknown. Thankfully, I haven’t yet run into any articles on Voiron — no ridiculous pictures of an pensive mid-20’s white male looking up to the clouds. If that’s the case, I don’t want to see it. This record makes me feel like it’s 5am, the sun is finally working it’s way up and we’ve somehow survived another great party. That’s the only image I want in my head when I listen to this record. For fans of that other music site, beware: this record has a change in it.

The Knife – ‘Pass This On’ (Shaken-Up Version)
(Brille)

In the past few years, The Knife/Fever Ray have won over that place in my heart that once unequivocally belonged to Bjork. A contemporary artist that still excites me! I wasn’t really a big fan of the Knife until the Fever Ray album, so I never heard the original of this song till just recently. It’s amazing what a few years can do to a song. They manage to capture this child-like, free and playful energy that really isn’t present at all in the original. I think the tempo change is exactly what this song needed. They also managed to make me fall in love with steel drums. Hopefully this will see a vinyl pressing soon!

Alex Banks – ‘All You Could Do’ (Alternate Version)
(Monkeytown)

Listening to this song makes your brain and your body pull in two totally different directions. It’s like a roller coaster ride – it starts with it’s slow grind up, click by click of the chain as you rise to the top. Sitting and waiting to fall off the other side, and just as you get to the top, it leaves you there waiting for the free fall…

Like fog horns rolling across the bay at dusk — a warning of what’s to come as night falls. With the sadness of a Burial record and the production sense of a man with a broken view of what lies ahead, this is techno worth owning.

Without getting too wordy, this record describes a world where most people on this planet are not happy with themselves. Where if they could, they would happily go under the knife to mould themselves into whatever fucked up image they have of themselves. Plastic surgery is our fast food answer to self-esteem. It’s incredibly sad and frightening what people continue to do to themselves in pursuit of the fountain of youth. Music that is relevant to our times. Music that actually says something straightforward and isn’t marred by silly post-modern intellectual drivel. Interesting concept.

We got this record in the winter of 2013, so technically it’s still pretty new. Hieroglyphic Being a.k.a. the Swamp Thing of Techno delivers yet again on this absolutely fucking beautiful track. Like the Swamp Thing, most of his tracks are covered in mud, moss and whatever else lives at the bottom of the swamp, and occasionally these elements assemble for the perfect disaster. The beat on this track swings without attention to the keys for the first two minutes but once the two meet it is Heaven!

In between trying to figure out what a Seth Troxler is and questioning why it’s impossible to find good Mexican food in the Kaatskills, I often find myself pondering why every fucking record that comes out now has an unnecessarily long breakdown in exactly the wrong place. This record is a great example of that. It could be a dope track to play as the party is building momentum, similar to Loading Video…

;gt;” target=”_blank”>2AMFM ‘Desolate Cities’, but right when the intensity is building and people are starting to get into it, here comes this totally not-so-epic breakdown.

There is no need for a breakdown a minute and a half into the track, it makes no sense — it’s as if it reported for work at 9:00 and is already punching out for a cigarette break at 9:05. Its why producers like Masters At Work were so great… because they were actually DJs! They had an understanding of what worked on the floor and and employed the basic do’s and don’ts to keep your body moving. All these European kids spend all this time trying to mimic classic house sounds but fail to pay any attention to the basic structure, which is what really made those records they are copying so great.

Grapeface – ‘How Sweet Life Would Be’
(Slow To Speak)

This is from the forthcoming Grapeface LP, Lucky 13, which we are releasing on Slow To Speak. Grapeface is a born and bred Brooklyn producer/security guard/reseller of not-so-rare-at-all VHS tapes, who currently resides in the Marcy Projects. When he isn’t driving Randy Delgado crazy, you can find him sketching out some of the most hauntingly beautiful shit we’ve heard in a long time.

Fanatical about ’70s classic rock and crappy horror movies, Grapeface is a few apples short of a bushel, for sure. This bizarre brew of influences and surroundings has allowed for Lucky 13 to fall limbs beyond the slew of recent LPs rooted in instrumental hip-hop. ‘How Sweet Life Would Be’ is one of my favorite tracks off the album, the soaring twisted vocal sample sums up that aching, deep-seeded longing for everything to just get better for the summer in NYC, and the equally urgent need to find that special person to escape that hell of reality with… both of which are admirable dreams he will never realize until he shaves off that fucking mustache!

This is the best record I have heard in a long time. The whole album is good, actually — not great, but definitely worth passing up those Moods & Grooves ‘Classics’ 12” compilations for! ‘Initiate’ sounds refreshingly current, a vocal that actually has some changes — so Banks has two strikes against him right there! It reminds me of when LTJ Bukem released his album Journey Inwards and hidden on the bonus 12” was the house track ‘Feel What You Feel’. It felt so contemporary at the time and had a very similar mood. Given this is 15 years after Bukem’s album came out, “Initiate” is much more epic, drowning in strings, white noise and vocal refrains, but the mood remains. What I would give to find a record this good every month!

Kings Of Tomorrow – ‘Fall For You’
(Defected)

Yeah I know this record isn’t new, and if anyone had made a good soulful vocal in the last 12 months it wouldn’t be on here. This is classic summer jam material: lazy drums, warm keys and hopeful lyrics of a love to come. It was never released on vinyl, of course. A brilliant A&R move by the fine purveyors of corporate house over at Defected. Maybe you guys could devote a little less money to Shovell’s cowry shell and warpaint budget, and get this thing out on wax by the end of August!

I remember when Tom first got infected with STD – it was a cold and rainy Brooklyn day, and while it was really kind of a downer vibe, it also proved to be a very liberating circumstance for him. This release is the second STD he got, he flew back to his hometown in England and really let loose — two months later and he copped another one. He was prescribed some pretty potent meds which really slowed things down for him, the song ‘Be Me’ played at 33RPM is the audio documentation of fours hours after taking those first pills. Don’t be a fool, vulcanize your tool.

This one is a couple of years old, too, but still great. It reminds of what it would sound like if Tony Humphries climbed into a German man’s body and remade Cultural Vibe’s ‘Ma Foom Bey’ in 2012. While this may not produce a very inviting visual, it definitely creates a dope and extremely interesting track.

LEGOWELT PICK OF THE MONTH!

Clendon Toblerone – ‘It Is Within’
(COS_MOS)

We figured someone as prolific as Danny Wolfers deserved at least one pick a month! So, each month will be a recommended Legowelt track. This month we encounter him as Clendon Toblerone, the erratic heir to the Swiss chocolate company. On this M>O>S sublabel, he drops the not quite finished ‘It Is Within’, a driving party rocker with a dope vocal sample that feels just a little too sparse. It is rumoured that Toblerone is a classically trained bassoonist though, so the uninteresting repetitiveness of the electronic music thing just may not hold his interest. Till next month….

“Just plain wrong in the best way possible”: Slow To Speak’s month in house and techno

“Fuck just the TIP, slam the whole fucking thing in!”: Slow To Speak’s month in house and techno

“Who would believe that Moby could still make a dope record?”: Slow To Speak’s month in house and techno