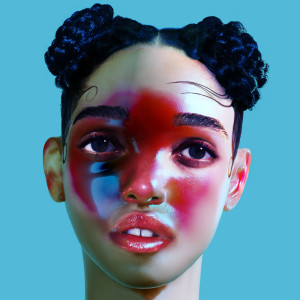 There’s a moment in Fader’s cover feature on FKA twigs where, scrutinising an image of the singer from a forthcoming photoshoot, her stylist Karen Clarkson remarks, “I don’t think anyone’s looked like that before, have they?”. twigs’ pop project to date has been all about new configurations. Not only of image – though her look, both in magazines and onstage, is frequently surprising. Her music videos, too, explore new ways in which a female pop star might present herself (think the gender-confused onanism of ‘Hide’). And, of course, her music is pop deconstructed, trading in jarring silences, distended grooves, odd contortions of voice and instrument. It’s hard to think of an emergent pop artist who sounds quite so fresh.

When I first listened to twigs’ debut album, and particularly its lead single, I was disappointed. The video for ‘Two Weeks’, for all its surreality, tips an unmistakable nod to Aaliyah in Queen of the Damned. The track itself, co-produced by Lana Del Rey collaborator Emile Haynie, is emotionally gripping, but musically rather staid. Alongside Haynie, LP1 also features input from Paul Epworth (famed for his work with mid-‘00s indie bands like Bloc Party, as well as with Adele). The home-team is present too – Arca, Sampha – but it’s these star names, often delivering more conventionally “big” arrangements, that at first seem to dominate.

The title of ‘Pendulum’, co-produced by Epworth, is sadly appropriate: it lurches unconvincingly between a wispy verse and a bombastic chorus. The Haynie-produced ‘Video Girl’ deals with twigs’ experiences of being recognised from her past life as a dancer in pop videos; while the lyrics drip with celebrity angst (“the camera’s on you, ain’t that enough?”), the sluggish arrangement hardly carries the sentiment. Another Haynie production, ‘Give Up’, hinges on the clumsy refrain, “I know that sometimes you wish I’d go away”.

“Why are these tracks here,” I found myself thinking after giving the record a few proverbial spins, “when elsewhere twigs proves that she can be so much stranger?” Like in brief but hypertrophied opener ‘Preface’. Or ‘Hours’, whose heavy-lidded chords, paired with the refrain “I could kiss you for hours”, make for an expression of carnal fulfilment perfectly suited to the singer’s pillowtalk whisper. Or ‘Closer’, in which twigs communes with Enya, her cut-glass delivery lost in a cathedral’s worth of reverb.

But the more I listened, letting the tracks fizz and settle like the sediment in a glass of Alka-Seltzer, the less these flaws seemed to matter. LP1 is far from perfect, but its consistency of tone, its thematic rigour and its commitment to developing a musical grammar all of its own serve to override these momentary weaknesses. The binding agent in all of this is desire. twigs’ erotic pronouncements are often bracingly direct and expressed with utter conviction (‘Two Weeks’ peaks at “my thighs are apart for when you’re ready to breathe in”). But though almost every song seems to revolve around some combination of need and lack, you never get the sense that twigs is a passive actor in her romantic situations.