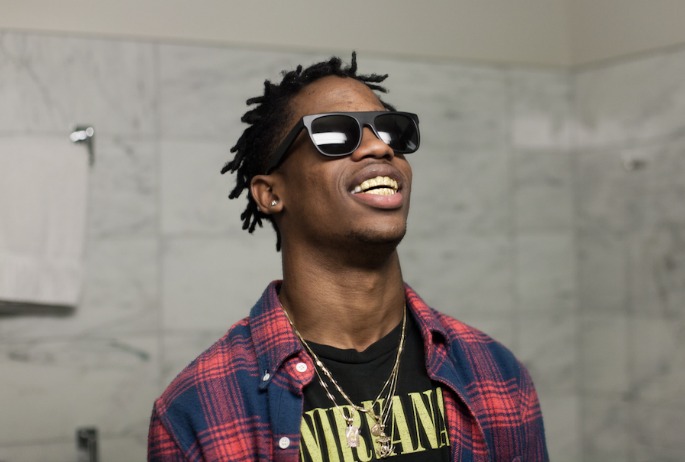 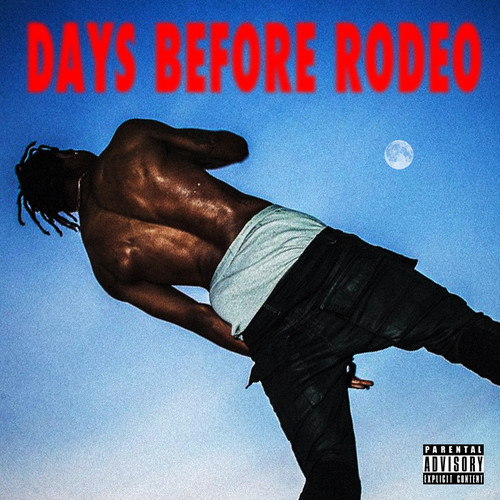 Mixtape of the week:
TRAVI$ SCOTT
DAYS BEFORE RODEO

It’s hard to deny young Houston rapper/producer’s innovative skill behind the boards. His contributions to Kanye West’s genre-busting Yeezus were invaluable, but on the mic he’s always been a less reliable presence. His debut tape Owl Pharaoh was as cocky as it was patchy, and all too often he struggled to wrench himself from the massive shadow of his mentor. This time around however, things are noticeably different.

The interesting production tics that helped Scott elevate ‘New Slaves’ and Jay-Z’s ‘Crown’ are on full show here as he tramps through genres like a redneck in a monster truck. He has an alarming lack of self-awareness, and that’s refreshing and rare – when he layers cheesy soft rock guitar licks over ‘Drugs You Should Try It’, what in other hands would be an awkward collision of styles sounds easy and effortless. He’s a weird kid, and it sounds like in accepting that, his persona has moved forward in leaps and bounds – his rapping is not only more confident but it’s less reliant on mimicry. He’s started to sound like Travi$ Scott, and that was a rapper we hadn’t really heard before.

Just make your way over to ‘Skyfall’, his bizarre collaboration with Atlanta superstar Young Thug. Pronunciation of conscience aside (c’mon), Scott managed to give Thug a run for his money – something that’d be tough for the most weathered spitter – and his syrup-laced production (could we call this post-Yeezus yet?) echoes the duo’s sing-song meanderings perfectly. In 2014 rap appears to be getting odder and odder, and we don’t mind one bit. 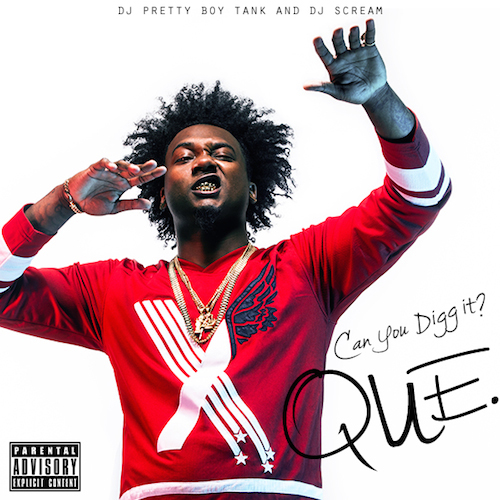 QUE
CAN YOU DIGG IT?

Que emerged from obscurity earlier this year thanks to one particular club smash – the ubiquitous ‘O.G. Bobby Johnson’ – which unless you’ve been wearing noise canceling earphones all year you’ve probably managed to absorb on multiple occasions. Since then he’s been dipping in and out of the spotlight, last month’s ¿Que Fresco! collaboration with Mike Fresh being the hands-down highlight, while the world waits eagerly for a more definitive solo statement. Sadly, Can You Digg It? isn’t that statement.

For starters, it’s not all new material – ¿Que Fresco! highlight ‘Fuck Around’ is featured yet again, as is Who is Que? cut ‘Too Much’. It wouldn’t usually be a serious problem, but these are the record’s best tracks, and too much of the fresh material feels either unmemorable or unfinished. ‘All Y’all’ is a weak take on Rocko’s 2013 hit ‘UOENO’, DJ Mustard-produced ‘Rich Nigga Problems’ is a poor man’s ‘I’m Different’ (and inexplicably even sports a guest verse from 2 Chainz) and August Alsina starrer ‘Diamonds’ sports three producers (including Drake-collaborator Boi-1da) but totally lacks direction.

It’s not all bad news, there are still flickers of Que’s undeniable charisma – ‘Uno Dos Tres’ re-kindles up the mood we’ve come to expect from the Atlanta rapper (even if it is mixed quieter than the rest of the album), and the accurately-titled ‘Standout’ – which features a well-used Ty Dolla $ign on the hook – is good enough to make the tape worth a download. It just feels like a massive missed opportunity. 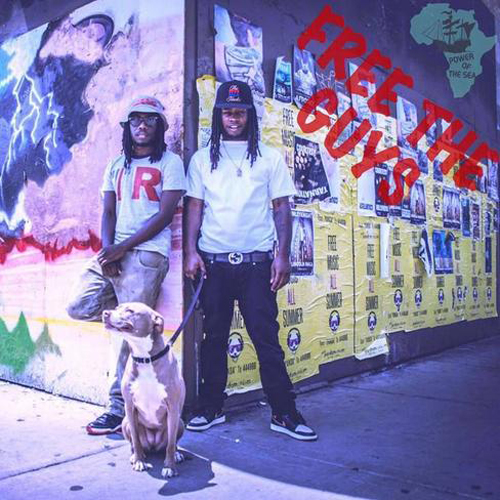 THE GUYS
FREE THE GUYS EP

For a duo that shot to notoriety on the strength of a track that featured the immortal line “I throw my money like a Pokéball and throw it on the floor, Ben Frank I choose you!” (last year’s excellent ‘Taxes’), their latest EP Free the Guys is surprisingly politically charged. Between a series of pounding tracks (mostly produced by the duo’s very own Fya Man), lie a trio of somber skits set to funereal piano music, musing on the crack epidemic, AIDS, black on black crime and the lamentable prison-industrial complex. The near-bop lightness that characterized ‘Taxes’ is all but gone, and it feels as if the heart of The Guys’ sound is markedly more serious than we may have thought.

That’s not to say it’s an entirely somber affair – those who prefer their music message-free can just head to the effortlessly memorable ‘Ferragamo Belts’ and its woozy autotuned hook. Occasionally the duo’s politicisms collide with the tracks themselves, particularly in the EP highlight ‘Chain’, boasting the chorus “My neck hurt from this chain / my wrists hurt from this chain.” Where Chicago so often seems split between the unusual jazziness of Vic Mensa and Chance, the teenaged party-loving abandon of bop and the roughneck drill of Chief Keef and King Louie, The Guys have managed to carve out their own niche and we can’t wait to hear where they’ll go from here.

Here’s a name we haven’t heard in a while: Kid Sister dropped ‘Pro Nails’ all the way back in 2007, her Ultraviolence album in 2009 and a mixtape in 2011, and while her dance-friendly brand of electro-rap might be popular now, it seemed that Melisa Young might have missed her moment — a point that her latest tape fully acknowledges.

The half-hour, trackless mix kicks off with a couple trap-EDM bangers very much in the Fool’s Gold mold; she strikes a much better pose by turning Jam City’s ‘Bells’ into a seductive R&B jam and, on the Lana Del Rey-sampling ‘Lying2Urself’, she reminds us how much we’d rather be hearing Kid Sister on the radio than Iggy Azalea. After a shocking mid-tape skit, she lays out her new M.O. on the a cappella ‘Get Another Plan’ and unveils a soulful new persona, Jane Jupiter.

From there, she tries out a sing-song flow on ‘All I Need’, gets funky with DaM-Funk on the Chad Hugo-produced ‘Higher’ and goes low-key house diva on ‘Sunshine City’. It seems that this is a new era for Young, and reading between the lines of her liner notes (“THANK U 2 EVERYONE AND ANYONE ELSE WHO HELPED ME FIND MY WAY OUT OF THE DARKNESS”), we’d say it’s a welcome one. 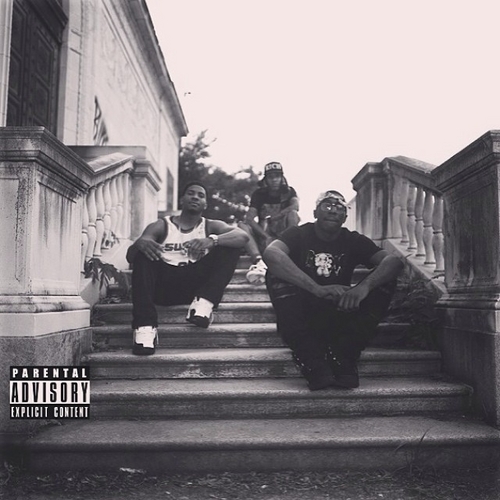 Philadelphia grafter Jahlil Beats steps into the frame on the optimistically titled Legend Dynasty, which, while unlikely to propel him from reliable beatmaker to double-threat rapper-slash-producer, is nonetheless a solid grab-bag of his diverse production styles. Either way, the Roc Nation signee will have more eyes on him than usual with this tape (his 16th, by our count) following his unexpected success with Bobby Schmurda’s all-conquering ‘Hot Nigga’ this summer, which makes use of an old Jahlil beat initially intended for Lloyd Banks.

Legend Dynasty is too diverse to really make a mark over its 14 tracks, and Jahlil’s verses are capable rather than captivating, but there are some gorgeous moments here and there, from the downbeat purplish haze of ‘Heart Drop’ to the twisted sax-funk of ‘Sinister’ (produced by his younger brother The Beat Bully), plus some ruffer, 808s’n’claps joints for the Meek Mill contingent and a smattering of East Coast throwbacks. 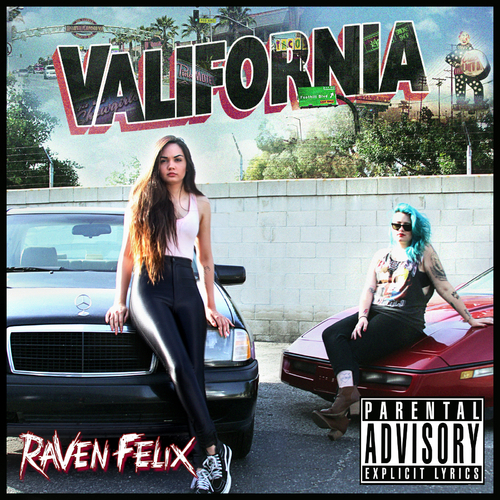 San Fernando Valley girl Raven Felix drops her debut mixtape after ruffling feathers with the, er, divisive ‘Work Drink Fuck Sleep’ last year. Essentially it’s white-girl rap for the post-Minaj, post-‘Fancy’ generation, who see pop and hip-hop as entirely coterminous, which it certainly can be in the right hands. Expect 13 ultra-glossy tracks of over-enunciated, hairbrush-in-the-mirror cheese (why is anyone using the words “when I be on the mic” in 2014?) and an embarrassing amount of catchy hooks, including a bonkers interpolation of Tom Petty’s ‘Free Fallin’ on ‘Joan of Arc’. You’ll know immediately if you can be bothered with this sort of thing, but if you try just one track, make it ‘In The Morning’, a reworking of ‘Gin & Juice’ as a Mustard-flavoured ratchet banger for your end-of-summer keg party, featuring a guest appearance from Snoop himself.