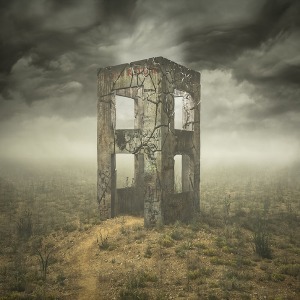 Before Spoek Mathambo, Shangaan electro and Die Antwoord blew up, South Africa’s electronic underground enjoyed brief global attention off the back of 2008’s ‘Township Funk’. A lo-fi but compelling shanty house track credited to one DJ Mujava, a producer from the poor rural township of Atteridgeville in west Pretoria, ‘Township Funk’ was snapped up by Warp, who no doubt noted the clear, if coincidental similarities between its raw, rugged electronics and the label’s early bleep’n’bass output – Forgemasters, Sweet Exorcist, et al. But Mujava himself dropped off the map as ‘Township Funk’ blew up, an online rumour mill suggesting, by turns, that he’d died, or got addicted to drugs, or ended up in a mental institution. He never made a proper follow-up (although he did resurface last year in a documentary, Future Sound Of Mzansi, and has since dropped a new Soundcloud track entitled ‘From PTA To Liverpool’).

War God, though, proves that Mujava was not operating in isolation. Also from Atteridgeville, Spoko (real name: Marvin Ramalepe) reportedly mentored Mujava, co-produced ‘Township Funk’, and had learned his trade some years before studying sound engineering under Shangaan Electro godfather Nozinja in nearby Soweto. His sound is in line with the essential hallmarks of ‘Township Funk’ – a minimal march of insistent reggaeton snare, snaking melody lines and pizzicato strings that Spoko himself calls ‘Bacardi house’. Bacardi house, and music like it, is essentially folk music in rural Pretoria, passed around via Bluetooth by taxi drivers and played out in impromptu “shebeen” clubs. It seldom makes its way into metropolitan areas such as Johannesburg, where mainstream house rules the clubs just like it does everywhere else, and where these roughneck, hick sounds would most probably be viewed with distaste, if not outright horror.

While informed by kwaito, a sound that’s pretty much synonymous with homegrown pop music in South Africa, Spoko’s music is more raw and minimal than most of the music that goes under that name – in part, you suspect, a matter of sensibility, and in part of necessity. It’s hard to record vocals when you live in a tumbledown shack with basic hardware, cracked software and corrugated iron walls; tricky to sample when you don’t have a reliable internet connection.

Still, War God feels like a curated collection, of sorts. Released on New York’s Lit City Trax, a label run by Future Brown’s J-Cush and boasting forward thinkers like footworker Traxman, Lisbon’s DJ Marfox and London’s Visionist, you sense these 20 tracks are chosen to home in on one aspect of Spoko’s sound. The likes of ‘Trigga Happy’ and ‘Motota Mutapa’, with their relentless rhythm and nagging, circular melodies echo ‘Township Funk’ in their sense of hooky immediacy, crisp simplicity and relative geographic non-specificity. DJ Spoko’s Soundcloud is packed with vocal takes, as was his 2013 EP for True Panther, Ghost Town. Conspicuously, though, there are barely any vocals on War God, which has the effect of stripping the music of any local or political connotations. Shorn of voices musing on folk wisdom or violence in the ghetto, War God instead chooses to present Spoko as production maestro, with a crisp, rhythmic sound that could be worked into a mix alongside house, grime or footwork without scaring the horses.

That said, War God remains distinctive. As its title suggests, Spoko has a taste for rhythms that feel almost martial in their barrelling forward motion. This is balanced, though, by a mournful, soulful quality that echoes the screwface melancholy of early grime: the teardrops of melody that fall throughout ‘More Pain’, the synthesized violins that dance atop the coldly dramatic ‘Angels And Devils’. There’s a nice moment towards the end, meanwhile, in the shape of a DJ Mujava collaboration that, with its punchy snare hits and breathless urgency, might just be an equal to ‘Township Funk’.

Bacardi house, for all its ghetto origins and brute minimalism, feels both accessible and adaptable – unlike, say, the hummingbird-speed dance of Shangaan electro, you could imagine this working on a reasonably open-minded dancefloor without eliciting puzzled glances. Whether it takes off anew, or just remains a local phenomenon, it’s good to hear the ghetto futurists of Atteridgeville, Pretoria enjoying another moment in the sun.