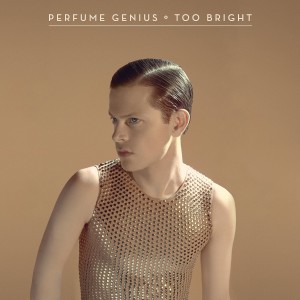 Microaggressions are so called because they barely even register in the minds of the aggressors. They’re the embedded, subliminal ways in which dominant groups – without intent or malice – inflict their dominance on marginalised groups, and make them feel their “other”ness daily. For some, it’s the use of loaded language that’s not explicitly offensive but marks out a difference: think back-handed compliments, or well-meaning observations that belie underlying prejudices. Seattle-based singer-songwriter Mike Hadreas, however, felt microaggressive societal undercurrents of homophobia in the unchecked looks of others. In a press release for his video for ‘Queen,’ the lead single from his third studio album Too Bright, he wrote, “I’ve seen faces of blank terror when I walk by. Sometimes from seemingly strong, macho dudes – somehow my presence confuses and ultimately scares them.”

‘Queen’ itself, complete with the strident video that sees Hadreas stomp through a corporate boardoom in heels and lipstick, takes hold of that confusion; with pomposity and humour, Hadreas draws attention to the fact that those dudes are looking, and he joyfully acts out their greatest fears. “No family is safe when I sashay” might just be the lyric of the year, complete with the weaponised thrust of the beat that follows. Even the whistling melody that dominates the tune, the lightest and airiest form of a chorus, is far from carefree – the storm beneath it propels it to something overwhelming, something out to physically flatten you. Too Bright is an album on which the micro is made macro: those stares that were held just that bit too long are forced to hold on even longer, and the trace fractures that they left in the object’s self-image are painfully cracked open, examined and filled up. A sashay becomes much more than a choice of movement. It’s a choice of urgent political importance.

Perfume Genius made his name with albums that swam through piano and guitar backdrops with lyricism that was honest to the point of crippling self-deprecation. 2012’s Put Ur Back N To It was steadfast in its commitment to laying bare the most painful and most transgressive of thoughts: on ‘Dirge,’ Hadreas borrowed sentiment from 20th century American poet Ella St Vincent Millay when he evoked silenced minorities as bodies buried in the ground. On Too Bright, those images, no matter how difficult to confront, no longer have anywhere to hide. Their edges are sharpened by the outlandishly weird production strokes and instrumentation of Portishead’s Adrian Utley and Hadreas’s longtime partner Alan Wyffels.

But it’s not as simple as enlarging the sonics with synth stabs and bombastic choruses. What Hadreas has achieved is far more nuanced; listening to this album creates the anticipatory buzz of watching a thriller through your fingers, always knowing that a deliciously dark twist is coming. In ‘Fool,’ he sets the scene with a brass-assisted, finger-snapping croon about a dress laid out “on the couch you bought”; two minutes, later, he’s sunk into a cavern formed from a beatless electronic hum, where his echoing, barely-there vocal is the only rope thrown to the listener. Chords swell along with his falsetto, before you’re wrenched back into an even more warped version of the opening, with Hadreas now “bleeding out” on the aforementioned couch. The temperamental ‘My Body’ pulls a similar move, as its verses waltz lightly around a stark chorus that churns with screams and industrial noise, Hadreas snarling “I wear my body like a rotted peach / you can have it if you can handle the stink.”

Elsewhere, like that playful whistle on ‘Queen’ that’s flipped into a threat, the album’s other single ‘Grid’ uses an exuberant playground-like chant as backing vocals, and yet distorts it nightmarishly into something that’s more reminiscent of the kids out of The Shining, before devolving into full-on screams. Hadreas has a million ways of unsettling you beyond simply screaming: on ‘I’m A Mother,’ he shocks not by shouting but by whispering, his voice obscured by a sombre electronic throb. There’s as much power to be gained here in making the listener lean in closer as there is in blowing their hair back.

By matching his unflinchingly open and vivid storytelling with a newly dynamic sound, Hadreas is no longer intimately communicating his inner life to empathetic listeners, but demanding attention from anyone who happens across his music. He’s putting himself in the spotlight, no longer waiting for permission to occupy it. The singer told DIY magazine recently, “the root of me believes that I’m as good as everyone else…[but] in my daily life I don’t really feel like that fully. This album is demanding respect and acceptance instead of just looking and hoping for it. I’m giving it to myself.”

On the breathtaking album closer ‘All Along,’ Hadreas sings “I don’t need your love, I don’t need you to understand, I need you to listen.” These words have a sinking reality for anyone who has ever felt marginalised; what Hadreas is demanding is an opportunity to be seen and heard, something oppressed groups are so rarely granted as their voices are microaggressively interrupted or overridden. Too Bright creates a captive audience in its effusive refusal to let you look away. It kicks down the furniture of song structure and ferociously retches up its choruses, gripping onto your gaze with its dazzling contortions, its unapologetic too much-ness. Stare at the sun just a bit too long and you’ll get spots on your vision; listen to this album a while and it might start to reshape the way you see.