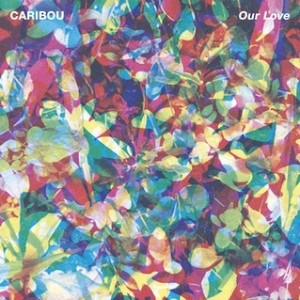 In a mini-documentary for the BBC back in 2007, Dan Snaith flicked through his record collection as a way of offering insight on his Polaris Prize-winning second LP Andorra. The essence of his Caribou project, he claimed, lay somewhere between his excitement over Wire’s “perfectly condensed pop song” ‘Outdoor Miner,’ and his love of the way “melodies are falling into one another…growing and falling apart” on a James Holden LP. Somewhere between tight pop and sprawling experimentation; somewhere between control and chaos.

Caribou’s fourth record, Our Love, is his most intimate yet. That tension – between longing for structure and revelling in pure emotion – is here a guiding force in not just musical arrangement, but in capturing all the frayed edges of a relationship. It’s no coincidence that the title is our love: an open-hearted exploration of all the contradictory and unconventional ways of feeling out a relationship. Opener ‘Can’t Do Without You’ is the album’s concept at its most literal: the cresescendos at their most warm and satisfyingly predictable, the sentiment never as straightforward after that first flush of infatuation.

Things get colder on ‘Silver’, a track that asks forlornly “where you gonna go without me tonight?”. The colourful ‘Julia Brightly’ launches straight into its crescendo as if you’ve woken up in the middle of a dream, and ‘Mars’ wraps flute melodies, sci-fi synths and hip-hop-style sample chops tight around an unrelenting percussive spine. After ‘Can’t Do Without You,’ there’s no discernible pattern to any of Our Love’s arrangements, but each feels like a marriage of awkward elements that shouldn’t quite work together as well as they do.

This is the immediate feeling with the Jessy Lanza-featuring ‘Second Chance’: although the instrumental and the vocal seem to push against each other, it nonetheless feels like a duet between Lanza’s voice and Snaith’s machines. Both are equal-bodied, both look for gaps in one another to make themselves heard, both dance tentatively toward and away from one another.

Other parallels appear not just within tracks, but across the record. The melody of closing track ‘Your Love Will Set You Free,’ which opens with “I can’t tell you how hard it has been since I left you” holds up a mirror to the “I can’t take it when you treat me wrong” of ‘All I Ever Need.’ There are crucial differences: ‘Your Love’ is more alien and metallic – and generally a lot gloomier – than ‘All I Ever Need,’ and while ‘All I Ever Need’ looks brightly into the future, insisting that the next love will be “the best I ever had,” ‘Your Love’ dwells painfully on a past relationship. In both cases, the lyrics showcase a man who’s having a tough time in the present, either looking to future promise or to memories for fulfilment.

Our Love is the Caribou album that best defines the tension between his electronic explorations and pop sensibilities, and his most cohesive sounding; tracks like ‘Second Chance’ show that it’s possible to have your melodies fall apart and grow together while still creating, like Wire, a perfectly condensed pop song. It’s an album that makes most sense when heard all together, in conversation with itself. Each track says something different, but with his honest subject matter and his unique arrangements constantly in focus, Snaith never loses his way.