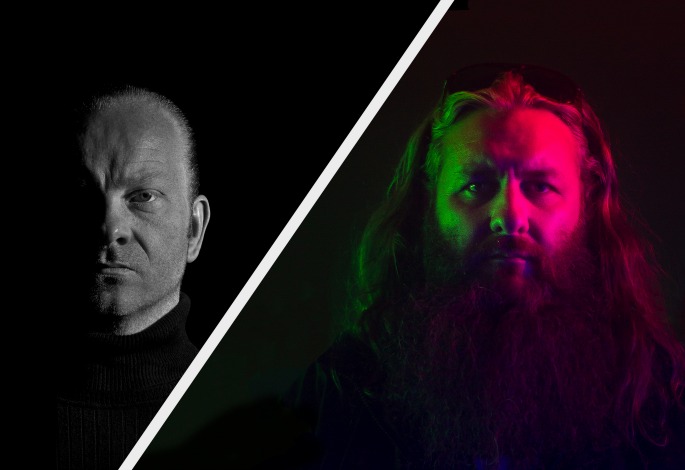 The project began when Uwe Schmidt watched Fox’s sound and laser show at Unsound Adelaide, where the two artists began to work out how they could combine experimental sound with lasers, videos and their own deconstructed take on pop music.

The result will be unveiled for the first time at Unsound Krakow on October 17, with another performance set to take place at Unsound Adelaide in March 2015. If you’re not heading to Poland this weekend, an excerpt from Double Vision can also be heard via The Wire.

FACT’s Tam Gunn spoke to Schmidt and Fox ahead of their performance to find out more about the idea behind the show and their mission to “counter-hijack” pop from the mainstream.

Could you tell us the basic genesis of Double Vision – how you two came to collaborate on it?

Uwe Schmidt: I first saw Robin’s work at the Adelaide Festival two years ago. I had just heard about his work before, but never seen a live show. Needless to say, I very much liked what i saw and found it very inspiring to imagine Robin’s scientific approach within a broader spectrum of entertainment, such as “pop” for example. After Adelaide I told Mat Schulz (Unsound) of my idea and he found it sufficiently interesting to pass that idea onto Robin. Both, the Unsound and Adelaide Festival then commissioned “Double Vision”.

Were you two aware of each other’s work prior to Unsound Adelaide?

Robin Fox: I’ve been an admirer of Uwe’s work across a number of projects for years now, so the chance to collaborate is a thrill for me. I’ve never seen an Atom performance live. It’s been on my list for a while.

The press info for Double Vision refers to “deconstructed pop music” – something you also explored on your album HD, Uwe. Where do you stand on pop music? Do you spend much time listening to it?

US: First of all, “pop music” is just one element to appear in Double Vision, and not the key element! Further, “deconstruction” is just one method, yet not the method applied for the Double Vision project. I think a wide array of genres and methods will be applied for that project and I find that “deconstructed pop music” does not fully describe it (yet does it have a place). That said, I am in touch with pop music as I am in touch with almost any other genre, that is, I am not following it very much, yet [I] get in touch with it every now and then.

My interest in music is not related to genres, but rather to “topics” or “ideas” in the widest sense. Consequently those ideas may pop up in basically any genre or historical/cultural background. However, I consider “pop” a very special genre, since it deals with what supposedly is considered “popular”. That in itself is a vast realm to explore, not only musically but much more so sociologically. Every now and then I deeply doubt that something such as “the popular” does exist, but I may be mistaken.

RF: I love to listen to pop music. Particularly ’80s pop music. For me it forms an essential part of a self-imposed regressive psychotherapy. I like Uwe’s description of his interest in music being wider than genre. I think it’s a great way to describe how a lot of musicians engage with sound these days. Working in experimental circles, pop usually gets a pretty bad rap and is considered ‘throwaway’ music. I don’t subscribe to that dismissive point of view.

Keeping with that theme, do you feel that pop music needs to be – or should be – “deconstructed”? Why does deconstructing it appeal to you, and what conclusions or results do you hope to get out of doing so?

US: I wouldn’t focus that much on the “deconstruction” aspect, that is, what is writen in the press info. My interest in “pop”, or basically any kind of music lays in the possibility to expand, merge, edit or in any form “play” with it. In that sense “pop” is just one genre I find interesting and worth exploring. That said, I do find that especially pop music has turned into a terribly boring territory over the last decades (with the exception of the [occasional] stroke of genius), hence the bigger my interest in playing around with it. Since pop, by definition, deals with and contains popular consciousness, it’s even more exciting to edit and explore it in a playful manner.

I specifically think that current pop music very much fails to incorporate many aspects of popular culture, that is, what the mainstream allows to carry along is just a small aspect of what pop could be today. Further, I do believe that pop has lost its edge, especially during the ’90s, and that so-called “electronic music” hasn’t sufficiently delivered said edge. After pop music has hijacked all kinds of “underground” genres (EDM, etc.), I suggest we counter-hijack now.

Robin, you’ve worked with artists like Robert Henke in the past. When you’re collaborating with a noted musician, how much of it is 50/50 – in the sense that you find a middle ground between the music and the visuals that suits both of you – and how much of it is simply you figuring out the right kind of visuals for their music?

RF: To be clear, I presented a double bill with Robert. He presented Lumiere, I presented my RGB laser show. We didn’t collaborate on the making of any work. In general, I don’t make visuals for people. The work I make is intrinsically audio-visual as the electrical signal I’m producing manifests as sound and light simultaneously. This intermedia synaesthesia is essential to what I’m trying to achieve in my work. With collaboration generally, then yes, 50/50 is the goal. As Uwe and I both work with audio-visual materials, the challenge will be merging these complete universes to make a sensible whole.

What are the key visual inspirations or influences on Double Vision? And where does the name come from (as obvious as it seems to ask)?

US: My key inspiration is to create a live show which spans all kinds of sensations and musical/visual approaches, ranging from the very experimental to pop and back. The inspiration is very simple and playful, in the sense as that I see all those multiple possibilities and musical/visual components laying in front of us and just feel the desire to make them all work in a new and hopefully different live show. Every single element, music, video and laser, holds unique and different possibilities, which, up until now, have not been explored in a setting we intend to explore with Double Vision.

RF: As the name suggests, the performance will present two merged visions of audio-visual materials. The inspiration in our initial conversations was to work on a show that could mediate between pop and almost a scientific demonstration of AV phenomena.

Do you think Double Vision is a project that somebody could come at blind (ahem) and still enjoy, or do you think someone has to be fairly deep into music and visuals, to the point where they’re familiar with your work, to understand it?

US: I really hope it “works”, “as is”, without any previous briefing needed. In general, every single live set or show I perform is conceived that way – “it” has to communicate in the very moment – no pretext needed.

RF: It is always my aim that anything I make can be enjoyed by anyone. I am not a fan of deliberate obscurantism. Obviously people with different levels of exposure to different forms of expression will have radically different views and experiences. That is essentially what an audience is.

Is this going to stay a one-off project, do you think, or will it continue at other festivals or live shows?

US: Double Vision will be performed at the Adelaide Festival 2015 and hopefully on other occasions throughout 2015 and beyond.

RF: I would like to see the project develop as we are able to spend some time in the same room with the materials. To me there is a big difference between remote or ‘virtual’ collaborations and the reality of making sound and image in a space together.