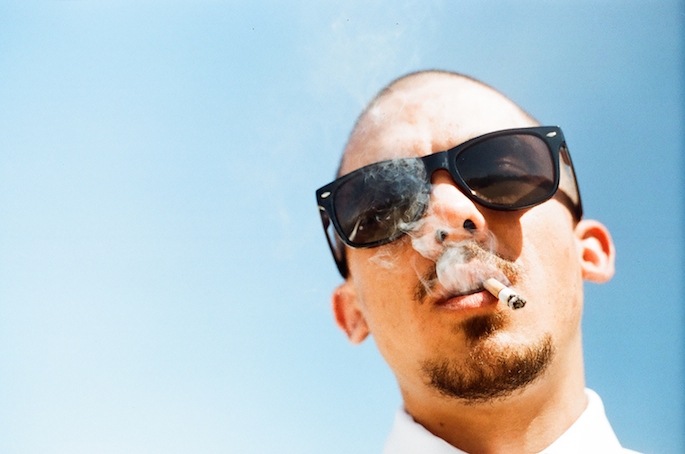 Mike G (not to be confused with the Odd Future talent of the same name) has been a regular fixture in the US club scene for a few years now, releasing bass-heavy material via Car Crash Set, Paradisiaca, and Main Course.

His latest offering, the Blackjack EP, might be his best yet: two sword-swinging, gun-cocking club constructions guaranteed to go off in a club. The EP is rounded out by remixes by his underground club contemporaries: grime specialist Rabit reworks ‘Pool Tool’ and FACT contributor SPF666 gives it a “dub destruction” mix; Supraman and Korma take on the title track.

Blackjack is due out on October 28 via Car Crash Set. Stream the EP in full and check out our Q&A with the producer below.

How did you get into DJing and producing?

As an angsty teen in the mid-’90s, I was really into punk rock and stuff like that. By chance I heard Atari Teenage Riot; their punk rock guitar riffs and screamy vocals really drew me in, but the amen jungle breaks that they used became really infectious and I was hooked.

Once I started going to raves in high school, the whole DJ thing seemed so appealing, but I couldn’t afford DJ gear. I pirated a copy of FL studio and would just make gabber/jungle hybrid tunes in my bedroom. Once I finally got DJ equipment I went 100% on DJing and 0% on production. So I’ve actually only gotten back into producing seriously about 3-4 years ago.

What was your inspiration for the EP?

For this release I really went for a stripped down, dare I say it, club tool type of vibe. No synths or melodies. Just basic, no nonsense, no frills club tracks that can fit in a myriad of DJ’s sets.

What were you looking for in remixers?

For the remixers, I really wanted to showcase the talents of my friends from here in Texas and my buddies from the internet whom I feel are really doing some great things. Rabit is obviously on fire right now; Supraman flies under the radar, but is doing things with music here in Austin that literally nobody else does. I see big things in his future.

SPF666 is just a beast and versatile in his sound and Korma is so young and hungry and I feel he’s got great things ahead of him. More importantly, I felt like they are all like minded producers who really seem to have a hold on their sound and could each bring a unique vibe that would still fall under the same umbrella musically.

Any “secret weapons” you’ve been playing in the club?

I’ve had a few go to tracks lately that I can’t get through a set without playing. Cattroska’s DMX club track is my go to right now, as well as his Divoli S’vere ‘Get Like Me’ remix. Anything that Patrick Brian and Miss Modular have sent me lately; Timbah’s ‘Return of the Samurai’ is a monster tune; and this super cheeky mashup-edit thing I did of Mumdance and ‘Crank Dat Soulja Boy’ has been quite a crowd pleaser to my surprise.