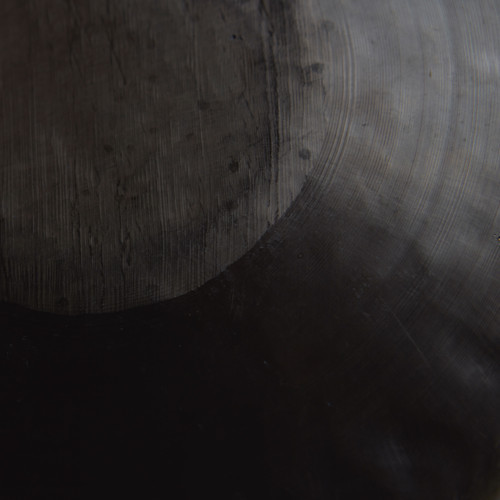 Two revered figures from the experimental circuit, drummer Jon Mueller and composer Duane Pitre, have unveiled an album-length collaboration inspired by ‘The Inverted Torch’, a poem by Edith Matilda Thomas.

Wisconsin-based percussionist Mueller, who boasts a huge catalogue of albums (including a pair recent releases as Death Blues) alongside his regular gig a as a drummer in Justin Vernon’s Volcano Choir, brings his gong collection to the table while New Orlean’s Pitre contributes bowed cymbals and his own collection of Max/msp patches.

They combine on two lengthy pieces, ‘No Longer of Our Time’ and ‘A Fading Light Within its Place’, which use the poem’s text as “the starting point in a process that allowed them to discuss change, life, time and human action as they blended real-time performance with synthetic elements seamlessly,” according to the label.

Pitting electronics against the pair’s ‘real’ clanging instruments, the result is both contemplative and unpredictable – close the curtains and stream the whole thing below. Inverted Torch is out on November 19 via Type (full disclosure: a label independently operated by FACT’s John Twells).