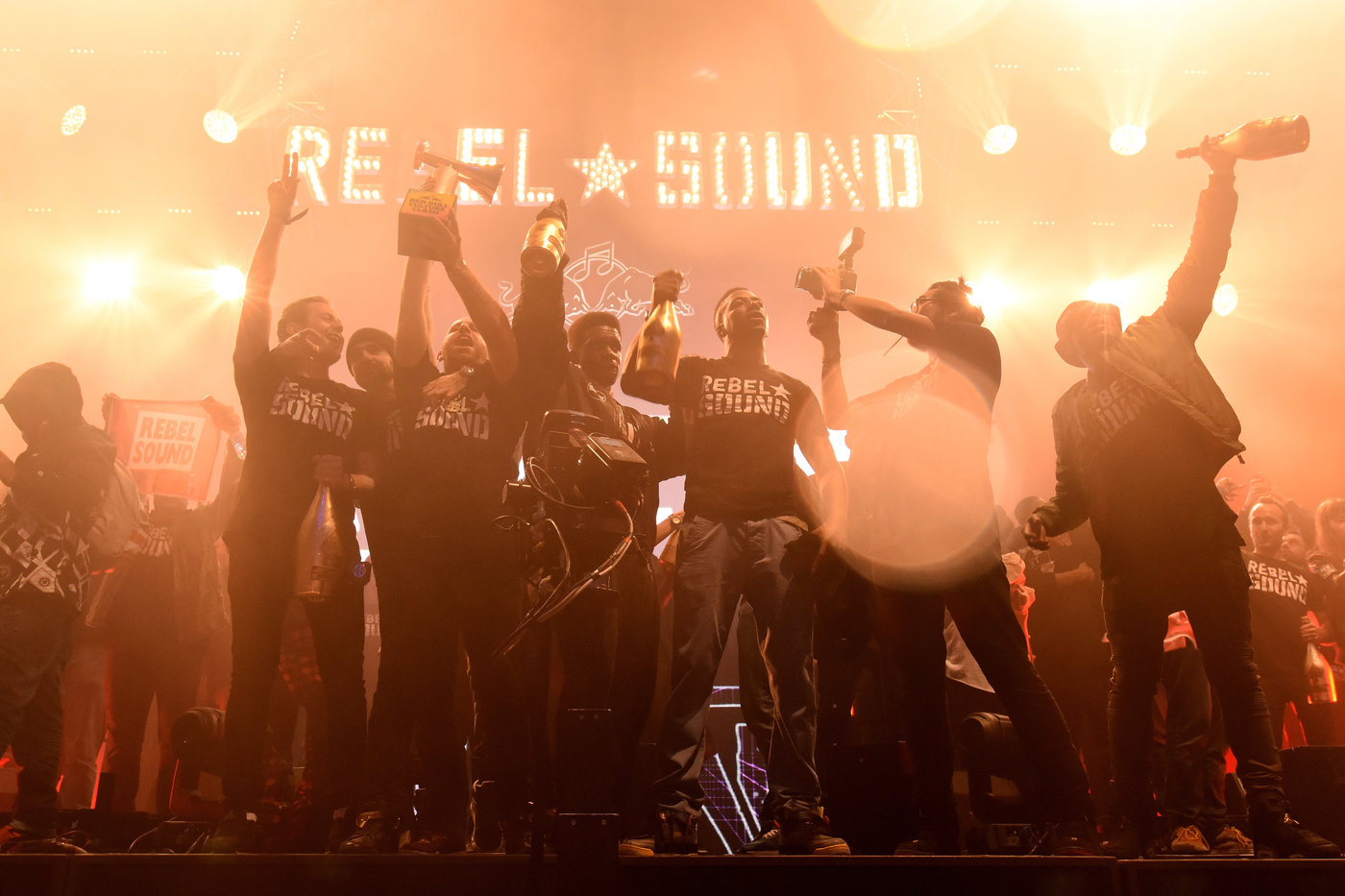 Last night at Earls Court, the Red Bull Culture Clash pitted some of the best from grime, hip-hop, reggae and drum’n’bass against each other in a four-round soundclash. FACT’s Mr. Beatnick was on site to cover the digs, the dubplates and the drama.

Arriving at Earls Court last night for Red Bull Culture Clash, we were immediately struck by two things. Firstly, the enormous scale of the event – 20 thousand strong this year, and one of the largest raves we’ve ever witnessed – and with the youngest, most gender balanced crowd I think we’ve seen at a rave too, all screaming their lungs out and bursting with energy from the moment the doors opened at 5pm.

Thousands of kilowatts of power were driving four huge scale sound-systems, one for each team; reigning clash champions Boy Better Know, New York newcomers A$AP Mob, Jamaican stalwarts Stone Love, and Rebel Sound, a concocted squad of old and new in the form of David Rodigan, Shy FX and Chase and Status. With a roll call of secret superstars waiting to be brought on stage during the course of the battle, it promised to be nothing short of spectacular, and judging by the ensuing social media meltdown last night, we think it’s fair to say it was.

If you didn’t catch the stream or win a golden ticket, here’s a brief blow-by-blow. We’re going to completely ignore the official round winners and assign our own scores, based on our own non-scientific criteria as viewed from our vertigo-inducing perspective up in the VIP crow’s nest, tucked in between Alexandra Burke and the cast of Made In Chelsea. Bonus points will be awarded for solid songs, good DJing, wacky behaviour and generally being as rude and obnoxious to fellow contestants as possible. [Note: the official results were deliberated using an array of decibel meters to measure crowd volume]

BBK open proceedings gunning for war. It’s a flying start, and they tear through all the favourites you would expect like an ultimate grime version of ‘Stars On 45’ – JME batters out ‘Serious’, Frisco and Solo 45 trade bars, Skepta runs out for ‘That’s Not Me’ with JME and the pair of them get the first serious noise of the night – only surpassed by the sudden appearance of Wiley. Yes, the godfather has actually bothered to show up, delivering a very strong PA of new banger ‘On A Level’ before disappearing into the wings. Jammer does ‘Murkle Man’ dressed as, well, the Murkle Man, and in a dizzying climax they drive the Void system to its limits with ‘Too Many Man’ and ‘Shakey’.

It’s a bit like watching Germany smash out three goals into 10 minutes, but our camp immediately wonders if maybe they’ve peaked too early. Stone Love struggle to return fire, despite being musically strong too – Damien Marley’s ‘Welcome To Jamrock’ gets the inevitable forward, as does Sister Nancy’s ‘Bam Bam’, and they throw cross-genre curveballs with the likes of Lethal B’s ‘Pow’ and A$AP Ferg’s own ‘Shabba Ranks’ – but Rebel Sound put up more of a fight. First, Rodigan cackles as Trevor McDonald [above] appears in a faux-TV report to cuss the opposition, then the team’s DJs rain down a barricade of jungle favourites old and new – from Roni Size to Chase and Status. Their system is by far the clearest and heaviest sounding and the pace of selections and smooth mixing seems to be winning the crowd over.

A$AP Mob end the round on a lethargic tip, playing through favourites like ‘Multiply’ and ‘Work’. One wonders if their demeanour is largely down to the enormous sacks of green that on-stage guests Piff Gang have brought with them – clearly the concept of “clash” hasn’t really registered. On the positive side, Rocky does ride a quad bike onto stage, and a backstage rumour suggests he’s brought loads more gas guzzlers with him but that Chase and Status have nicked the keys.

FACT verdict: BBK won this by a country mile, though we also enjoyed Stone Love’s selections. Half a point to A$AP Mob for their antics, and another half point to Rebel Sound for telling BBK their acronym stands for “Big Batty Kissers”.

Definitely the Round where Captain Rodigan and the good ship Rebel Sound begin to sail considerably ahead of the others – not surprising considering the experience of the man at the helm. Opening with a Sampha dub plate of ‘Too Much’, other highlights of their set include a Max Romeo dub of ‘Chase The Devil’, and a return-fire remix of Skepta & JME’s ‘That Not Me’ from Round 1. To a chorus of boos, cheers and the sound of thousands of pubescent grime fans going “cheeeeeeez!”, Rodigan brings out defector Tempa T, who promptly slays everyone with ‘Next Hype’. BBK are seriously annoyed – JME gets their supporters chanting “Tempa, PRICK, Tempa, PRICK”.

A sluggish A$AP Mob muster a good sequence with Flocka’s ‘Hard In The Paint’, Lethal B’s ‘Pow’, Chief Keef’s ‘I Don’t Like’ and finally ‘Niggas In Paris’, whilst BBK draw for ‘Ghetto Kyote’, ‘Woo Riddim’, and bring out Lethal B himself to do ‘Pow’ proper. Stone Love opt for dancehall classics – Barrington Levy, Elephant Man, the ubiquitous and highly appropriate ‘Rum & Redbull’ – and bring out Stylo G to do ‘Call Me A Yardie’.

FACT verdict: We loved BBK’s vintage grime selection and Stone Love’s dancehall vibes, but Rebel Sound took the crown in this round with that Tempa T power move. The look on BBK’s faces was a sight to behold.

The title of this round was Sleeping With The Enemy, the idea being that each crew would use the other’s riddims to send back at them in a musical Mobius loop. Sadly BBK put a middle finger up to the rules, claiming that they didn’t like the opposing teams’ songs enough to play them. Some great pars in this round from the camp, namely from Skepta (“Chase & Status can’t fight their own battles so they called their uncle and granddad”) and Jammer (“Lets not call them Stone Love, more like Stone Age”.

Rebel Sound bring out the cast of Kurupt FM as an oblique intro to a re-vocal of ‘With A Little Bit Of Luck’ and then reel out dubplates by Pusha T, Ghetto, Riko and Emile Sande, who calls out BBK (“fuck Jammer, fuck Skepta”) over ‘Pulse X’. Stone Love have their strongest round, musically speaking (Rick Ross, DMX and Ruff Ryders classics, 50 Cent and two versions of Buffalo Soldier) but it feels like the pace is too swift and they aren’t letting the tracks catch the audience reaction properly. A$AP keep things simple with Tenor Saw’s ‘Ring The Alarm’, Juicy J’s ‘Bandz A Make Her Dance’ and G.O.O.D. Music’s ‘Mercy’ instrumental getting a surging forward.

FACT verdict: Tough call – we’re giving BBK extra points for the pars, but their tunes were all over the place, and we’re deducting Rebel Sound points for Emile Sande. First win of the night, then, for A$AP Mob, just ’cause ‘Mercy’ is essentially unbeatable.

The final round, purely dubplates and specials allowed – this should separate the wheat from the chaff. Rodigan is not ramping – opens by calling A$AP “a living joke in London tonight” and telling Rocky to go live in Atlanta because he can’t go back to Harlem, and then plays a dubplate by Rihanna (‘We Found Love’ re-versioned to say “Rebel Sound killing BBK / Rebel Sound killing A$AP Mob”, etc) which stuns the crowd for a few seconds. A$AP bring out Danny Brown, who finally blows the cobwebs out of their stage with a great rendition of ‘Blueberry (Pills & Cocaine)’, though he also shows up A$AP Mob’s own performance.

BBK’s round peaks with a great rendition of ‘R U Really Really From The Endz’, their best effort of the night and a vintage BBK performance in all senses, while Stone Love draw for dubs of Jimmy Cliff’s ‘The Harder They Come’ and Millie Small’s ‘My Boy Lollipop’, which sends a shriek round the arena so high-pitched you can hear windows shattering.

FACT verdict: Stone Love won this individual round for us, on the basis that they had everyone from Alexandra Burke to Wretch 32 pulling out their best old school dance moves to ‘Lollipop’, but Rebel Sound were deserved winners overall.