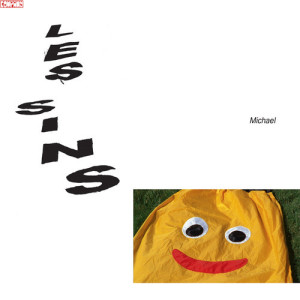 Or, as you might call it, Chillwave Exit Strategies: Volume 1. After three albums released as Toro Y Moi, South Carolina’s Chaz Bundick has flipped pseudonyms and reappeared as Les Sins. His debut album follows on the heels of past 12-inches on Carpark and Dan ‘Caribou’ Snaith’s Jiaolong label, and perhaps the choice of the latter is instructive. As Daphni is to Caribou, so Les Sins is Toro Y Moi: a premeditated attempt to make music at a dance floor tempo. Whereas Toro Y Moi fished around in the flotsam and jetsam of ‘80s drivetime pop, gently détourning of the pastel shades and smoothed corners of Hall And Oates and Kenny Loggins, ‘Talk About’ finds Bundick turning his washed-out pop sensibility to house music, disco and grime. Compared to most club music, Michael feels dreamy and laid-back. Next to Toro Y Moi, it’s Motörhead, pretty much.

The result is a jumble, although weirdly rubbish cover aside – seriously, what’s that all about? I thought this was supposed to be music for graphic designers – often a fairly likeable one. The opening ‘Talk About’ commences with what appears to be a soft jab at lazy journalists – “Talk about your newest record,” drawls a voice, “and where did you get the name?” – before Bundick drops a four-to-the-floor house beat, smearing on heavily filtered synths and a black male vocal neatly filleted into footwork-y repetitions. ‘Past’ takes a dip into the darkness, layering wheezing, faintly Arabic organ drones, flickers of percussion and snarls of mid-range as a sung vocal gives the kiss-off to a former lover. ‘Toy’, meanwhile, has the dextrous motion of a long-lost grime instrumental, with its flutters of synthesized flute, stuttering kicks and novelty sound effect, an occasional Roadrunner meep-meep.

It is part of Bundick’s sensibility to cover a fair bit of ground. Quoting an inspiration of his, the American graphic designer Paul Rand, he says Michael works to the maxim “don’t try to be original, just try to be good”. This is a very chillwave sensibility, and one with clues to this music’s strengths, and also its weaknesses. Like other forms of internet music – witch house, seapunk, vaporwave – chillwave is casually appropriative, lacking in a sense of temporality or any firm geographic tether. It doesn’t really set out to mean anything in particular, and indeed appears to view the idea that music ought to set out to mean something as slightly antediluvian. When discussing the making of the record, Bundick didn’t reach for club metaphors, but the idea of the driving playlist. “The one thing I can see myself doing when listening to those songs is driving,” he told Noisey. “Driving in the daytime, driving at night – I just wanted, like, a really fun soundtrack. There’s some really nice drives in California. When you’re living around the Bay Area you can drive to the water in about 45 minutes, and that’s the perfect time for an album.”

As an approach, this doubtless feels liberating. It means Bundick can casually turn his hand to something like ‘Why’, a bohemian disco built from creamy chords, stuttering conga and Nile Rodgers-like jitters of guitar, topped off by Nate Salman’s lightly optimistic vocal. It’s pristine and perfectly wrought; but hard to shake the sensation this is a copy of a copy; disco channelled through the prism of Daft Punk’s Discovery. There is much here just as agreeable, if similarly slight: the moody, pitch-black electro soul of ‘Minato’; the squidgy keytar jams of ‘Sticky’; the buff stretch and flex of ‘Bother’, with its chopped-up “Don’t bother me/I’m working” vocal refrain; the limber junglism of ‘Drop’.

As an artistic step forward, Les Sins certainly registers. The key hallmark of chillwave is a slight insubstantiality, a barely-thereness; little wonder that any artist wishing to make a career out of music will eventually want to add some meat on those bones. Perhaps the issue with Michael is that Bundick can’t decide quite what he wants to be yet, and won’t be rushed. You listen for a strong, consistent voice at the heart of this music in vain. Instead, Bundick is his own audience, and a forgiving one, wanting for nothing but a few sweet tunes to kill that hour it takes to get to the coast.