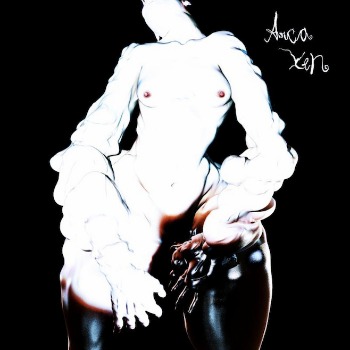 In a recent interview with The Fader, Arca expands on how he named his debut LP after a genderless alter ego, a fictional entity that he describes as “kind of repulsive and attractive at once, and so I imagine her under a spotlight, in this room full of people just staring, wide-eyed, openmouthed.” The image of a person under a spotlight seems appropriate, given that Xen arrives under the weight of considerable expectation despite Arca’s relatively thin discography as a solo musician, with only a brace of EPs for UNO and the excellent &&&&& mixtape to his name alongside production work for high-profile artists. It also frames Xen as a kind of elusive, contradictory self-portrait perfectly suited to the album format, with Alejandro Ghersi given free range to explore his themes in full. As it turns out, the reality is quite different.

Ambiguity is Xen’s thematic centre, and as such it’s hard to pick out highlights barring ‘Thievery’, a lead single of sorts and the album’s most finely executed track. There’s a baroque bent to Arca’s synths here, as they describe a dazzling arc that abruptly crescendos and dissolves against sharply outlined beats, the whole thing propelled forward by a lurching rhythm. ‘Sad Bitch’ is wonderfully spare, its darting synth figures quite gorgeous and at odds with its ridiculous title and much of the rest of the album’s deliberate ugliness, though of a piece with the overarching theme of the coexistence of ugliness and beauty. ‘Sisters’ builds almost conventionally over a martial rhythm, a patchwork of glimmering synths and clattering beats whose inability to gel together is bizarrely satisfying.

The rest of Xen is rather hit and miss. ‘Tongue’ and the title track’s caustic textures and rasping strings are redolent of Mica Levi’s disturbing Under The Skin soundtrack album, and ‘Family Violence’, with its crisp string figures that flit manically, less violent than skittish, bring to mind Kuedo’s colourful, Vangelis-inspired music. The hip-hop beats that provided &&&&& with its ballast are largely missing here, and what beat-based tracks there are, such as ‘Fish’, are notable for their total disregard for pulse or momentum. Rather than providing a rhythmic framework, beats are by and large incidental to Arca’s experiments with texture and timbre. Take ‘Bullet Chained’, where the thumping kick drum and guttural “yah” take a backseat to a barrage of disorienting crashes and swooping, queasy synths. While these tracks and many more are certainly unusual, there’s very little about them that’s emotionally affecting – surprising for an album described by its creator as a kind of self-portrait – and with an average track length of about two minutes, many of them simply don’t stick around long enough for their jarring qualities to have any lasting impact.

Given Arca’s background working as a producer for the likes of FKA twigs, Björk and Kanye West, and his releases to date, it may be odd to think of Xen as premature, yet it feels unfinished or incomplete. For one thing, the sequencing is haphazard at best, with tracks seemingly glued to one another arbitrarily rather than describing any narrative order. Arca has spoken in interview about the store he sets in online communication – he met his longtime visual collaborator and flatmate Jesse Kanda on the social network DeviantART, where users share images of often heavily stylised artwork and photography – and much of Xen bears this out. The fragmented nature of the tracks themselves has a fitting analogue in a life represented online, especially in relation to the disjointed nature of taking in information via tabbed browsing and rabbit holes of links, YouTube clips and related content. Maybe the sequence as it stands is intended to express the overload and chaos of the online world, but I’m unconvinced that pasting tracks in apparently random order is particularly effective. Perhaps, then, the album format is to blame, too dated a vehicle for Arca’s conceit, his ideas better suited to the primarily digital modes of videos and online mixtapes. Yet something seems amiss about pinning the flaws of this LP on the format when plenty of artists far weirder than Arca have worked within its parameters just fine.

In one sense, Xen sounds self-consciously hyper-modern; every surface gleams with an unsettling digital shine, but when considering points of reference, that sense of hyper-modernity can fall a little flat: ‘Sisters’ and ‘Fish’ recall Chiastic Slide-era Autechre, and ‘Slit Thru’ has an IDM/trip-hop tinge that doesn’t feel especially new. The glittering surfaces of individual tracks often bring to mind a macro photo of a snowflake – exotic and intricate, but fundamentally insubstantial, with promising ideas that are seldom realised in full. Textures that are abrasive at first grow predictable and unthreatening by the latter third of the album through over-use. A couple of bland filler tracks only underline the frustrating feeling that this would all work much better if the album were drastically trimmed and served up as an EP.

Even if his chops as a producer aren’t in question, the writing on Xen is too patchy to fully realise Ghersi’s ambitions. Still, it’s hardly lacking in ideas, and it’ll certainly be worth keeping an eye on Arca to see where he takes them next.