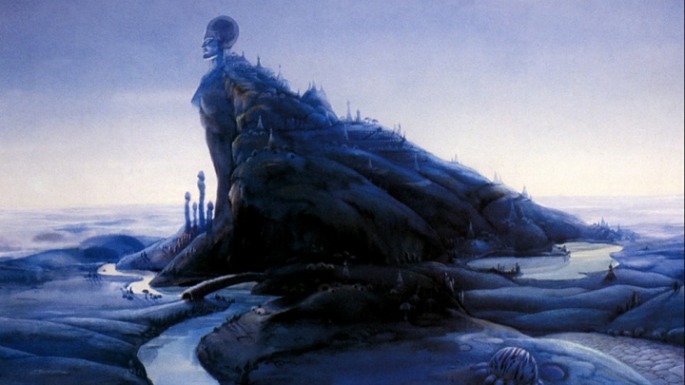 The London producer promises a “rule-breaking” makeover for the French film.

Roly Porter has already made his name as one of the UK’s most ambitious young producer-slash-composers, first as part of dubstep duo Vex’d and more recently with 2013’s overwhelming mini-epic Life Cycle of A Massive Star. Now he’s about to impress us again with a live re-score of ’80s sci-fi animation Light Years.

The French film, directed by René Laloux and originally titled Gandahar, is being screened at the British Film Institute in London on November 21 as part of its sci-fi season Days of Fear and Wonder. Porter’s re-score is a dramatic dismantling of the film’s audio, adding new sound effects “from waves crashing to laser beams” and removing other sounds and dialogue entirely.

The BFI approached Porter with the suggestion of doing a re-score several months ago, but finding a suitable film proved difficult, as he explains. “After the arduous task of watching through pretty much every sci-fi film I could think of, I began to realise that my love of the genre is not based on any single film but is a strange mash of film, fiction [and] art all combined,” says Porter.

“Much of my favourite sci-fi is animated, from Akira to Ulysses 31. Gandahar/Light Years felt a perfect choice as it had the scope to be completely transformed with a different score. The original music for the film played well to the ’80s action sci-fi themes in the film, but there are lots of more complicated and interesting themes about time and genetic engineering, and some beautiful ambient sequences that were really underplayed.”

Porter has chosen to re-score the dubbed English version of the animation, which gave a production and translation credit to Isaac Asimov and, controversially, gave the director credit to producer Harvey Weinstein.

The film’s frequent nudity and complex ideas about the nature of time and space are not what you would expect from an animation, adds Porter, and he hopes to bring them out with “a more challenging, aggressive score.”

“Unlike a regular score I am not only replacing the music but replacing the majority of the sound,” he adds. “This means that everything from waves crashing to laser beams is new and integrated into the music. Scenes are less clearly defined and I haven’t followed many traditional rules of scoring. In some cases dialogue and sfx are removed completely with the aim of making the whole experience more intense and less literal.”