Dancing to the silent beat: St. Louis storyteller Coultrain on the latest chapter of his Seymour Liberty opus 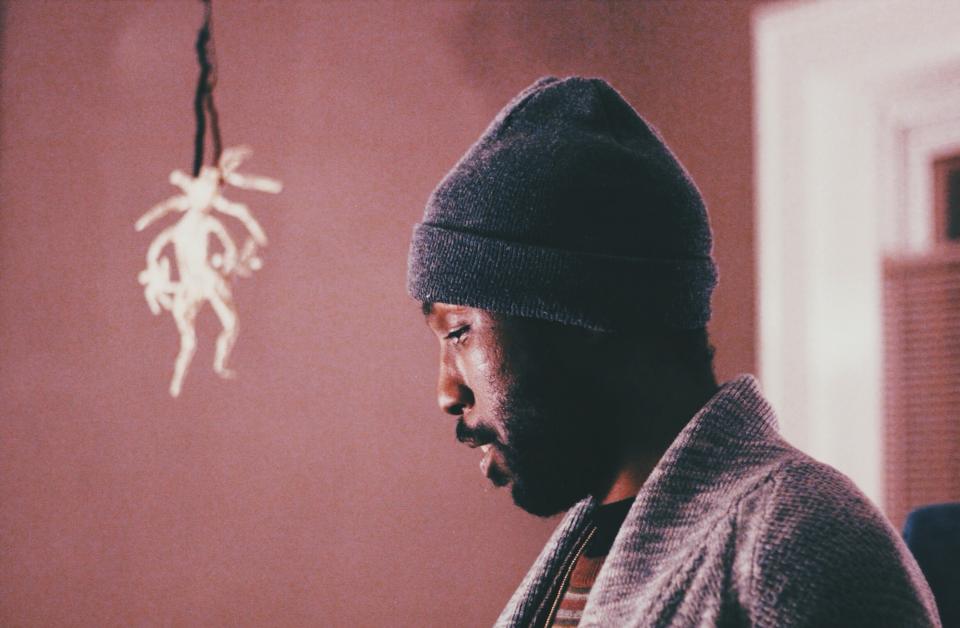 Nothing is true, everything is permitted.

St. Louis’ Coultrain is a man of many facets: drummer, visual artist, singer and poet. It’s the words that have defined Coultrain’s career so far, both as a solo artist and as part of the Hawthorne Headhunters, whose debut album Myriads of Now on Plug Research is a slept-on modern soul gem.

In 2008, Coultrain began telling the story of a character named Seymour Liberty. Across four releases, Coultrain has weaved a consecutive, first-person account of Seymour’s life. Blurring the lines between imagined and autobiographical, Seymour Liberty’s story continues in Side Effex Of Make-Believe; divided for love’s sake, a six-track EP released this December by Fresh Selects.

The last chapter of Seymour’s story, 2012’s Jungle Mumbo Jumbo, saw him fall for a murderous widow. The repercussions of this forbidden love affair are explored on Side Effex Of Make-Believe; divided for love’s sake with Coultrain laying his raw yet soulful vocal stylings over stripped back productions from fellow St. Louis artist, producer Stoney Rock.

I caught up with Coultrain by email to find out more about Seymour, abstraction and the power of words. Alongside this is a premiere of the EP’s opening track, ‘Kiss Of Death’, which you can hear below.

The EP is released December 21 on cassette and digital via Fresh Selects.

How was the writing process between yourself and Stoney Rock, who produced the new record?

When Stoney and I work together it’s very much a loose process most of the time. With this EP, because it’s an extension of the story that I’ve been writing for several years, the subject matter is very much a solitary process for myself. That being said, we discuss sounds and moods and colors. From that point I choose what compositions fit the initial idea and go from there. We never go into it with an actual plan of tempos and production, just atmosphere and feeling. And even those things arent specific, they just are.

What drove you to write about Seymour’s ‘love life’ for this project? A natural evolution of the storytelling so far?

Well, from what he told me, that affair had a huge impact on his life. Not because it was “about” love but rather WHO he was in love with. Every now and then you encounter beings you can’t explain and because our language is so limited and lacks romance, on the superficial level it looks like one thing when it is in fact the complete opposite.

You’ve mentioned before that the difference between yourself and Seymour is just three inches to the left. As such how much of the story being told on this release is based on your own real life experience and how much is extrapolated, imagined?

Imagination is a magic carpet / Upon which we may soar
To distant lands and climes / And even go beyond the moon
To any planet in the sky / If we came from nowhere here
Why can’t we go somewhere there?

All this is imagined. It’s all make believe.

Words can spell, they can liberate, they can conjure. Intention is the
relevancy.

What are the benefits of telling the story of someone like Seymour across multiple ‘chapters’, each of which takes a different form (so to speak)? It strikes me as both a risky thing to do – considering most people’s attention span these days but also the realities of the music industry – but also something that strives to make the most of the narrative in music, which has become rarer.

Storytelling is the foundation of our mythology, the archetypes of what is moving or dead and what is not impossible. So for me, it’s the only thing that makes sense. I am a storyteller/poet, amongst other things that can’t be named. And this story needed pieces to engage a listener, then take them to a climax, and then give them a bit of thinking time to decide what it all means for themselves. The audience is just assumed, never projected towards. As far as the music industry goes, who knows. It never was my agenda. It is a side effect of our calling, not the end result.

Would you be interested in expanding Seymour’s narrative and stories across other formats, like books for example? That sort of cross media storytelling is becoming easier with the technology at hand.

Yes I’ve contemplated putting the story to another medium. The most ideal would be to film. But a book of short stories that encompass one story is not farfetched either. And at the same time, it may be none of the above.

What’s next for Seymour? I understand the next chapter after this may be the last of his story so far?

The next project is indeed the last chapter of the Seymour story. It is very much the conclusion I was looking for.

As a lyricist what would you say is the power of words?

They say in the beginning was the word, so that means it must be an aspect of the alpha and omega of our existence or at least the language of our evolution. Words can spell, they can liberate, they can conjure. Intention is the relevancy.

In an earlier interview you said that “I believe the beat is inherent in all of us.” If you don’t mind, could you expand on that idea a bit more?

Well it’s not really the beat of a tune that people dance to, it’s the silent beat in between, so that means it has to originate on another plane of existence. You can’t explain a dance move, or any other black characteristic in philosophical terms. It simply is. These things live within those who are rhythm. This beat is in our heart and in our walk, in our blues. Not just sequestered to a studio or stage. No one had to teach me rhythm, it was alive within me from the beginning.