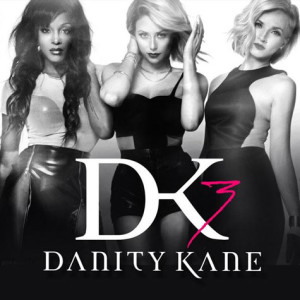 DK3 is an oddity of a record: a comeback album by a non-existent group. Messy drama seems to be an immutable law of every girl group journey, but Danity Kane have set new standards in it. Their first incarnation – formed on TV, disbanded on TV – lasted from November 2005 to January 2009. Their second was a member down before it even began, with D. Woods mysteriously not being invited to reunion talks; preceded its first official single with the loss of another member, Aundrea Fimbres quitting mid-tour; and culminated 15 months in with an alleged mid-meeting punch-up and subsequent accusations of band members sneaking into the studio to remove other members’ vocals. Only the Sugababes could have trumped this.

Unlike the Sugababes’ own reformation, Mutya Keisha Siobhan, Danity Kane Mk II have at least managed to release the album they recorded before the final implosion, whether by contractual obligation or genuine generosity towards the small but vocal online niche of pop fans who willed the comeback into being. The surprise is how terrific it is. Not that there isn’t past form here: Danity Kane’s previous two albums, particularly 2008’s Danja-fuelled Welcome To The Dollhouse, were masterclasses of sleek modern pop, and singer Dawn Richard’s solo career showcased an awe-inspiring artistic vision of singularly vast scope. (Put on hold for this more mainstream comeback, she’s already picked up where she left off – good news, artistically speaking.)

DK3 bears little resemblance to Richard’s solo career, though she’s certainly the group’s most distinctive vocalist, and the singer who most propels the album. Instead, it’s full of ultra-confident and surprisingly varied boss bitch anthems. Given events, songs such as ‘All In A Day’s Work’ should by rights collapse under the irony of lyrics insisting, “I’m makin’ this shit look easy-easy-easy-easy” – but the group as embodied in music, if not reality, pull it off. It’s a paradox: the real Danity Kane have failed to live up to their own lyrics, but the quality of the songs enable a non-existent version of the group to make them convincing.

It helps that ‘All In A Day’s Work’ marries classic ’60s girl group coyness to ’80s power-suit attitude to fully updated scuzzy guitars and trap rhythms with rhymes stacked on top of rhymes, of course; and that ‘Lemonade’ rides the Mustard wave while simultaneously reaching back for a ‘Grindin’ sample and spinning out one of the better anti-hater metaphors in recent memory. (You are lemonade and they’ll give you lemonade.) It’s ironic that their vocal chemistry is on point throughout, Shannon Bex and Aubrey O’Day’s fluttering, cooing timbres complementing Richard’s stronger tones nicely.

Elsewhere, ‘Tell Me’ subverts its sparse, sensual stripper anthem sound with a plea for communication laced with oddly dark imagery. “You want me half-naked in stilettos / Hanging from the shower rod in the bathroom,” coos Bex; it’s more American Psycho than sex kitten. “I shouldn’t have to do that just to have you / So I won’t,” she continues, like a riposte to the creeping misogyny of artists like Ty Dolla $ign and The Weeknd. Danity Kane flip the script on ‘Rage’, too, marrying the kind of swaying hook designed for drunken singalongs with angry, fighting metaphors: “We rage at the party like maniacs” is an odd line in any context, and particularly so when hidden in a feelgood vibe. ‘Rage’ was not one of the two Richard co-writes on DK3, but there’s an echo here of how all life is enfolded into a holy war in her solo work.

A concise ten-song work – shorter than Richard’s debut “EP”, 2012’s Armor On – DK3 benefits from its brevity, whether this was planned or a consequence of the groups’ hands being forced. Even then, there’s still filler: ‘Rhythm Of Love’ is the kind of anaemic pop-house track that one might have reasonably expected to define a comeback from a group who never seemed to have unfinished business hanging over them in the first place (contra, say, Mutya Keisha Siobhan). Take it as an unexpected minor gem, and give thanks that now this interlude is over, Richard can get back to the serious business of her solo career.